Accessibility links
The Story Behind the Shot Heard Round the World On Oct. 3, 1951, one of Major League Baseball's greatest moments took place. In the bottom of the 9th inning, the New York Giants beat the Brooklyn Dodgers 5-4, winning the National League Pennant. Batter Bobby Thomson's three-run homer became legendary. Deborah Amos talks to writer Joshua Prager, who reveals that the Giants had an unusual home-field advantage.

Listen
The Story Behind the Shot Heard Round the World

It's been described as the greatest baseball game ever played, and you don't have to be a baseball fan to mark the anniversary.

It was the first nationally televised sporting event. The two teams: longtime New York rivals, the Giants and the Dodgers. Big shots from the movies, TV, the underworld were there; authors from Steinbeck to Don DeLillo have immortalized the event.

The game ended with a homerun hit by Bobby Thomson off Ralph Branca known as the shot heard 'round the world.

(Soundbite of a baseball telecast)

AMOS: That was announcer Russ Hodges with his famous call. But for years there's been a mystery about the game. Did the pennant winners, the Giants, cheat?

Joshua Prager has written a book about the game. It expands on a front-page story Prager broke in The Wall Street Journal five years ago. In it, he solved the mystery about what happened 55 years ago today at the Giants' home field near the Harlem River.

Mr. JOSHUA PRAGER (Author, The Echoing Green): There was a clubhouse in centerfield at The Polo Grounds that looked out directly onto the field. And the Giants set a coach - Herman Franks, who had been the third base coach -they positioned him in the fourth window there, and they gave him a telescope. And he peered through that window with this telescope at the finger signals of the opposing catchers. And once he had sussed(ph) out the sign, he pressed the button. And that button buzzed a buzzer in the right field bullpen, where the Giant pitchers were warming up.

One buzz was a fastball. Two buzzes was an off-speed pitch. And it was there that a backup catcher - generally, Sal Yvars - relayed the sign to the batter. So pretty much, it went spying the sign, relaying the signal and then relaying it by a hand signal to the batter.

AMOS: So they cheated?

Mr. PRAGER: Yes, they did. Baseball has a sort of strange relationship with the stealing of signs. When you're standing on second base and you're peering in and stealing the sign with the naked eye, baseball not only allows that, it applauds that. But when, on the other hand, you use a telescope, they don't feel that that's appropriate.

AMOS: On that day, of course the fans had no idea what was going on. And you have quite a few remarkable cameo appearances in the book, fans who were either watching or listening to the game that day. You have Frank Sinatra, Jackie Gleason, mobster Frank Costello, bank robber Willie Sutton, Gerald Ford, Steinbeck, Hemingway. Talk to me a little bit about the infamous Dodger fan who was on death row on that day.

Mr. PRAGER: Well, Julius Rosenberg was listening to the game in the death house at Sing Sing. And after the Giants won the game, he wrote a note to his wife Ethel at Sing Sing. He wrote gloom of glooms, the dear Dodgers lost the pennant. And it was amazing how many people - so many of them you just mentioned - did make note of this day, of this game in their diaries and letters to one another.

Steinbeck described it as the greatest ballgame ever played. Willie Sutton, the bank robber, wrote about how he, after the home run, said he was so depressed that he thought of turning himself in. He was around the corner from the police headquarters on Bergen Street in Brooklyn.

So it was a moment that really transcended the ball field.

AMOS: Rumors of cheating in baseball had been around for years, but nobody ever pinned it down. How did you do it? How did you get people to say that they had done it?

Mr. PRAGER: Well, 50 years had passed and I contacted all of the players, all 21 surviving members of the Giants, as well as the one coach, and asked them about this. And little by little, they started to volunteer information. And this sort of eureka moment for me came when a really not well-known utility infielder named Spider Jorgensen mentioned another lesser known player Henry Schenz had had a telescope. And when I found that Schenz' family - Schenz had passed away - they had that telescope.

And I took that to Sky & Telescope magazine, and I said to them - without telling them why I was asking - can you use this telescope to look at fingers 500 feet away? And they told me that in fact it was perfect. That it had an extra lens so that a normally inverted image would actually be right side up, and that the distance was perfect. That it could distinguish fingers that were at least two-tenth of an inch apart, which of course the catcher's fingers are.

AMOS: And Thomson admitted that he knew what pitch was coming?

Mr. PRAGER: When I asked him, well, did you get the signs earlier in that game? He said I don't know why I wouldn't have. He was forthcoming. But when I asked about that very at-bat, what he said was I don't like to think of something taking away from it. And then he said, I'd have to say more no than yes. He waffled. He went back and forth. Finally, when pressed, he said no, he didn't have the sign. The story he has always told is that he was distracted at that moment. That "I wasn't aware of anyone else in the ballpark but me."

To me, I don't really even care if he knew what pitch was coming. I know that the signs were available to him. What I do care about is the effect that holding on to that secret had on him, as well as on Ralph Branca, and the effect that the home run had on millions of Americans.

AMOS: When you first wrote about this in The Wall Street Journal in 2001, people really were mad at you. I have read that an emcee at the baseball writers' dinner said that what you had done was scandalous, because what you did was you messed with the myth of the great American game. How do you answer that?

Mr. PRAGER: Well, it's interesting. The day after my article came out, Ralph Branca called me and he said people don't want history messed with. And I think he's right. And the people who were most upset were not even the fans, they were the old sports writers. And I think perhaps given that these people had written about this moment so many years, they didn't want to see it besmirched.

Mr. PRAGER: Bobby told me that he's always found it difficult to stand beside Ralph Branca because he's been a burden to Ralph, he said. The nice thing for me was that the airing of this secret, although it was a little rough at first, has definitely brought them closer together.

And they are friends. They've appeared for 50 years alongside each other, singing a song that was written just for them, a parody of the song, Because of You, signing memorabilia. They know each other very well.

And they know that if the tables were turned - if Branca had been the hero and Thomson, the goat - this relationship would not have been possible. It's because Thomson is sort of this humble man and because Branca is this proud man that they have been able to stand side by side.

AMOS: Joshua Prager. His new book is The Echoing Green. By the way, the Giants went on to lose the World Series that year. The other New York team, the Yankees, won the series four games to two.

(Soundbite of song, "Because of You")

Unidentified man: (Singing) Because of you there's a star -

AMOS: This is MORNING EDITION from NPR News. I'm Deborah Amos, sitting in for Renée Montagne. 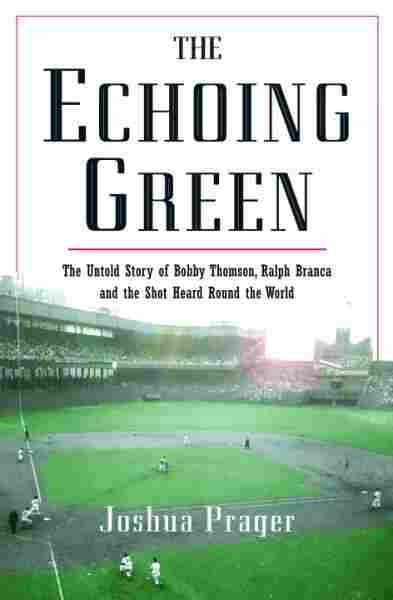 The Untold Story of Bobby Thomson, Ralph Branca, And the Shot Heard Round the World

Title
The Echoing Green
Subtitle
The Untold Story of Bobby Thomson, Ralph Branca, And the Shot Heard Round the World
Author
Joshua Prager