Accessibility links
American Wins Nobel Chemistry Prize American Roger D. Kornberg, whose father won a Nobel Prize a half-century ago, was awarded the prize in chemistry Wednesday for his studies of how cells take information from genes to produce proteins.

STOCKHOLM, Sweden (AP) -- American Roger D. Kornberg, whose father won a Nobel Prize a half-century ago, was awarded the prize in chemistry Wednesday for his studies of how cells take information from genes to produce proteins.

Disturbances in that process, known as transcription, are involved in many human illnesses, including cancer, heart disease and various kinds of inflammation. Understanding transcription also is vital to the development of treatments using stem cells.

Kornberg's father, Arthur Kornberg, won a Nobel Prize in medicine in 1959, also for work in genetics.

The Kornbergs are the sixth father and son to both win Nobel Prizes. One father and daughter -- Pierre Curie and IrGene Joliot-Curie -- won Nobel Prizes in physics and chemistry, respectively. Marie Curie -- IrGene's mother and Pierre's wife -- won two Nobel prizes, for chemistry and physics.

Roger Kornberg's work produced a detailed picture of transcription in eukaryotes, the group of organisms that includes humans and other mammals, the Royal Swedish Academy of Sciences said in its citation.

Kornberg described how information is taken from genes and converted to molecules called messenger RNA. These molecules shuttle the information to the cells' protein-making machinery. Proteins in turn serve as building blocks and workhorses of the cell, vital to its structure and functions.

The 59-year-old is a member of the Stanford University School of Medicine in Palo Alto, Calif.

Kornberg is the lone winner of the 2006 chemistry prize, and the fifth American to win a Nobel prize this year. So far, all the prizes -- medicine, physics and chemistry -- have gone to Americans. 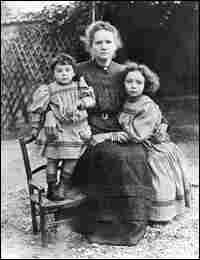 Eve (left) and Irene Curie stand with their mother Marie in a garden. The Curie family has won a total of five Nobel Prizes. AFP/Getty Images hide caption

The father-and-son duo received their prizes for their (separate) groundbreaking work on DNA. Which begs the question: Are Nobel-Prize-winning-genes somehow inherited?

Though that's likely to be the topic for some future Nobel contender, clearly some families have what it takes.

Two brothers and six fathers and sons have won Nobels since the prize was first awarded in 1901. Four married couples have shared the prize together.

Here, a list of some of the relatives that can each pull out a Nobel over Thanksgiving dinner. And you thought bringing that special gravy deserved a prize.

Poor Eve Curie. Her older sister, brother-in-law and parents each won a Nobel Prize. (Her mom won two.) Eve was a writer and musician. Imagine what those backseat car rides were like.

Eve's parents Marie and Pierre won the 1903 Nobel Prize in physics for discovering the elements polonium and radium. Eight years later, Marie would win a second award, this time in chemistry, for continuing to study the effects of radium and radiation.

In 1933, Marie and Pierre's daughter Irene and their son-in-law Frédéric Joliot found that stable elements exposed to radiation were also radioactive. They also discovered several isotopes, including iodine, which was found to treat thyroid syndrome. In 1935, Irene and Frederic shared the Nobel Prize in Chemistry.

Both Marie and Irene died in their 50s from leukemia, after years of radiation exposure.

And Eve? Eve is 102 and recently wrote the biography Madame Curie about the life of her mother.

The appropriately-named Braggs became fascinated with X-rays in 1895, when 5-year-old William Lawrence fell off a tricycle and broke his arm. His father, Sir William Henry, examined the arm using newly discovered x-ray technology.

Twenty years later, the two men became the only father-son duo to share a Nobel Prize, winning in 1915 for their work involving X-ray diffraction and crystallography. The younger Bragg then became director of the Cavendish Lab in Cambridge, where James Watson and Francis Crick discovered DNA in 1953. Watson and Crick were later awarded the Nobel Prize in Medicine in 1962.

Nobel Prize winners are drawn to the Bohr family in the same way electrons circle an atom: through gravitational force.

Dad Niels studied with J.J. Thomson, who discovered the electron and made one of the first models of the atom. He also spent time in the lab of nucleus-discoverer Ernest Rutherford. Both Thomson and Rutherford were later awarded Nobels for their work in chemistry. (Thomson's son also won a Nobel, in 1937, for his work in electron defraction.)

Niels Bohr was awarded a Nobel Prize in Physics in 1922 for his own model of the atom. In his model, a small positively charged nucleus is surrounded by waves of electrons. You might remember the image from your high school chemistry textbook -- it's still the model we use today.

While growing up in Denmark, Niels' son Aage remembers "Uncle" Pauli and "Uncle" Heisenberg, who each won a Nobel Prize for their work in quantum mechanics. Aage would later win his own Nobel Prize in Physics in 1975 for his work involving quantum mechanics and nuclear theory.

In the four years between Jan's win in 1969 in economics and his brother Nikolaas' win in 1973 for medicine, a healthy sibling rivalry most likely ensued in the Tinbergen household. Jan and Nikolaas remain the only brothers to both win the prize.

Jan developed the first mathematical models that could be applied to the social sciences. After World War II, he constructed the first econometric model of the United States, a visual model combining statistics and economic theory. He later developed a model which found that large differences between the highest and lowest income level at a company may be counterproductive for the company.

Nikolaas -- four years younger than Jan -- says in his autobiography that he "was not much interested in school [and] only just scraped through, with as little effort as [he] judged possible without failing."

While scraping through, Nikolaas spent his time outside observing seagulls. His observations led to important observations on patterns of social behavior in animals. He also is credited with reviving the field of animal behavior after discovering that both instinctive and learned behavior is necessary for long-term species survival.

He didn't need to observe seagulls to discover that. Anyone with siblings would say the same.