Accessibility links
'Washington Times' Calls for Hastert to Resign The editorial page of The Washington Times, a small but influential newspaper among conservatives, on Tuesday called for the resignation of Republican House Speaker Dennis Hastert over his failure to report inappropriate communications between an underage House page and former Rep. Mark Foley (R-FL).

An editorial in The Washington Times, a small but influential newspaper among conservatives, on Tuesday called for the resignation of Republican House Speaker Dennis Hastert over his failure to report inappropriate communications between an underage House page and former Rep. Mark Foley (R-FL).

Hastert: Will He Stay or Will He Go? 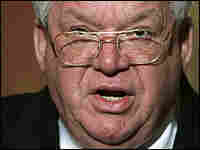 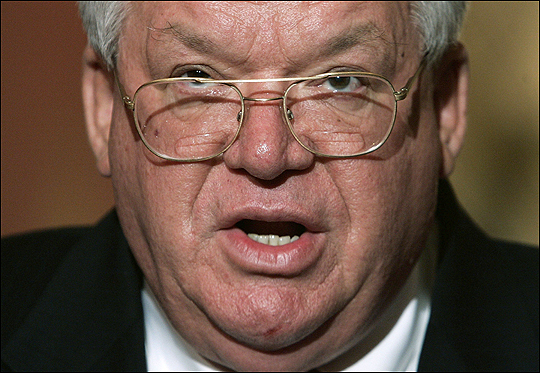 Dennis Hastert at an Oct. 2 news conference on Capitol Hill.

As the surreal scandal spawned by former Rep. Mark Foley's interest in former pages rounds out its first week, the man in the crosshairs is no longer Foley but House Speaker Dennis Hastert.

Foley himself is long gone into the parallel dimension of a rehab clinic, whereabouts unknown. But Hastert is still here and a highly symbolic target.

Hastert has led the House longer than any member of his party in history, yet he is just now becoming a national household word. Talk about a case of bad timing.

Last week, Hastert said that he had only just learned of Foley's hyperactive outreach program for former pages. Then he amended this to say he had seen some iffy e-mails earlier but not the lewd instant messages now familiar to denizens of the internet. Then even that story came under pressure when Kirk Fordham, Foley's former chief of staff, told the Associated Press that he had personally expressed concern to Hastert's staff more than three years ago.

Democrats are calling for investigations and penalties for Hastert and anyone else who knew about Foley's forays and failed to restrain him. But the Democrats are not a problem for the speaker. He can easily ignore such plaints from the minority, as he has ignored so many others over his nearly eight years at the helm.

What is a problem for Hastert is the unrest on his own side of the aisle, both in Congress and in the wider world of conservatism. Calls for his resignation have arisen from several prominent sources on the right, including The Washington Times and a number of GOP-friendly broadcasters. What's more, Hastert's two most senior lieutenants in the House, Majority Leader John Boehner and Majority Whip Roy Blunt, have both said they would have handled the Foley matter differently.

Neither Boehner nor Blunt has called on Hastert to resign; and both say such a call would be premature. But the very fact that they are publicly criticizing their boss' handling of this ultra-delicate matter at such a moment is tantamount to insubordination. And that is doubly so given the strict standards of discipline in the hierarchical House.

Hastert must also contend with the rather lukewarm support he has received from the White House. President Bush told cameras this week that he knew Hastert as a pretty nice guy, but within hours the Bush press operation was telling reporters the president also wanted to let the investigation process play out. The possibility of an adverse outcome for Hastert seemed to be left very much on the table.

Indeed, in the hours after Kirk Fordham's revelation, Hastert skipped a radio talk show date on WGN in Chicago to take part in a conference call that included national Republican leaders. His fate seemed to be very much in the balance at that hour.

This sort of election-eve scandal is like a volcano on the brink of eruption. The party under threat looks around in desperation, searching for someone to offer up as a sacrifice.

But if Hastert is looking vulnerable at the moment, Washington's ruling Republicans will want to pause before rushing him over the edge. Would it really help them to heave Hastert into this particular crater? Or would the volcano be just as likely to blow, sending hot lava down in all directions?

Sacrificing Hastert would, first and foremost, provide another huge headline on the Foley fiasco. All the salacious details would be repeated. The reverberations would continue for days. In fact, the fall of the speaker might lend far more portent to this sordid interlude than anything else possibly could.

Thus decapitated, the House majority would have to have an immediate stuggle to choose a successor. While the Republicans don't strictly need a speaker between now and Election Day, they would need one for the lame duck session that has to meet thereafter (ten of the dozen spending bills for the current fiscal year have yet to be approved).

Besides, if the Republicans tried to limp through the election without a new speaker, it would look like an admission that they did not expect to need one after losing their majority.

Not a good signal to send your troops just before they go into battle.