Accessibility links
Networks Boost Diversity in Some Ensemble Shows Networks are finding that a diverse cast can help broaden a television show's appeal, at least where one-hour dramas are concerned. Shows such as Lost and Grey's Anatomy, which feature characters of various ethnicities, can be seen as models of network diversity. 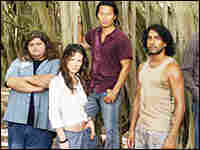 The hit ABC series Lost, which is scheduled to begin its third season Wednesday night, has attracted a huge fan base with its ongoing story about a mysterious group of plane-crash survivors who end up on a strange island.

The cast of Lost has also been held up as a model of the kind of diversity networks should aim for in the future.

Carlton Cuse, an executive producer on Lost, says things in the industry have changed since the late '90s, when he encountered more resistance to casting actors of color.

"I think the networks realize the mold they have had is not working," Cuse says. "Lost is an example of a new mold for the way shows get cast -- hopefully."

The cast of Lost includes blacks, Hispanics and Asians. One character speaks all of his lines in Korean, with subtitles usually provided.

Damon Lindelof, who created Lost with JJ Abrams, says he and Abrams did not create an ethnically diverse cast out of any sense of obligation. Rather, the idea appealed to them as storytellers. Lindelof says starting the series with passengers on an international flight gave them the device they needed.

"That really opened the door for us to go to our casting director and say, 'We have all these characters, bring us people of all nationalities and ages, and we will cast the best actor,'" Lindelof says.

Alex Nogales, president of the National Hispanic Media Coalition, says the success of Lost and other shows with diverse casts, such as Grey's Anatomy, sends a message to network programmers: "Unless you start including minorities in your shows, you are going to be out of a job."

Nogales' organization is part of an umbrella group that has been giving out annual report cards on network diversity since 1999, when the NAACP accused the networks of white-washing their programming. Now, Nogales can quickly list a number of shows with Hispanic actors in prominent roles, including the star of ABC's Ugly Betty.

On the other hand, Nogales was appalled by CBS' decision to begin its new season of Survivor with tribes broken down along racial lines. Also, the NAACP has expressed concern about the lack of leading black actors in new comedies. Mitsy Wilson, vice president for diversity at Fox, says "it was disappointing to us as a network" not to replaced the canceled Bernie Mac Show with a comparable offering.

Wilson points out that 24 was the first network show to cast a black actor in the role of president. She also says it's easier to achieve diversity on reality shows such as American Idol, which draws from a wide pool of participants.

Ensuring diversity behind the scenes as well as in front of the camera is important, notes Wilson. Alex Nogales sees the need for more progress in that area.

"In many cases, if you look at writing stables, you will see people who went to the same schools, came from the same part of the country," he says. "So it is that kind of small group that continues to propel these shows."

But Fox's Wilson says that economic sense continues to drive a commitment to diversity. All the networks are looking for younger viewers -- and to get them, new shows will have to reflect their world.

And this season on Lost, a new character gets added to the mix: a Brazilian.