Accessibility links
Digital Mammogram an Efficient Tool in Cancer Fight The mammogram is the first line of defense against breast cancer. Doctors in state-of-the-art facilities are now reading mammograms off computers instead of film. They say it's more efficient and sometimes more effective than film in detecting cancer. 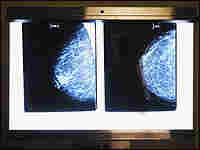 The mammogram is the first line of defense against breast cancer. This two-dimensional X-ray of the breast is a highly effective tool in detecting breast cancer, long before a lump may be felt.

Today, doctors in state-of-the-art facilities are reading mammograms off computers — not film. They say it's more efficient and sometimes more effective than film.

When it comes to digital mammography, think about your camera. The digital photo isn't a lot better than the film version, but its resolution may be a bit more crisp. The benefit of digital is that you can tinker with it until you get the best image possible. So, too, with digital mammography.

"You can enlarge [digital photos], you can change contrast, whatever works best," Basset says.

Not only can you manipulate the image to get the best view, Basset says, you can quickly and easily e-mail it anywhere. This could make a difference if a radiologist wants a colleague's opinion.

Only 8 percent of mammography units in the United States are digital. A recent study of about 50,000 women found that digital mammograms were actually better than film mammograms in picking up cancers in certain groups of women, including women with particularly dense breasts and women younger than 50. Researchers aren't sure why digital is more accurate for these women, but they think it's because digital photos can be manipulated to get a better view.

When cancer is detected, an MRI is often recommended as a second test. Magnetic Resonance Imaging has been around for about two decades, but has only been used for the past five years for breast cancer diagnosis.

MRI is too sensitive to be used for general screening.

"It picks up everything, and there would be far too many needless biopsies," Bassett says.

But MRI is effective "once a cancer has been diagnosed, to determine the extent of the cancer," Bassett says. "That's because MRIs measure areas with particularly high blood flow, and tumors cause increased blood flow because they create new blood vessels, which is how they grow."

MRI can also be effective in detecting cancer among women at high risk ---those with a family history of the disease and those who have already had breast cancer.

Dr. Susan Love, a surgeon at UCLA and a well-known breast cancer specialist, says imaging is getting more and more accurate, but she hopes science will move beyond imaging.

"We focus all our efforts in early diagnosis of breast cancer on imaging, on seeing cancer, seeing it in the breast," Love says. "But the trouble is, by the time you can see it or feel it, it's been there a long time. And really, what we should be shifting to is not finding cancers that are already there but finding cells that are thinking about becoming cancer."

Love heads the Dr. Susan Love Research Foundation, which is now working to detect cancer in the making.

Cancer "begins in the milk ducts," Love says. Her foundation is testing the milk-duct fluid of 100 healthy volunteers, looking at hormone levels, DNA, proteins, normal and abnormal cells and whether there's a correlation between these things.

Understanding what might flip the switch on cancer cells could someday produce a screening tool similar to the pap test, Love says. And a test, together with recent advances in the genetics of breast cancer, could mean that interventions and treatments could be initiated to stop cancer before it begins.