Accessibility links
A Beach Boys Classic Gets an Soulful Makeover Danish musicians Philip Owusu and Robin Hannibal give "Caroline No" an entrancing makeover, capturing Brian Wilson's doleful melody and a gentle acoustic-guitar accompaniment in a cavernous electronic whirlwind, with stargazing bleeps intensifying the song's sense of isolation and grief.

A Beach Boys Classic Gets an Soulful Makeover

A Beach Boys Classic Gets an Soulful Makeover 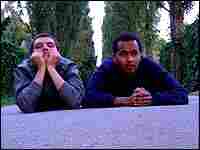 Not many contemporary R&B artists explore The Beach Boys' catalog for material. But while the band's sweet pop music and meek looks seem incongruent with R&B's blues-based sentiments and urban perspectives, there's something undeniably soulful about its lush harmonies and rich melodies. When it's as sensual and melancholy as Pet Sounds' "Caroline No," the group's music fits comfortably alongside the best ballads by Smokey Robinson or Prince.

Owusu and Hannibal both handle the vocals admirably, showing great respect for Wilson's lush and sonically inventive arrangement. By sneaking in an effective electric-bass bump beneath the soaring vocals and an implied backbeat, the duo may well turn The Beach Boys into the R&B hitmaker few knew it could be.