Accessibility links
NATO Beats Taliban in Battle, Works to Win War The Afghan people are looking for security and displays of strength, according to U.S. Army Col. Steve Williams. He is a deputy commander of NATO forces in Afghanistan. Williams tells Renee Montagne that the military cannot win the war in southern Afghanistan without winning the hearts of the people.

The Afghan people are looking for security and displays of strength, according to U.S. Army Col. Steve Williams. He is a deputy commander of NATO forces in Afghanistan. Williams tells Renee Montagne that the military cannot win the war in southern Afghanistan without winning the hearts of the people. 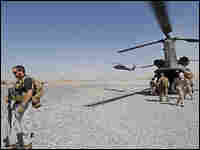 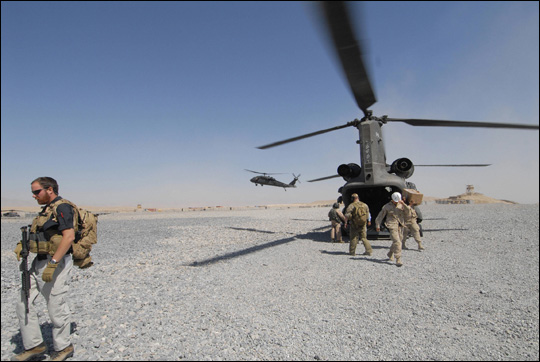 RENEE MONTAGNE: Hi, Steve. You'll hear from my voice that I'm a dust storm away from that interview with Ahmed Rashid. Sorry for the hoarseness.

MONTAGNE: Oh, not to worry. We'll try to avoid keeping you speaking too much. But, I understand you did speak with the deputy commander of NATO forces in the south?

MONTAGNE: Yes, Steve. I wanted to get a view from the ground here. Though, in fact, our conversation began in the air with a helicopter tour of the area, down to the border with Pakistan. And the helicopter was flown by Dutch pilots, who are here with NATO ISAF, or the International Security Assistance Force.

After we touched down, I asked U.S. Army Colonel Steve Williams - that's the NATO Deputy Commander - about the border area we'd just seen. And this is a vast, empty desert leading into impenetrable mountains - the sort of thing you see in pictures about Afghanistan - impossible really, to patrol.

Colonel STEVE WILLIAMS (Deputy Commander, NATO): You've got these caves and these systems that these guys can in and cache weapons systems and then find other ways to come across the border, go to these cache sites and arm up.

And that's part of our problem operating on the border is, you can meet some really great infiltration routes, you can stop a whole bunch of males moving across that route. But if they don't have weapons and they're not aggressive, and they have fake work documents, you really can't do anything with these guys.

MONTAGNE: And Steve, Col. Williams agreed with what Ahmed Rashid said just a few moments ago, that the battle has been won in the southern village - for now - but the war, he thinks, is far from over.

Col. WILLIAMS: You know, a lot of people want to know body counts. They want to know the number of Taliban killed. But in an insurgency, a body count doesn't count. I mean, you have to look at the objectives. And the objectives for taking Panjwai and Pashtul(ph) were seized from the Taliban. And now we have ISAF NATO forces operating in that region and they're starting to develop security and provide humanitarian assistance.

MONTAGNE: Do the villagers want you there? Panjwai, for instance?

Col. WILLIAMS: You know, the biggest thing with the Afghan people is they just want somebody there to provide security. And you know, you know, and of course they're going to say things in front of you to make you like them, and make you think that they like you. They're going to, you know, a lot of them say the Taliban take, they never give. That the coalition gives.

We're going to help reconstruct the areas that were destroyed. We're rebuilding schools, we're identifying roads, which will employ the people in that area, which should keep a lot of the local fighters that usually just fight because the Taliban come in and pay them - keep them employed to do jobs, to reconstruct their villages, and rebuild their villages.

So we're not brutal to the people. It's just they like to see strength. So you have to come in there and show strength. You have to show a positive light with everything that you're doing there with them. You have to talk with the elders. You have to work with the tribal systems, and then include the government of Afghanistan to put that afghan face on it.

MONTAGNE: How many people were driven out during these, this battle - and there were previous battles - and how many people have come back?

Right now, you may have about 2,000 that are in there right now, living in their homes and maybe one to 2,000 more that are coming in, in the day, working on their farms, and then going back at night to a safe haven. You know, most of the people really won't come back until they see that the ISAF NATO forces have made a commitment to stay and that they've seen that it's secure, and that we have a commitment to not allow the Taliban back into the area.

MONTAGNE: That's Col. Steve Williams. He's Deputy Commander of NATO forces in the south, speaking with me here in Kandahar.

INSKEEP: Okay, Renee, thanks very much. Get lots of that hot, Afghan tea, okay? We'll be hearing from you again on Monday.

And Renee will be talking to Afghans about memories of the night the bombs first fell: October 7th, 2001, five years ago this weekend.