Accessibility links
Mondello's Movie Picks As we do each Friday, here are Bob Mondello's picks for this week: Little Children, Shortbus and The Departed. 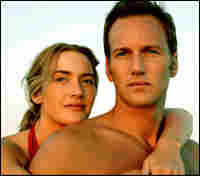 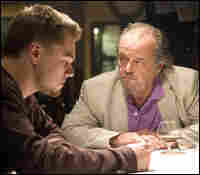 As we do each Friday, here are Bob Mondello's picks for this week:

Little Children: Sara (Kate Winslet), who fancies herself a modern-day Madame Bovary, lurches into an affair with a handsome stay-at-home dad, whom everyone calls the Prom King (Patrick Wilson). They're overgrown children in a suburban playground that has lots of menace lurking at its fringes: a bully who used to be a cop and a pedophile who terrifies the neighborhood when he moves back in with his mother. Lots of arrested development in a satire that develops into something more telling. Todd Field, whose first feature film was In the Bedroom (this is his second) worked with novelist Tom Perrotta (author of Election, which was also a smart satire) to make sure the film not only makes you laugh, but makes you queasy about laughing. Full review on ATC tonight.

Shortbus: John Cameron, the maker of Hedwig and the Angry Inch, has crafted a pan-sexual romp designed to make that other fever dream of a film look downright tame. Sex -- unsimulated, and definitely un-interruptus -- is both the story and the storytelling method of this precedent-busting comedy that focuses on the clientele of a sex club that feels like a really outre coffee bar. The film begins with a montage of wildly varied sexual acts, and climaxes (pardon the expression) with the unsurprising revelation that love and sex are two different things. Most people old enough to get in (the film is rated NC-17) will already know that, of course, but Cameron's film certainly takes a new tack in explaining it. His cast of mostly non-actors is game and attractive. You meet a sex therapist who's never had an orgasm, a gay couple looking to become a threesome, a whip-toting disciplinarian who is putty beneath her tough exterior, and together with a half-dozen other principals and lots of attractive extras, they copulate in about as many different locales, combinations and styles as can reasonably be crammed into 90 minutes. The film is gentle, generous, sweet and a tad too strenuous to be as loose as it wants to be.

The Departed: With its overcrowded marquee -- Damon, DiCaprio, Nicholson, Wahlberg, Sheen -- and Martin Scorsese as the real draw for gangster flick fans anyway, this crime thriller is a profane, blood-drenched joy to watch. Based on a terrific Hong Kong thriller (Infernal Affairs) that felt like a riff on Scorsese films to begin with, The Departed chronicles the intertwined travails of an undercover cop (DiCaprio) who infiltrates a crime boss' operation, even as an undercover gangster (Damon) finds a spot with the police. When their various subterfuges suddenly start coming unraveled, each smells a rat, and embarks on a furious struggle to unmask the other guy before getting unmasked himself. The plot may have a twist or two too many -- the frenetic last reel is a real head-spinner -- but the performances are so richly conceived, the editing so sharp, the tension so taut that no one's going to quibble. Scorsese's best in years.