Accessibility links
False Promises: Adoptive Parents with No Children Prospective parents are offered quick turnaround adoptions for a high price by Internet-based adoption agencies, only to have the rug pulled out from under them. 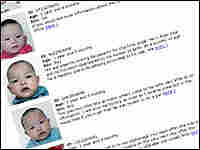 Some internet adoption agencies may offer parents quicker turn-around times but in the end fail to deliver. hide caption

More families have been tricked into another adoption scam, this time through the Yunona Agency. The agency's Web site has been used to prey upon prospective parents.

Parents have traveled around the world to meet their pre-selected child only to discover a mess of red tape, forcing them to leave empty-handed.

In some cases, local laws prohibitted parents from adopting because they had pre-selected their child. In others, the parents arrived and found that there were other factors, such as siblings not willing be separated, that had not been mentioned by the agency.

Although parents have to go through legal hoops to adopt, the adoption agencies face very little legal scrutiny.