Accessibility links
School, Study, SATs: No Wonder Teens Are Stressed This is the season of college applications and high-stakes entrance exams. Tens of thousands of teenagers are pushing hard to do well. Many, though, are overworked, overscheduled and overstressed -- and it's taking a toll on the mental health and development of a number of teens. 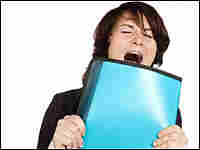 A report from the American Academy of Pediatrics says more and more teens are being sidelined by pre-college pressure. iStockphoto.com hide caption

This is the season of college applications and high-stakes entrance exams. Tens of thousands of teenagers are pushing hard to do well. Many, though, are overworked, overscheduled and overstressed -- and it's taking a toll on the mental health and development of a number of teens.

The American Academy of Pediatrics is sounding the alarm in a new report. The report emphasizes that the majority of teens are doing just fine, despite the intense pressure and fully booked schedules. But adolescent-medicine specialist Kenneth Ginsburg, who authored the report, says more and more teens are being sidelined by anxiety and depression.

Marilee Jones is the mother of a teenager and the dean of admissions at MIT. Personally and professionally, she understands exactly what Ginsburg is talking about.

Jones vividly recalls a moment when her daughter, now a college freshman, was in 7th grade.

The doctor told Jones that stress might be the culprit. "And that there was nothing wrong with her," Jones says. "It was all coming from me."

From her own parenting experience as well as from interviewing thousands of teens for college admission, Jones has come to the conclusion that our children are under way too much pressure. They're far too busy -- and highly stressed -- all in the service of getting into college.

"I've been in school for three weeks and already it's really hectic, because you get thrown into all this college stuff," says Tom Poulis, a senior at University High School in Southern California. "And people are always telling you, 'Apply here.' And when are you going to take your SATs? And on top of that I'm taking four AP classes. So already, the stress level is very high."

Then there are his extracurricular activities. Poulis is president of the debate club, an officer with Amnesty International, and a student representative on the Associated Student Body Cabinet, to name a few.

Poulis is certain that colleges are looking for hard-working, fully committed students. But he's not just trying to rev up his resume. He says he enjoys all his activities and courses. And he gets no pressure from his parents to carry such a large load.

Like Tom, Rachel Ferrell is in 12th grade. She loves high school so much that when she wakes up in the morning, she actually wants to go to school.

Nevertheless, the race has begun.

"We have to start looking at scholarships and we have to start narrowing down our schools that we want to go to and looking at deadlines," Ferrell says. "Because there's a lot of deadlines, like in November, if you want to do early decision or early action, or get financial aid, or whatever."

Ferrell thinks she wants to go into the arts but hasn’t yet decided where she’ll apply.

"And I'm freaking out because of the money," she says. "It's just so expensive to go to school. I mean, $40,000! It's just so ridiculously overpriced."

Chelsea Halprin, a junior, hopes to apply to Columbia or Harvard. She has a nonstop schedule: homework, class president, team sports, mentoring younger students, helping at her synagogue. But she worries that in spite of all she does, it might not be enough.

And she has a point.

"This is sort of the peak of the demographics," says Marilee Jones, the MIT dean of admissions. "So when people feel anxious about the competition and worry that, 'Oh no, there are just so many people applying to college,' they're right. That's a true anxiety they feel."

That anxiety can take a toll on health, says adolescent medicine specialist Ginsburg. He sees many teenagers whose bodies show the signs of stress, whether it's headaches or chest pain or belly pain.

"At the extreme -- and I want to emphasize that this is the extreme – we're seeing more kids who are engaging in self-mutilation," Ginsburg says. "[It's] a way of taking control over their life when they feel their life is out of control. And I see quite a few kids with eating disorders. It's kids who just feel like they can't handle everything they're doing."

There are other, less obvious concerns. Jones believes that creativity and innovative thinking are taking a hit.

"Because students are so busy all the time, because parents think that's what they need to get into college, and we in college admissions officers reinforce that, they don't get into their imagination enough," Jones says.

Her remedy: "Let's free up a lot of kids to be able to do that and not force everybody to have all of those AP classes and all of those activities."

Meanwhile, the stress just keeps on mounting. "One of my friends," says Poulis, "She just one day was like, 'I'm tired of school. I'm tired of feeling bad about having, like, a 3.6 GPA. Tired of being in an environment that demands so much of you. And tired of an environment where the level of your character is determined by your SAT score."

To help teenagers cope, the American Academy of Pediatrics is launching a new Web site where teens can go and design their own stress-reduction plans, described by the doctors as a “prescription for balance.”