Accessibility links
Schwarzenegger Woos California's Blacks, Latinos California's black and Latino voters would normally be considered supporters of the Democratic nominee for governor, state treasurer Phil Angelides. But many of those voters are expected to cast their votes for the current Republican governor. 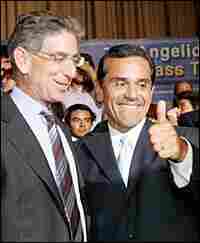 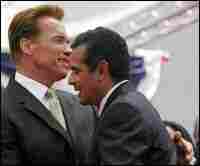 California's black and Latino voters would normally be considered supporters of the Democratic nominee for governor, state treasurer Phil Angelides. But many of those voters are making a different choice this time around and are expected to cast their votes for Republican Gov. Arnold Schwarzenegger.

One reason is that the California gubernatorial race is lacking a hot-button issue or the kind of political fireworks that prompt regular voters to pay attention. Others believe the Democratic Party is taking the minority vote for granted.

The Ladera area of Los Angeles is home to several middle-class black neighborhoods, and voters there have traditionally cast their ballots for Democrats. But some, like federal investigator Brandi Nichols, are starting to rethink that.

"I feel pretty much that Democrats think they have the black vote, so they really don't feel as if they have to do anything," Nichols says.

The Schwarzenegger campaign is capitalizing on voters like Nichols. To woo Democrats who might consider crossing party lines, Schwarzenegger has made a point of stopping in black neighborhoods, and especially churches, to make personal appearances.

The California governor has also made inroads into other traditionally Democratic Latino strongholds. He's made several visits to East Los Angeles, and nearby heavily Latino cities like Southgate and Montebello, in an effort to win over voters.

But Angelides campaign official Sam Rodriguez says Schwarzenegger cannot be trusted. "He'll say anything he needs to say, appear anywhere he needs to appear, as long as he doesn't take any questions," Rodriguez says.

Some Angelides supporters also point to Schwarzenegger's ties with big business. "He's not on our side," says Angelides supporter Angela Jimenez, who thinks Democrats are more worker-friendly. "Us poor people need someone who will help us progress."

Even in San Francisco -- a die-hard Democratic city -- there is growing support for the governor's party, because Schwarzenegger is seen as a force helping to change the GOP's national agenda.

"The problem with the Republican Party is that it doesn't reflect California," says immigration consultant and GOP backer Leo Lacayo. "The benefit [Schwarzenegger] brings to the party... is that he is changing that party.

"Republicans are starting to say 'You want power? You want to change things? You better be a little bit more moderate -- better be taking into consideration all of these other people, and [the party] better be really open to the other people," Lacayo says.

The Rev. Amos Brown, pastor of San Francisco's Third Baptist Church -- one of the city's oldest black churches -- is a life-long Democrat. But he has declared his personal support for the governor, saying a vote for Schwarzenegger is not a vote for the Republican Party. "We don't talk the same language at all," he says.