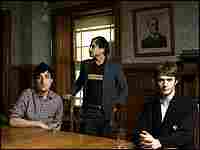 Upon first listen, the Brooklyn experimental-folk band Grizzly Bear might seem to have named itself somewhat disingenuously: The group's sound — spare acoustic melodies over plaintive piano figures and dusty strings — isn't exactly what springs to mind when one contemplates the massive and awe-inspiring grizzly. But the name begins to make sense after a while: The hushed, melancholy songs carry with them enough emotional power and grandeur to earn their name.

Grizzly Bear was the name Edward Droste gave to his psychedelic home-recording experiments; the resulting album, 2004's Horn of Plenty, was only meant for some of his close friends, yet quickly made the rounds in underground circles. The demand for the record was such that it was reissued as a double album in 2005, during which time the group expanded to include three additional members on guitar, reeds and electronics.

Grizzly Bear's gorgeously hazy second disc is a major leap forward: Titled Yellow House, it benefits from a monumental upgrade in production values, as well as the presence of tight, focused songs that place the band's experimental tendencies into a more natural-sounding melodic context.