Accessibility links
Gallaudet's President Struggles with Protests I. King Jordan is a towering figure in the deaf community, because 18 years ago, he became the first deaf president of Gallaudet University. But ongoing student protests at the university are threatening Jordan's legacy. 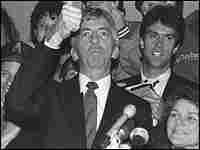 Deaf Culture on Talk of the Nation

In a special edition of Talk of the Nation, a discussion about the future of deaf education. In the second hour, the debate over cochlear implants continues. 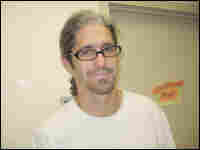 Ryan Commerson is one of the student leaders of an organized protest at Gallaudet University. Joseph Shapiro hide caption

If you are hearing impaired and would like to request a transcript of an NPR story or program, please contact NPR at (202) 513-3232 through a relay operator.

NPR transcripts at no charge

Protests continued to grow Wednesday at Gallaudet University as students blocked all entrances to the campus, forcing the cancellation of classes and midterm exams. Gallaudet's current president I. King Jordan has angered the protestors with his strong support for the woman who was named to succeed him.

In 1988, students at Gallaudet –- a tiny 1,100-student school for deaf students in Washington, D.C. -- shut down the campus and demanded that the president of their school be deaf. After Jordan was named the first deaf president in the school's history, he met with a room full of adoring students.

That night, Jordan praised the students as they repeatedly chanted his name.

"And I must give the highest praise to the students of Gallaudet for showing exactly how, even now, one can seize an idea with such force that it becomes a reality," he said.

Jordan ends his presidency after this semester, and the atmosphere on campus was supposed to be celebratory. Instead, the students, many of whom were infants when Jordan was first appointed, boo Jordan wherever he goes.

Last week, an art gallery was renamed for Jordan's wife Linda, an artist who has expanded the arts programs on campus. King and Linda Jordan brought their children and 9-year-old grandson to the dedication.

But protesters came too, carrying a black coffin painted with the word 'justice'. Jordan was coated in orange juice and Linda Jordan was jeered by the crowd after she was introduced.

King Jordan is a gregarious man, known for his big, white smile. But now, after months of protests, his eyes are sad.

"Oh I am hurt, I'm deeply, deeply, deeply hurt," says Jordan. "I've been at Gallaudet for 40 years. I came in as a freshman in 1966. I love Gallaudet. I really, really cherish [and] value the students, even those who disagree with me."

Jordan has been a successful president, developing new buildings with cutting-edge architecture so that deaf students can sign to each other from far away. But the main classroom building is shut down right now. After the protests at the dedication ceremonies last week, students came here and took it over.

"When I was a kid, I was amazed at the concept that there could be a deaf president," says Ryan Commerson, an on-campus protest leader.

Commerson says that many students resented Jordan after he asked students this week to end the protest and reopen the main classroom building.

They feel betrayed," Commerson says. "He tried to stop us from protesting and protesting is what got him in the position he's in, in the first place."

The protesters want to stop Jane Fernandes, chosen last May by the board of trustees, from becoming the next president. Fernandes is an experienced Gallaudet administrator and Jordan has become her most vocal supporter. He says she has the ability to bring the school together.

But many students and faculty find her cold. They say she is not identified enough with deaf culture and they question her leadership in the past, asking whether Fernandes or Jordan have done enough to hire professors who are better at signing.

Jordan says it's not always easy to find good teachers who are also excellent signers. When he was a student here 40 years ago, almost no professors could sign fluently.

"Now there are many deaf professors and many hearing who can sign fluently," he says. "Of course, there are still professors who are still learning to sign. And all of us want to see that continue to improve."

In some ways Jordan is a victim of his own success. Students expect more today because Jordan raised those expectations. As the symbolic first deaf president at Gallaudet, Jordan showed deaf students that they could do far more than the traditional jobs: running noisy machinery or teaching deaf children.

And Gallaudet is no longer the only option for deaf students; federal disability law now requires all universities to provide sign-language interpreters. King Jordan was integral in those Congressional efforts.

It's not clear what percentage of students and faculty support the protest. But for now, the university remains shut down.

Others Weigh In on Gallaudet Protests

A faculty member and former student at Gallaudet offer their opinions on the current protests.

H-Dirksen Bauman is a professor of deaf studies at Gallaudet. He’s a hearing person who got into deaf education when he landed his first teaching job at a school for the deaf. After falling in love with the lyrical beauty of sign language, he now teaches classes about poetry and literature composed entirely in American Sign Language. He's torn about the current protest and compares it to the 1988 demonstrations, called "Deaf President Now" for the rallying cry of that time.

"This is, I think, probably the most difficult time that this university has faced. It’s far more difficult than "Deaf President Now," because the issues with "Deaf President Now" were clear-cut – it was either hearing or deaf leadership. The entire United States and actually the entire world rallied behind Gallaudet. It was a great news story that everyone could agree with. [But now] this is a very complicated time. The issues around it can’t be boiled down to simple matters of identity, can’t be boiled down to simple matters of “not deaf enough."

"I think "Deaf President Now" in some ways is over-emphasized in deaf history, because people began to think that [it] has solved our problems –- we have a deaf president -– when the issues are actually much deeper … [Deaf President Now] only went so far and didn’t come down to the level of issues relating to sign language use on campus, relating to issues of deaf equality."

Bridgetta Bourne-Firl was one of the four student leaders who led the "Deaf President Now" protests in 1988. Those events forever linked Bourne-Firl with I. King Jordan, who became the university’s historic first deaf president. The two remained friends and allies, but have split over the recent controversy over the naming of Jane Fernandes, a Gallaudet administrator, to take over from Jordan when he retires at the end of this year.

"Once he became president, then he became a spokesperson for the deaf community and also for civil rights for deaf people. He became the icon. All over the world, everyone kind of looked up to him. In awe of him. He was a wonderful role model for many, many, many years for many people all over the world. I think he’s lost his momentum. Now, he’s no longer a civil rights leader for the deaf community."

"I wrote him a letter this summer. I hand-wrote letters. I begged him to separate himself, to separate himself from that [his support of Jane Fernandes], to preserve his legacy.... I saw him at a conference in the summer. He said, "'I disagree with you.'"

New President Faces Opposition at Gallaudet May 6, 2006
Gallaudet Protesters Meet with New President May 8, 2006
I. King Jordan: Reflections on a Changing Culture April 30, 2006
As Deaf Culture Changes, So Do the Questions Oct. 12, 2006