Accessibility links
AIDS, Other Diseases Create Poverty Trap in Africa An estimated 2 million Africans die each year of AIDS, and 24 million are infected with HIV. Malaria, cholera and even polio are on the rise in Africa, all hampering social and economic development on the globe's most impoverished continent. 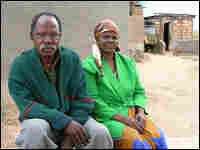 Shote Maseko and his wife Josephine look after their eight grandchildren, who are AIDS orphans in Swaziland. Maseko says he never expected that at the age of 66 he'd be raising young children. Jason Beaubien, NPR hide caption 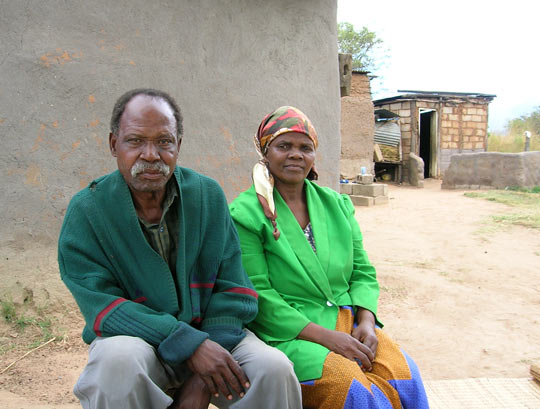 Shote Maseko and his wife Josephine look after their eight grandchildren, who are AIDS orphans in Swaziland. Maseko says he never expected that at the age of 66 he'd be raising young children.

It is our prayer to God that we live long enough to see these children grow up so they are able to help themselves. 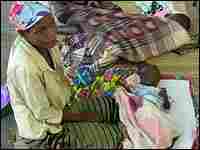 An HIV-positive mother and her child at a hospital in Manica, Mozambique. Charlayne Hunter-Gault, NPR hide caption 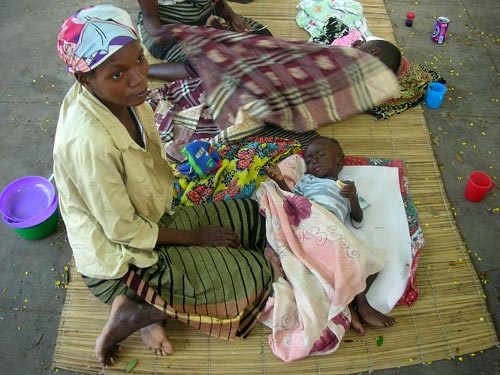 An HIV-positive mother and her child at a hospital in Manica, Mozambique.

The United Nations estimates that 2 million Africans die each year of AIDS, and 24 million are infected with HIV. Incidents of malaria, cholera and even polio are on the rise in Africa, all undermining social and economic development on the globe's most impoverished continent.

Swaziland is a tiny kingdom of just a million people squeezed between South Africa and Mozambique. It's also the country with the highest HIV rate in the world.

At some prenatal clinics, more than half the women are HIV-positive. About 33 percent of adults in Swaziland are infected with the virus.

Even before the AIDS pandemic, Swaziland was in the ranks of the world's least-developed countries and HIV has contributed to keeping it there.

Pindile Polatwana, 27, was forced to quit her job in a textile factory because she was having trouble breathing.

"I was sick. They said I've got TB. Then later they told me I'm HIV-positive," she says.

Polatwana moved back in with her mother in a cluster of ramshackle buildings in southwest Swaziland. She says HIV has devastated her homestead. In the past five years, her father passed away after a long illness, two of her siblings died of AIDS and Polatwana has become so sick she can no longer work.

AIDS wipes out some of the most productive members of society in the prime of their lives.

Pindile's siblings who died were the most educated members of her family and they both passed away at the age of 32. Her family now relies on relief supplies from the World Food Program to survive.

HIV is among many health problems plaguing Africa. The continent spawned Ebola and the Marburg virus. Sleeping sickness, river blindness, yellow fever, cholera, bilharzia, tick bite fever -- diseases unheard of in the developed world -- are all too common in Africa. Polio is making a comeback in Africa after being on the verge of being wiped off the globe. And malaria alone kills nearly 1 million African children each year.

Jon Lidon, with the Global Fund to Fight AIDS, TB and Malaria, says malaria places a huge burden on Africa.

"It reduces productivity severely," Lidon says. "It takes resources away. It reduces school attendance. [It] kills off children, which has all sorts of other negative consequences. And it makes whole areas of Africa unsuitable for intensive foreign investment."

He adds that dilapidated health-care systems are unable to deal with the continent's numerous medical problems.

Clinics are ill-equipped and underfunded. In the Congolese capital Kinshasa, for instance, patients must purchase their own medical supplies before being admitted to the central hospital because the facility doesn't even have bandages.

The continent also has a serious shortage of medical professionals. Malawi has only 130 doctors serving a country of 12 million people, Lidon says.

Africa needs a huge influx of foreign aid to build up effective health-care programs, he says.

"There are countries that spend $10, $12, $15 per capita a year on health," Lidon says. "You can't buy anything for that -- a couple dressings, a few medicines. You cannot run a health system at that level of funding."

The Global Fund was launched in 2002 to provide billions of additional dollars to combat AIDS, TB and malaria in Africa and the rest of the developing world. Lidon and others acknowledge that the battle against these three diseases still has a long way to go.

Disease is part of the poverty trap in Africa. People get sick because they're poor. And they get poorer because they're sick. A man can't afford health care, he's condition worsens until he can't work, and soon his entire family is malnourished as a result of his illness.

Or even worse, the primary breadwinners of a family could die.

In Swaziland, 66-year-old Shote Maseko says HIV has surrounded him in recent years.

Maseko has just come home from helping prepare funerals for three of his neighbors who died of AIDS. He points to a shack in an adjoining plot and says that the woman there just lost her husband to the disease.

Maseko and his wife live in a simple three-room house without electricity or indoor plumbing. Over the past four years, the couple lost three of their adult daughters to AIDS. And they now look after eight orphaned grandchildren; the youngest is three years old.

Maseko lost a leg years ago in an accident at a sugar plantation where he used work. Now in his old age he tries to grow food to feed his vastly expanded family but he says his fields don't produce enough to last the entire year.

His wife Josephine opens the door to the room where six of the eight children sleep. There are two beds. Three children sleep per bed.

Maseko says other members of the family don't want to get involved with the orphans because they're afraid they'll get stuck with them when he and Josephine pass away.

And when that happens, Maseko says he doesn't know where the kids will go.

"We are so worried, and it is our prayer to God that we live long enough to see these children grow up so they are able to help themselves," he says.