Accessibility links
Dr. Slava Fyodorov's 'Beautiful Eyes' Many surgeons had tried before, but Soviet Russia's Svyatoslav Fyodorov was the first to perfect a surgical procedure that corrects nearsightedness. He had a vision: "Beautiful Eyes for Everyone." And once Gorbachev came into power, Fyodorov began exporting his surgical technique around the world. 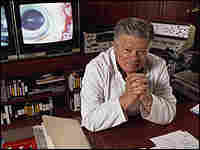 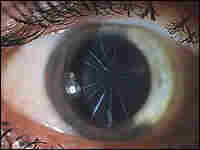 Incisions from an RK surgery radiate from the center of the eye. Courtesy James Salz hide caption 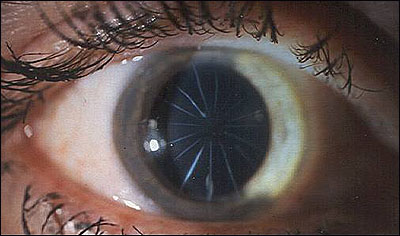 Incisions from an RK surgery radiate from the center of the eye.

Your Questions on Eye Surgery

UCLA's Dr. Rex Hamilton and USC's Dr. James Salz discuss Lasik's success rate, side effects, and the need to tailor expectations to the condition of your eye.

Read their responses to listener questions.

Laser surgery revolutionized eyesight correction 10 years ago, and as the technology improves, so do the options. Two new Lasik techniques are making it easier to customize the procedure for the needs of each patient.

The first medical procedure that had millions of people throwing away their glasses was pioneered in Soviet Russia. Many surgeons had tried before, but Svyatoslav Fyodorov was the first to perfect radial keratotomy, or RK, a surgical procedure that corrects nearsightedness.

Fyodorov's story is the stuff of medical myth. A little boy gets in a fight and breaks his glasses, cutting his eye. All of a sudden, he could see better. The little boy's doctor, Fyodorov, asked himself, if accidental cuts can improve vision, what could precision cuts do?

The story may or may not be true. It's more likely that Fyodorov, as creative a salesman as he was a surgeon, probably read about botched RK attempts in the medical literature and got to work.

"He hated glasses," says Emilia Reznik, who was an ophthalmologist in Fyodorov's Moscow clinic in the early 1980s.

Fyodorov, who also pioneered one of the first successful artificial lens implants, spent half a dozen years experimenting with radial keratotomy.

Practicing at first on rabbits, he deduced the correct number and length of cuts needed to reshape the cornea and deliver 20-20 vision. He also designed a special diamond blade critical to the procedure.

"He found that you had to make the incisions precise and deep," says Dr. Jim Salz, a USC ophthalmologist who tested Fyodorov's procedure in the United States in the 1980s. "The typical surgery was eight to 16 of these incisions made with a guarded diamond blade, in effect in the pattern of the spokes on a wheel."

But the Soviet bureaucracy had stymied Fyodorov's vision of medical clinics all around the world, offering "beautiful eyes for everyone," as he told CBS' 60 Minutes in a 1989 interview.

"Gorbachev, he understood immediately. That's why everything which I asked, I received," Fyodorov told 60 Minutes' Morley Safer.

And Fyodorov was filled with ideas about how to commercialize RK.

He had a medical ship that sailed around, offering RK to high-paying clients in the Middle East. He set up a special hotel for patients right next to his Moscow clinic. He also set up clinics in Soviet-friendly countries, running them like medical factories.

"It was like a conveyor belt where patients would lie down on the bed," Salz says, "and it would slide through a stainless steel door and the patient would stop at the first surgeon under a microscope."

Each surgeon performed a specific task, and then the conveyor belt brought around the next patient. A chief surgeon -- occasionally Fyodorov -- supervised from a video-control room.

For Soviet citizens, RK was cheaper than glasses. The government paid for their surgeries, while money from foreign clients helped pay for staff training and cutting-edge operating rooms.

The waiting list for RK was two years long, and Fyodorov wanted to open more clinics. People accused him of being a shameless self-promoter.

"He was one of the first in Russia to understand that publicity made prosperity," Reznik says, "And I would say, my own opinion, he didn't do it for anything esle, he just wanted to get rid of those (waiting) lines for the surgery."

During the 20 years RK was popular, more than a million people had the procedure in Russia and in the United States. Eventually, its flaws were revealed. The procedure was unstable and some of those who had been nearsighted became farsighted.

By that time, Fyodorov was well on to the next innovation: laser eye surgery. And though he was no longer a leader in the field, Fyodorov had become one of post-Communist Russia's first millionaires. He even made a bid for the Russian presidency in 1996.