Accessibility links
Building Power Through Electronic Repetition On "Come Out," tightly sequenced sounds and a rigid snare-drum beat provide a sturdy base over which 120 Days' members layer groaning drones, phased melodies and Adne Meisfjord's snotty vocals. The Oslo band eschews guitars on this nine-minute single, but it puts the "rock" in synth-rock.

Come Out, Come Down, Fade Out, Be Gone 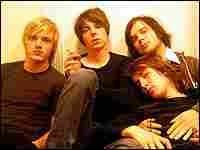 The Norwegian band 120 Days eschews guitars, but its music doesn't want for them. hide caption

The annual NuMusic festival in Stavanger, Norway, is a showcase for experimental electronica, but one of its most memorable sets in recent years featured a rock band. That's not to say there was a single guitar on stage with 120 Days: The lineup consisted of a bassist, a drummer/drum machinist and two synth players, one of whom was enfant terrible singer Adne Meisfjord, who spat beer and preened like Bobby Gillespie in his Primal Scream prime.

There's not an overt six-string on the Oslo band's nine-minute single, "Come Out (Come Down, Fade Out, Be Gone)," either, but that doesn't mean 120 Days doesn't synth-rock — and synth-rock hard. Like Pink Floyd's keyboard-driven interstellar overdrives and Neu!'s kosmische musik, 120 Days builds power through repetition. On "Come Out," tightly sequenced sounds and a rigid snare-drum beat provide a sturdy base over which the band layers groaning drones, phased melodies and Meisfjord's snotty vocals.

Gillespie, Suicide's Alan Vega and The Jesus and Mary Chain's Jim Reid all rank among Meisfjord's primary influences, and all of them go back to the roots of rock for their black-leather-jacket charm. When Meisfjord sings, "Here comes 2-0-0-6 / I pray this year I'm going to get my kicks" over ping-ponging synthesizers, it's easy to imagine Gillespie, in all his Ecstasy-fueled, Screamadelica-era glory, shaking his shaggy hair in approval.