Accessibility links
We're All Different in Our Own Ways By all outward appearances, Joshua Yuchasz is a regular teenager. But his classmates still tease him about the thing that makes him different. Yuchasz believes it's our differences that deserve respect.

Listen
We're All Different in Our Own Ways 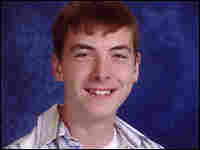 Fourteen-year-old Joshua Yuchasz is a high school freshman in Milford, Mich. He plays in his school's concert band and on its football team. In addition to Godzilla, Yuchasz likes other reptiles, including Bubba, his pet red-tailed boa constrictor. Photo courtesy of Randee Yuchasz hide caption

I believe it's important to accept people for who they are.

Differences are important and they should be respected. For example, many important people throughout history were considered different, such as Thomas Edison, Albert Einstein, Harriet Tubman, Peter Tchaikovsky and Abraham Lincoln. They did great things, but some people thought they were weird because they had strong feelings about something. I can relate to these people because I've been in that situation before, many times.

It all started in elementary school when I realized that I wasn't like everyone else. My mom says that I have a tendency of obsessing on certain subjects. Unfortunately, these subjects don't interest other kids my age and they really don't interest my teachers. In fact, my kindergarten teacher said she would scream if I mentioned snakes or lizards one more time while she was teaching the days of the week. I would get in trouble for not paying attention -- and the teasing began.

In third grade, my teacher informed me that I have Asperger's Syndrome. I said, "So what? Do you know that Godzilla's suit weighs 188 pounds?"

Later, I asked my mom, "What is Asperger's Syndrome? Am I gonna die?" She said that it's like having blinders on, and that I can only see one thing at a time, and that it's hard to focus on other things. Like I would tell anyone and everyone that would listen about Godzilla because my big obsession was, and still is, Godzilla -- not a real popular subject with the middle school crowd, and so the teasing continues.

I might be different because I have different interests than other teenagers, but that doesn't give them the right to be so mean and cruel to me. Kids at Oak Valley make fun of me for liking what I like the most.

People also make fun of me for knowing facts about volcanoes, whales, tornadoes and many other scientific things. My mom says that she has been able to answer many questions on Jeopardy! just by listening to what I have to say, but I've even been ridiculed for being smart.

Maybe someday I'll become a gene engineer and create the real Godzilla. I can dream, can't I?

Sometimes I wish I were like everyone else, but not really. Because I believe people should be respected for being different because we're all different in our own ways. This I believe.