Listen
'Tough Choices,' the Rise and Fall of Carly Fiorina 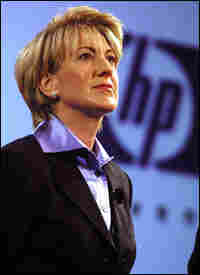 Carly Fiorina listens to a question during a press conference to announce Hewlett-Packard's merger with Compaq in September 2001. Scroll down to read an excerpt from her autobiography. Doug Kanter/AFP/Getty Images hide caption

In one of those acts of serendipity that the publishing industry loves, the current scandal over boardroom spying at Hewlett-Packard has erupted just as its former CEO Carly Fiorina has published her autobiography. The book, called Tough Choices, covers Fiorina's rise and fall as America's most powerful female executive.

Fiorina's selection as CEO of the technology company in 1999 was a milestone. Never before had a woman led such a big company. Fiorina says the press coverage took her aback.

"It sounds so naive, but the thing that frankly surprised me the most was how much attention people paid to the fact that I was a woman," she says. "I thought people would want to know about my objectives, what I thought my role was, where we were going, so that was a huge surprise, the woman CEO thing."

Fiorina's tenure included HP's controversial acquisition of Compaq. It followed a bruising, highly public fight with shareholders opposed to the plan, including Walter Hewlett, the son of one of the company's founders. In the press coverage, Fiorina was portrayed as a brash, publicity-seeking outsider with no respect for the company's values.

Fiorina was fired in 2005 after five and a half years on the job. She never got an explanation. Business Week computer editor Peter Burrows says that in the wake of the HP-Compaq merger, Hewlett-Packard had missed its earnings forecast and its share price was down.

Burrows, who wrote a book on Fiorina called Backfire, says Hewlett-Packard is now doing much better and the Compaq merger looks like a success. Burrows says Fiorina deserves some of the credit, but he says most of the people he talks to believe the rebound would never have happened if not for current CEO Mark Hurd.

HP's success has been overshadowed by the recent revelations that management had spied on board members and journalists. Among those whose records were searched was Fiorina. She says the whole scandal was sad and reflected a breakdown in judgment, perspective and ethics. 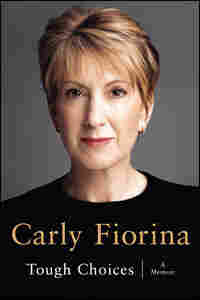 In this excerpt from Tough Choices: A Memoir, Carly Fiorina describes her 1999 debut at Hewlett-Packard, where she succeeded CEO Lew Platt.

Before I could start, however, I'd have to survive the first day. In retrospect, our preparation for the press onslaught was laughable, despite the outside experts we'd brought in. I knew every word Lew and I said on that Monday would be scrutinized by employees. We were embarking together on a long and difficult journey of change, and how we began would matter. The words I used to describe the company, my objectives, our challenges and our opportunities would stick. The organization would remember them, and I would have to live with them. As a new leader I wanted to speak to all employees about what we had in common, about what would pull us together. I wanted to talk about Hewlett-Packard-our respect for the legacy of this great enterprise, our desire to build a future together, a recognition that we were not as focused or fast or aggressive as we needed to be in this new Internet era.

I didn't want to talk about my gender or the glass ceiling-these topics were distractions from the mission at hand, and they separated me from the vast majority of my employees. And so I was unprepared and impatient with all of these questions. When I said, "The glass ceiling doesn't exist," it made headlines. I was trying to change the subject. I was trying to say that women could do anything men could do. I was trying to tell women that although there are plenty of obstacles and prejudices, there isn't some invisible barrier that prevents them from achieving their dreams. I was reflecting my own experience that more is achieved by focusing on the possibilities than by fixating on the limitations or the inequities. I didn't succeed in conveying any of this, and from the first day on, I could not escape the categorization of "Carly Fiorina, female CEO." Nor would I ever escape the relentless attention of the media.

I never wanted to draw attention to myself, but once it was focused on me, I wanted to deflect attention to the company. Whenever I agreed to an interview, I'd set ground rules: I won't talk about the glass ceiling, I won't talk about myself, I'll only talk about the company. Over the years that followed I turned down numerous requests from Glamour, People, Vogue, Diane Sawyer, Oprah Winfrey and more. These were great venues and personalities, but they weren't interested in the company; they were interested in me.

From my first until my last day at HP, I was criticized both for being in the press too much and for being unavailable to the press. From the first stories of my hiring until the last of my firing, both the language and the intensity of the coverage were different for me than for any other CEO. It was more personal, with much commentary about my personality and my physical appearance, my dress, my hair or my shoes. That first week, the editor of BusinessWeek came to see me with the beat reporter because they'd been working on a story for several months. Hewlett-Packard was going to be the cover story whether we liked it or not, and everyone recommended that I talk with them. Before we'd even sat down, the very first question from the editor was "Is that an Armani suit you're wearing?"

Vanity Fair, despite being warned numerous times that they were writing fiction about me, continued to report that I traveled constantly with a hairdresser and a makeup artist. There was a persistent rumor, bolstered by commentary in the local press, that I'd built a pink marble bathroom in my office. (I had actually moved into my predecessor's office and neither built nor bought anything for it.) There were no private bathrooms or even doors in executive offices. The CEOs of Lucent, Cisco, IBM, Dell, Sun Microsystems, Microsoft, Compaq, Oracle, GE, 3M, Dupont and so on all flew in corporate jets, and HP had owned them for thirty years. Nevertheless, my travel on a company plane was reported as evidence of my disrespect for the HP Way, my "regal" nature, my "distance" from employees.

I was alternatively described as "flashy" or "glamorous" or "diamond studded," which frequently was translated to mean a superficial "marketing" type.

Every speech I gave while I was the CEO -- and there were many, forty seven in 2004 alone -- was in response to a request from a customer or an employee of HP. I turned down far more than I accepted. Each of these speaking venues was a great opportunity to meet with, and influence, customers and to represent the capabilities of the company. Other CEOs were also always invited to speak, and yet my attendance was singled out as evidence that I "sought the limelight."

I was usually referred to by my first name. There was much, particularly painful commentary that I'd chosen not to have children because I was "too ambitious." People dismissed Frank's own career and contributions to our family and the community by inaccurately describing him as a "stay-at-home spouse."

In the chat rooms around Silicon Valley, from the time I arrived until long after I left HP, I was routinely referred to as either a "bimbo" or a "bitch" - too soft or too hard, and presumptuous, besides. Certainly, beyond my gender, I was not a typical Silicon Valley CEO. Where the archetypal leader was an introvert, I was an extrovert. Where the Valley loved to dress down, I loved to dress up. While Valley leaders talked about the bits and bytes of technology, I talked about the human impact of technology. I hadn't grown up in the Valley; I came from the East Coast and I'd grown up in big, brick-and-mortar, old-economy companies, not small, new-economy start-ups.

During the first few months of my tenure, Scott McNealy of Sun Microsystems decided to kick off his analyst meeting by making fun of me. Sun Microsystems was flying high in the late nineties and so was Scott, so everything he said and did received huge play in the media. He presented a skit featuring an actress with a blond wig and long, red fingernails standing in front of a garage. The garage collapsed on her head, to the great amusement of the assembled audience.

When I finally reached the top, after striving my entire career to be judged by results and accomplishments, the coverage of my gender, my appearance and the perceptions of my personality would vastly outweigh anything else. It disappoints me greatly. I have always believed that actions speak louder than words. Perhaps, in this new era of always-on, always connected information, where fact, fiction and opinion seem to carry equal weight, that's no longer true. It is undeniable that the words spoken and written about me made my life and my job infinitely more difficult.

Perhaps others' words define me more clearly in many minds than my own actions. Perhaps it is part of the reason I wrote this book.

In those first few days as a CEO I was sobered by the commentary of the media, the cool reception from the Valley, the skepticism of the executive team, and the passivity of the Board in this all-important transition. And I was buoyed by the employees of Hewlett-Packard. The first day alone I received hundreds upon hundreds of e-mail messages. Some asked about "e-services" because this had been recently announced as the company's Internet strategy. Some wondered what I thought about the HP Way. The vast majority expressed excitement about the opportunity for change. From that first day onward, I read all the e-mail messages that were sent to me, and answered a great many of them. My courage to do what was required always came from the employees. The company belongs to them-not to the Board, or the founders, or the families of the founders. The people of HP are HP. My job as CEO was to build new skills and capabilities, as well as new confidence and aspiration. I deeply believe that every person has more potential than they realize. I knew that HP had more potential than most people could see. My job was to lead the transformation of a once-great company that now was floundering by unlocking the potential of its people and its assets.

Over the years, I received tens of thousands of messages from employees, and thousands more when I left. I receive them to this day. In that entire time, only one was unsigned. The authors of all of the other e-mails, both those who were supportive and those who were critical, let me know who they were as well as what they thought. I am deeply grateful for the candor and wisdom of the people of HP. They are the guardians of its legacy and the builders of its future.

Reprinted from Tough Choices: A Memoir, by Carly Fiorina, by arrangement with Portfolio, a member of Penguin Group (USA) Inc. Copyright(c) Carly Fiorina, 2006. 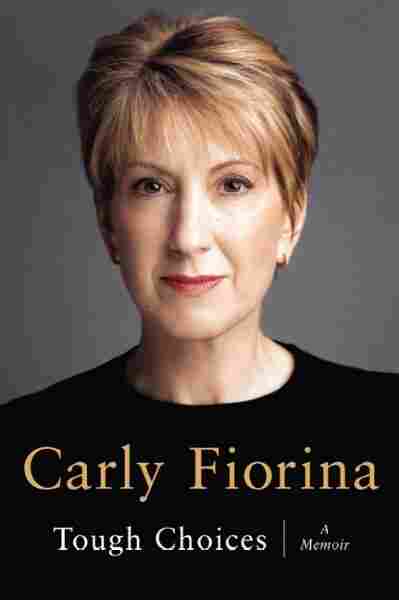