Accessibility links
'Infamous' Fails Where 'Capote' Succeeded Infamous tells the story of Truman Capote as he wrote In Cold Blood. If that sounds familiar, it's because a movie about the exact same thing came out a year ago, and it was a better film.

Infamous tells the story of Truman Capote as he wrote In Cold Blood. If that sounds familiar, it's because a movie about the exact same thing came out a year ago, and it was a better film. 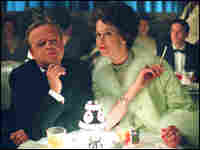 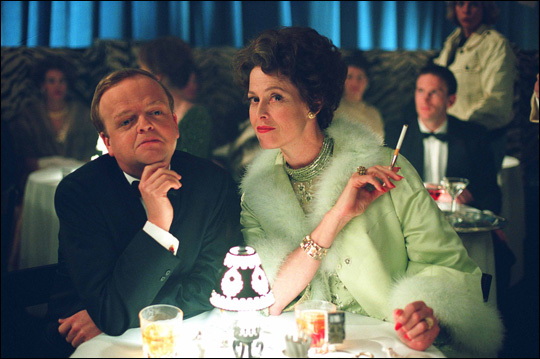 Now, one of the most celebrated films of last year's awards season was Capote, nominated for five Oscars and winner of Best Actor for Philip Seymour Hoffman. The new film Infamous is telling that story again.

KENNETH TURAN: Everyone knows comparisons are odious, but in the case of Infamous and Capote, they are also inevitable.

Both films cover exactly the same period in author Truman Capote's life. Infamous was held out of release for a year to put some distance between the two films. Even a year, however, isn't long enough to disguise the gap in quality between the two.

Capote not only did it first, it did it considerably better. Infamous, written and directed by Douglas McGrath, would be frustrating in almost all areas even if Capote had never been made. That failure is not due to lack of ambition. McGrath has tried a difficult maneuver, a change in tone that he himself describes as a shift from light to dark, from comic to tragic.

Unidentified Woman (Actress): (As character): What about Terry?

Mr. TOBY JONES (Actor): (As Truman Capote): It's Perry. As in Antoinette? He's an enigma. You know, before he killed the Cutter boy, he put a pillow under his head? I can't quite put my finger on it. It seems insane to say that he's tender, but he does have the tender and the terrible side by side inside him.

TURAN: The difficulty is that the first half of Infamous, which attempts to draw humor from Capote's flamboyant persona, is nowhere near as comic as McGrath intends. Instead, the picture's look at New York high society gives off a tone of arch stylization that plays as artificial and overwrought.

Neither the seriousness of the second half, nor the vivid performance by Daniel Craig as killer Perry Smith, can rescue or renew it. Part of the problem is the casting of elfin British actor Toby Jones as Capote. The actor looks like the writer to a remarkable extent. But the resemblance seems to have encouraged Jones to fall back into a kind of weird impersonation that verges on caricature. It also makes a hash of Capote's legendary ability to charm one and all.

The only section where Infamous achieves the gravitas it is after is in it's portrayal of Perry Smith, the killer Capote formed an emotional attachment to. As played by Daniel Craig, slated to be the next James Bond, Smith comes across as a chilling, dark force. His interactions with Capote have a more dangerous edge than they did in the previous film.

Mr. JONES: (As Capote) Perry, I never judge my characters.

Mr. DANIEL CRAIG (Actor): (As Perry Smith) Well, here's something for you to remember, all one hundred percent of: I am not a character. I'm a human being.

TURAN: Craig's work is strong. But without the appropriate foundation to build on, it can't rescue the film. When one character says about Capote's book on the murders that the writing lacked kindness, it's something that could be said, to its loss, about this film as well.