Accessibility links
The Economic Fruits of a 'Microcredit' Laureate For years, Nobel Peace Prize winner Mohammad Yunus has helped the poor people of Bangladesh by giving them "microcredit" to start businesses. One such enterprise is a cell phone company that provides service and equipment to 260,000 village "phone ladies" across the nation.

Listen
The Economic Fruits of a 'Microcredit' Laureate

For years, Nobel Peace Prize winner Mohammad Yunus has helped the poor people of Bangladesh by giving them "microcredit" to start businesses. One such enterprise is a cell phone service that provides service and equipment to 260,000 village "phone ladies" across the nation.

Yamin Bakht, the general manager of Grameen Phone, talks with Alex Chadwick about Yunus' key role in creating the service. 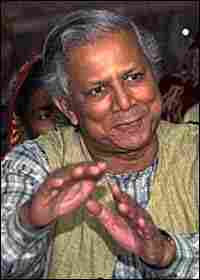 Microfinance, sometimes called "banking for the poor" usually means providing poor families with very small loans to help them start and grow businesses. The loans are typically less than 200 US dollars. Very poor people use these small loans along with support from local organizations called microfinance institutions. Grameen Bank of Bangladesh is an example of an MFI. Click to learn more.

Listen to Yunus in a 1993 NPR interview.

Yunus on how banking created class of untouchables; credit should be a human right

Yunus on poverty not created by poor people

Bangladeshi economist Muhammad Yunus and his Grameen Bank are awarded the Nobel Peace Prize for their pioneering use of microcredit -- tiny loans -- to spur development among the poor. Bangladesh is a poverty-stricken nation of about 141 million people. The Grameen microcredit model has been exported to poor nations around the world.

Through Yunus's efforts and those of the bank he founded, poor people around the world, especially women, have been able to buy cows, a few chickens or the cell phone they desperately needed to get ahead.

The 65-year-old economist said he would use part of his share of the $1.4 million award money to create a company to make low-cost, high-nutrition food for the poor. The rest would go toward setting up an eye hospital for the poor in Bangladesh, he said.

The food company, to be known as Social Business Enterprise, will sell food for a nominal price, he said.

"Lasting peace cannot be achieved unless large population groups find ways in which to break out of poverty," the Nobel Committee said in its citation. "Microcredit is one such means. Development from below also serves to advance democracy and human rights."

Yunus is the first Nobel Prize winner from Bangladesh, a poverty-stricken nation of about 141 million people located on the Bay on Bengal.

"I am so, so happy, it's really a great news for the whole nation," Yunus told The Associated Press shortly after the prize was announced. He was reached by telephone at his home in the Bangladeshi capital Dhaka.

Grameen Bank was the first lender to hand out microcredit, giving very small loans to poor Bangladeshis who did not qualify for loans from conventional banks. No collateral is needed and repayment is based on an honor system.

Anyone can qualify for a loan - the average is about $200 - but recipients are put in groups of five. Once two members of the group have borrowed money, the other three must wait for the funds to be repaid before they get a loan.

Grameen, which means rural in the Bengali language, says the method encourages social responsibility. The results are hard to argue with - the bank says it has a 99 percent repayment rate.

Since Yunus gave out his first loans in 1974, microcredit schemes have spread throughout the developing world and are now considered a key to alleviating poverty and spurring development.

The Associated Press contributed material to this report.