Accessibility links
Pianist's Passions Span Music, America and Wolves French-born Helene Grimaud is busy this season. She has a new CD, Reflection, and her autobiography, Wild Harmonies, has been published in English. The works explore the pianist's different loves, in both her musical and personal life. 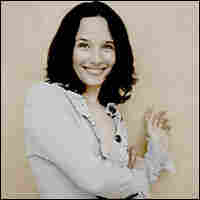 Pianist Helene Grimaud is busy this season. Her autobiography, Wild Harmonies, has been published in English, and she has a new CD out, Reflection. Kasskara/Deutsche Grammaphon hide caption

Robert Siegel shares his thoughts on Helene Grimaud in his column, From the Archives, where you can also hear his previous interviews with the pianist.

French-born musician Helene Grimaud describes playing the piano as a "reconciliation of opposites."

"You're both absent and incredibly aware at the same time," she says.

On her latest CD, Reflection, Grimaud explores the works of the composers Robert Schumann, his wife Clara, and Johannes Brahms. It's a thematic, organized work that looks at the love and inspiration the three composers shared.

At the same time, Grimaud's autobiography, Wild Harmonies, has been published in English. In the book, she examines two of her great loves: America and wolves.

The 36-year-old pianist says her connection to the United States, where she arrived at age 21 and now lives, is instinctive and powerful. And she describes how meeting a she-wolf named Alawa in Tallahassee, Fla., changed her life — and helped persuade her to found a wolf conservation center in New York. 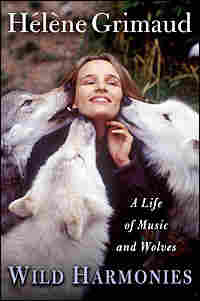 The night was as black as pitch.

Jeff was away. I couldn't sleep, so I had thrown myself into working on a score. Harvey whined and scratched at the back door to go out. She had become quite used to our walks and considered them to be her due. I looked at my watch. It was two o'clock in the morning. Oh well, why not? I closed my book, and the two of us took off at a brisk pace, heading north. Like a yo-yo, my shadow stretched far out in front of me and then shrank, in rhythm with the yellow haloed streetlights. Everything in the neighborhood was asleep at that hour -- people, cars, and dreams. Except for a few night birds and the far-off passing of a car, rushing to get back to home sweet home, no sound broke the general slumber, which was so complete as to seem narcotic.

I particularly liked walking in the middle of the night at a brisk pace, feeling my muscles ache and my hips swing, tracing in that movement invisible arabesques in the air. Often I imagined that I was going to keep going straight, taking long strides, without ever turning back, and without ever breaking the rhythm of my walk and its military tempo. I could walk for a long time, until I anesthetized the incredibly mechanical machine of my body, with its ferocious vitality. This had begun as a child, when I would hurt my hands. As an adult, I liked inflicting other ordeals on myself, like running, or climbing stairs as fast as I could while holding my breath. In hotels where I stayed when I was giving concerts, I would escape into lifting weights, running on treadmills, and trying out all those magnificent bodybuilding machines, on which I would exercise until my head swam. Transcending fatigue allowed me to access another level of movement, the level of thought, and then of music through rhythm, through tempo.

That night, while walking, I remember that I was thinking about The Night of the Hunter, the film directed by Charles Laughton, which I had rented several times in Paris while I was learning English. I had been astounded by the beauty of the scenes that show the two orphans drifting in their boat down the Mississippi. Do you remember the images of that troubling and mysterious night? Of all of the world's innocence wrapped up in the sleep of those children whose fate is in the hands of the river? And destiny in the shape of that immense, unpredictable river with its shifting islands, which I had a hard time imagining flowed only a few hundred miles from my new home. I liked the fact that, like Ulysses in his boat, Moses in his basket, and Romulus and Remus on the Tiber, Charles Laughton had decided to create his own founding myth, and that he had done so with film, the quintessentially American way of storytelling. The captainless ship slides between the two banks, where nature has posted its watchful animals -- both victims and predators -- on the lookout.

While walking, Harvey at my heels, I pictured the iguana, the owl, the spider, and the fox, all of those scenes in the film that I had particularly loved. I had the sensation that, now that I was in the uninhabited part of the neighborhood, the iguanas, owls, insects, and foxes on either side of the road were watching me pass by.

And it was at that instant that I saw it for the very first time.

The silhouette of a dog, but -- with one glance, and despite the dark -- one could instantly tell that it was not a dog. The animal had an indescribable walk -- tense, furtive, as if it was making its way through a tunnel that was barely large enough. Its eyes had an almost supernatural glow. They gave off a muted light, violet and wild. Strangely, each step it took extinguished the sounds around it: no more night birds, no more slithering or rustling of wings, just a thick, tense silence. The creature looked at me, and a shiver ran through me -- neither fear nor anxiety, just a shiver.

About twenty yards behind the animal, a tall man appeared in turn. Harvey gave off a little whimper and slipped off into the undergrowth, where she lay down. Alerted by the behavior of my dog, I froze.

"You often go out walking at this hour?"

The voice was harmonious, with a curious intonation that was devoid of both warmth and animosity. Despite the fact that I was alone in this deserted place at that hour, and despite the strangeness of the encounter, I did not feel as though I was in danger.

I answered in my very direct way, straight and to the point: "I'm a musician, a pianist, and sometimes I work late at night."

To tell the truth, it wasn't the man who intrigued me, it was his dog. In the dark, the animal looked strangely like Harvey. But it was radically different, not because of its shape, but rather because of its behavior. It kept its distance, somewhat apart. I had barely finished speaking when it approached me with an airy suppleness. It came up to sniff me, then immediately retreated.

The stranger introduced himself. His name was Dennis. He loved classical music and owned a lot of records. I could come over when I liked. I found the approach a little direct, and I was amused at the idea of all the ploys a man is capable of to get a woman to come home with him. With a jerk of a thumb over his shoulder, he pointed out where he lived, and all at once I understood that this was the "cobra man." But what about the animal?

"It's a she-wolf," Dennis explained, before I could even ask the question.

At the same moment, she came toward me again. I didn't put out my hand.

I didn't budge, as if she wasn't there. Harvey stayed put, flattened to the ground. Dennis continued to talk, but I began to feel less at ease. My neighbors' warnings had done the trick: I remained on my guard. Musician? Thousands of records? Indeed, all he talked about was music. My doubts subsided when he mentioned a certain version of a work by Liszt played by Claudio Arrau, and Brahms's Third Symphony conducted by Karajan.

Let's see ...Was he carrying the weapons that he supposedly owned? I examined his silhouette in the darkness. It was impossible to make out anything at all, except that he was about fifty and was very tall and thin. Occasionally, the lenses in his glasses shot little splinters of light into the night.

And then the she-wolf moved.

Slowly she approached me. My arms hung by my side. She came up to my left hand and sniffed it. I merely stretched out my fingers, and all by herself, she slid her head and then her shoulders under my palm. I felt a shooting spark, a shock, which ran through my entire body. The single point of contact radiated throughout my arm and chest, and filled me with gentleness. Only gentleness? Yes, but a most compelling gentleness, which awakened in me a mysterious singing, the call of an unknown, primeval force. At the same moment, the wolf seemed to soften, and she lay down on her side. She offered me her belly.

The minute she touched my hand, Dennis stopped talking. He stared at the wolf. He seemed dumbstruck. When she lay on her side, he murmured: "I've never seen her do that."

"Lie down like that. It's incredible for a wolf to do that, it's a sign of recognition and trust, even a sign of submission. Wolves have a real phobia of humans. They never lay themselves open like that if they don't feel safe. Even with me, she's never acted like that."

The wolf stayed at my feet. I had to struggle against a powerful urge to rub my face against her muzzle, to caress her and run with her into the night.

"How should I respond?"

I feared making a clumsy gesture, destroying with one inept movement this tacit, incredible, and unusual alliance that the wolf had made with me.

"Why don't you come pay her a visit, tomorrow or some other day? She's called Alawa."

I think that my happy smile could have lit up the night.