Accessibility links
The 'Fabulous Lunts,' Alive at Ten Chimneys The Wisconsin hideaway of the late Broadway icons Alfred Lunt and Lynn Fontanne, opened to the public in 2003. Many of today's visitors to their home don't know much about the couple, but the home offers a "diary" of their lives. 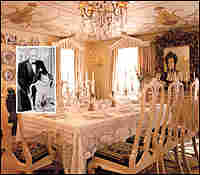 With the dining room restored at Ten Chimneys, it's as if the fabulous Lunts were still in residence. Ten Chimneys Foundation hide caption 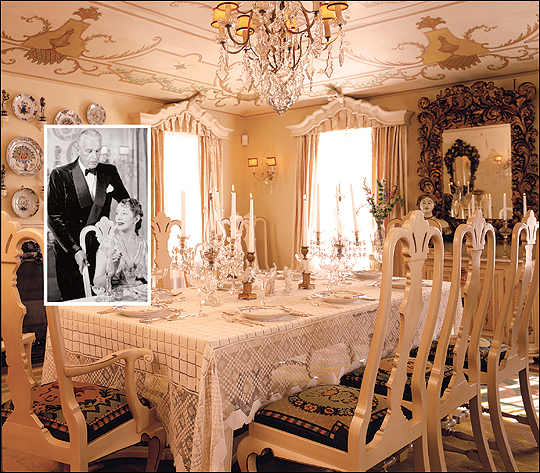 With the dining room restored at Ten Chimneys, it's as if the fabulous Lunts were still in residence. 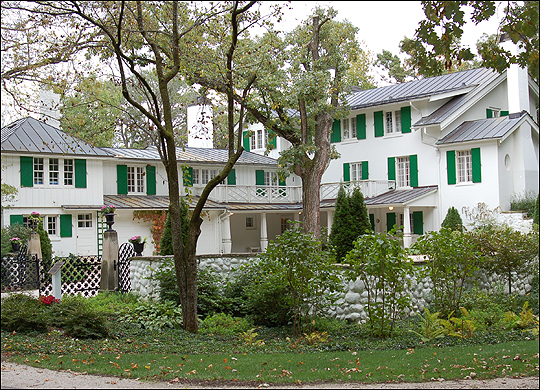 The Lunts added rooms to Ten Chimneys, bit by bit. The different levels add a sense of drama. 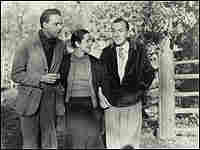 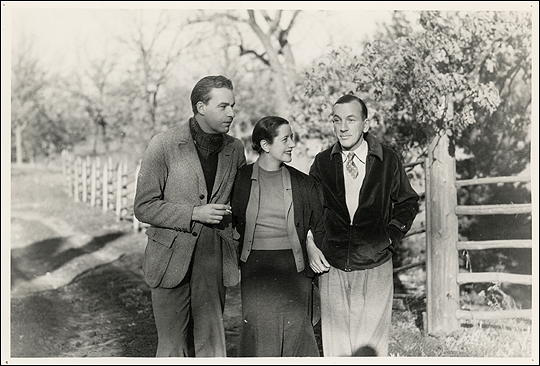 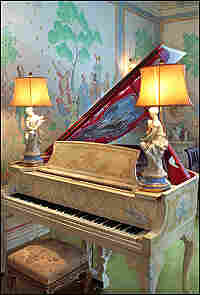 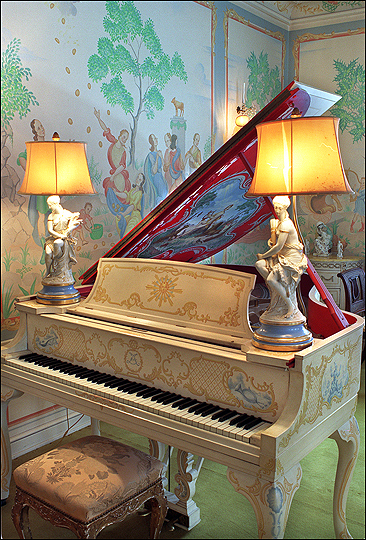 This once black Steinway became known as Noel Coward’s piano. 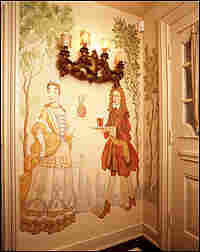 The home is a testament to the Lunts' need for theater. On the entryway halls, painted lords and ladies offer the traveler refreshments. Zane Williams Photographs hide caption 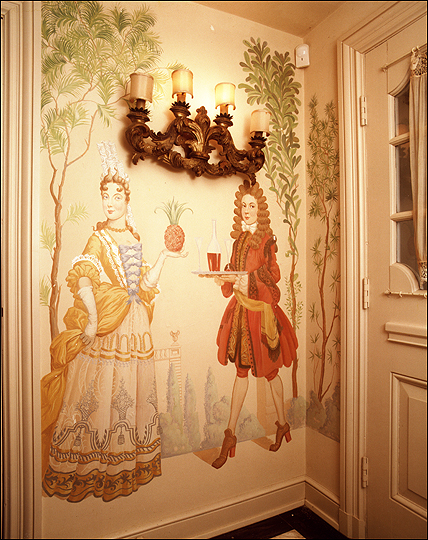 The home is a testament to the Lunts' need for theater. On the entryway halls, painted lords and ladies offer the traveler refreshments.

In the drawing room, biblical murals enliven each wall. The murals in the house were painted by set designer Claggett Wilson, who came for a month and stayed two years. Ten Chimneys Foundation hide caption 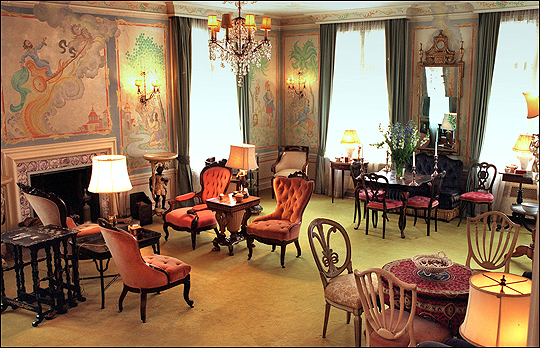 In the drawing room, biblical murals enliven each wall. The murals in the house were painted by set designer Claggett Wilson, who came for a month and stayed two years. 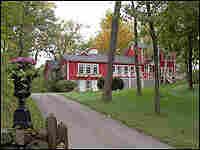 A bright red cottage is on the grounds of Ten Chimneys. Kate Davidson, NPR hide caption 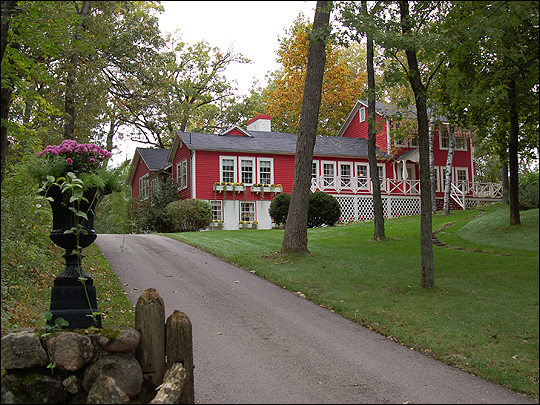 A bright red cottage is on the grounds of Ten Chimneys. 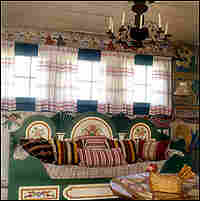 Bright colors were a hallmark of Ten Chimneys, from its green shutters to its brightly painted murals... and extending to the cottage, where this couch resides. Kate Roth Photography hide caption 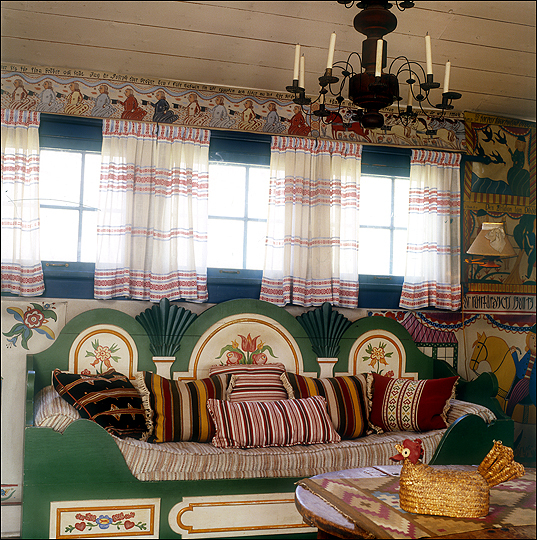 Bright colors were a hallmark of Ten Chimneys, from its green shutters to its brightly painted murals... and extending to the cottage, where this couch resides.

The host enjoyed cooking, and a specialty were Swedish-style cardamom bread and coffee. A Wisconsin chef recreates Lunt's treat.

When I was growing up in rural Wisconsin, there was a story that an old British actress -- once famous on Broadway -- was living alone out in the woods less than 10 miles away after the death of her actor husband.

It was a romantic picture.

"Who was she?" I asked my mother. "Lynn Fontanne," she said.

Lynn Fontanne. Her husband was Alfred Lunt. For four decades, from the early '20s to 1960, they were the king and queen of the American stage. Critics called them "the Fabulous Lunts," the "Magical Lunts," the "Lustrous Lunts" and the "Incomparable Lunts."

Laurence Olivier called them the "celestials" and the "glorius beloved supremes." Olivier said that at his very best, he was only imitating Alfred Lunt. Helen Hayes said that of all the lucky things that had happened to her in the theater, meeting the Lunts was the luckiest.

But with their deaths -- first Alfred in 1977 and then Lynn in 1983 -- the Lunts seemed to vanish into mist of legend. They were stars of the darkened stage, not the lasting icons of celluloid.

The Lunts made one -- and only one -- true Hollywood film. The Guardsman is a delightful tale of romantic deception. Alfred Lunt plays a Shakespearean actor who tests his wife's fidelity by wooing her in the guise of a Russian guard.

These were roles the Lunts had already played to great acclaim on stage: witty, sexy, elegant. But the Lunts never again bothered with Hollywood. "We can be bought," they reputedly said, "But we can't be bored."

They could, however, search for a respite from the bright lights of Broadway. And they found it at Ten Chimneys, the home Lunt built almost room by room in Genesee Depot in southeastern Wisconsin, where he grew up.

The citizens of Genesee Depot gave the Lunts and their friends privacy and stability. And oh, the friends who came: writer Edna Ferber, critic Alexander Woollcott, Olivier and Hayes, Katharine Hepburn. And Noel Coward, the playwright and songwriter who was their closest friend.

As a 12-year-old paperboy, Martin Dable walked half a mile off the main road to deliver the news to Ten Chimneys.

Ten Chimneys is like a very large elves' cottage, a white nook-and-cranny house. Lunt drew on his family's Scandinavian background in designing the house. There are Swedish chimneys and fireplaces, and color everywhere. Green shutters adorn each window.

"Jules Johnson would meet me at his door, take me to his apartment, up to the kitchen and oh my goodness, I'm going to be taken to the drawing room," he says. "And this magnificent drawing room with Alfred and Lynn setting in one of the two old chairs from Wisconsin Avenue. And Noel Coward was there, at one time."

Tom Snyder, of Oconomowoc, Wisc., also got a glimpse. So did Karen Rosecky, who lived down the road.

"We're all starbound," Snyder says, "And they were the stars that we could touch and see."

"We had a party line [on the telephone]," Rosecky says, "We always knew who was coming. We'd see Helen Hayes at church. We'd go to the grocery store, I'd see [film actor] Van Johnson. And he did have the proverbial red socks on."

Rosecky grew up in Genessee Depot. One day, she rode on horseback to fetch her brother, who was working at Ten Chimneys, when she saw a tall, handsome woman with a British accent.

"And I saw this woman, turned out to be Lynn," Rosecky says. "And she said, you have pretty, shiny hair. And I said to her, 'We go to church and every Saturday night we get our hair washed. My oldest sister puts vinegar in.' And I said, 'She always says it shines.' And today, in thinking back, I wonder -- Lynn became known as the 'Fontanne of Youth' -- that maybe that was a trick that would have caught her eye."

Dable is now a docent at Ten Chimneys, which opened to the public in 2003 as a museum.

For 20 years after the passing of Lynn Fontanne, Ten Chimneys sat in jeopardy, nearly falling to a wrecking ball. Then Joseph Garton, Madison-area restaurant owner, bought it, imploring people who cherished Ten Chimneys to save it. Out of that grew Ten Chimneys Foundation and a loving restoration that cost nearly $7 million.

Now, once again, the property looks as if Alfred Lunt and Lynn Fontanne were just upstairs changing into evening clothes.

Yet Ten Chimneys may be as much about reviving memories of the Lunts as it is preserving them. Sean Malone, president of Ten Chimneys Foundation, says three-quarters of the visitors to the home have never heard of its former occupants.

Their impact on the stage is undeniable. They broke new theatrical ground. With a slump of his shoulders, Alfred proved that an actor could turn his back to an audience, and still express his character.

Lunt and Fontanne perfected a quick back-and-forth speaking style that was both witty and natural.

The stage actors who came before them spoke differently. Their friend and colleague Carol Channing explains:

"[Actors] used to have great stentorian tones," she says. "Great, wonderful Shakespearean actors! And they each waited for one another to finish the sentence completely... and it was so phony!"

The Lunts were rapid-fire.

"It broke a whole barrier of theater that doesn't sound like normal conversation," Channing says. "And they made it sound absolutely normal."

They made a point of supporting living playwrights. Everyone wanted to write for them: Robert Sherwood, S.N. Berhman, Pearl Buck, Edna Ferber, Maxwell Anderson.

And of course, Noel Coward.

Coward, like Fontanne, was English. He'd known Lynn a bit in their adolescence, and met her again in New York before she and Alfred were married. It was love at first sight for all three of them, and it never ended. They had a pact.

"All three of them would become the biggest stars in theater," Malone says. "And then once all of them had reached that pinnacle to have their own following, then Noel would write a play for the three of them to star in and they would, as I believe Noel Coward put it, create a new theatrical cosmos."

The play he wrote was called, aptly, Design for Living, written in 1932. It stars lovers Otto and Gilda and their best friend Leo, with whom they form a tormented love triangle.

But 1932 was a long time ago. And if Alfred Lunt and Lynn Fontanne have been in some way forgotten, perhaps the restoration of their home will bring them back to life.

"I think that Ten Chimneys is like a diary," Malone says. "It's as personal as a diary. And when you look around, you do know who they were." Not just extraordinary artists but "extraordinary people," he says.

The radio version of this story was produced by Kate Davidson and recorded by Johnny Vince Evans.