Accessibility links
Bargain-Hunting in San Diego's Real-Estate Slump After more than doubling in five years, home prices in San Diego have hit the brakes, and sales have slumped. But a few brave buyers see the chance for bargains as sellers grow more distressed. 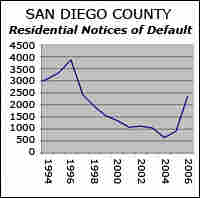 Notices of default to San Diego County homeowners rose sharply over the last year, though they are still below the peak levels of the 1990s real-estate slump. A property is considered to be in default when the owner has failed to make a mortgage payment. It's a step leading to foreclosure. Source: Dataquick Information Systems hide caption

The real-estate party in San Diego is so over. The big question now is how bad the hangover will be.

After more than doubling in five years, home prices in San Diego have hit the brakes. And analysts are watching the market closely for signs of what other cities may have in store.

While some are forecasting tough times ahead, a few brave buyers see opportunity.

A new kind of real-estate sign has been popping up on telephone poles around San Diego. The lettering on the cardboard is plain -- and so is the message: DumpingHomes.com. Curious customers who checked out the Web site last week would have seen an ad for a four-bedroom, four-bath home that was auctioned off over the weekend by Bill Shepner, a.k.a. "William the Liquidator."

Shepner says the house was on the market for about a year. He says the frustrated sellers just didn't want to wait any longer for a buyer to show up.

Depreciation is an unwelcome newcomer in San Diego, where for years, home prices were climbing at a double-digit pace. Not any more. Last month, the average sales price was about4.5 percent lower than it was a year ago. And the number of homes sold plunged by 35 percent.

At a recent condominium auction he hosted, Shepner says that not many bidders showed up, and the unit went for $50,000 less than he thought it would. He says many sellers are reluctant to discount prices that far, because they've borrowed heavily against their homes while prices were going up.

"If you're looking for the next foreclosure, follow the Hummer," Shepner says. "A lot of these Hummers were paid for out of equity lines and refinances -- and the Lexuses and the Mercedes. Maybe I'm being too cynical, but we'll see what happens."

More Loan Than Homeowners Can Handle

Others homeowners never really had any equity to begin with. Aggressive lenders made it possible for many families to buy into the pricey San Diego market with little or no money down and low, introductory interest rates. When the monthly payments increase, some of those families can't afford them. And with home prices now flat or dropping, it's getting harder to sell and walk away.

"Their income maybe was never enough to afford the loans, and their adjustable-rate mortgages are kicking in, and there's going to be some blood flowing in the streets," Shepner says.

The smell of blood already has some would-be sharks circling.

On a recent Tuesday night, a half-dozen aspiring real-estate moguls sat in a classroom at an adult education center. They'd paid $55 apiece to hear from Gene Burns, co-author of the real estate buying guide 52 Homes in 52 Weeks.

The students dutifully scribble in their notebooks, as Burns, who lives in Las Vegas, tells how to scout for distressed homeowners or their lenders, who might be willing to unload houses on the cheap.

In an interview, Burns said the time for buying is almost ripe. More than 2,300 San Diego households defaulted on their mortgages in the last three months. That's the highest number of defaults in more than eight years.

A Long Slump Ahead?

"Right now, I have maps on the wall of the entire coast of San Diego, areas that I want to invest in," Burns says. "And in a market like this, you can negotiate very, very well."

Burns knows what it's like to be on the other end of a down market. He lost his own home in California during the last real-estate downturn, in the early 1990s. He's convinced this market will rebound, just as it did then, and that patient investors will be rewarded.

Waiting out the downturn could take deep pockets, though. While Burns expects the San Diego market will bottom out next year, other forecasters see a longer slump.

One of Burns' neophyte students asks the question that's keeping many people on the sidelines: "How do we know that, if we buy now, it won't drop even lower?"