Accessibility links
Black Actors in Love Scenes: No Need to Apply Commentator and science-fiction author Steven Barnes has noticed a disturbing trend in Hollywood films: There are no black men in love scenes in big blockbuster movies.

Listen
Black Actors in Love Scenes: No Need to Apply 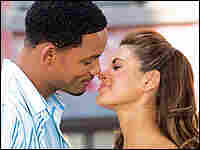 Will Smith can kiss Eva Mendes in his popular film Hitch -- but that's all the action you'll see. Columbia Pictures hide caption

If you go to IMDB.com, the Internet Movie Data Base, you'll find a disturbing statistical blip. Of the roughly 350 films that have earned more than $100 million, about 50 of them have love scenes. You know the drill: Boy kisses girl, they sink together onto a bed, more kissing and touching, fade to black.

From PG through R, from Bond through Basic Instinct, you'll find such scenes in about 15 percent of the most popular films ever made. And every single one features a white guy.

If you scan the same list for American films with non-white leads (again, there are about 50), you'll find love scenes in zero percent. That's right, zero. No blacks. No Latinos. No Asians. Hollywood makes such films; you can find them further down on the list. But America won't watch them.

About 15 years ago, I sat in a movie theater in Westwood, Calif., watching the trailer for the new Spike Lee movie Mo Better Blues. A slow, sensuous love scene began between Denzel Washington and a black woman.

Instead of watching the screen, I turned around and examined the audience. All of the other moviegoers were white, and I saw something fascinating: All of the women in the theater leaned forward, toward the screen. All of the men pressed away, back in their seats as if utterly repulsed.

In the late 1970s, I saw a science-fiction movie called Damnation Alley. In it, George Peppard, Jan-Michael Vincent and Paul Winfield travel across an atomic wasteland in a nuclear-powered Winnebago.

They approach the ruins of a shattered city, and out walks the last woman in the world. And she's white. I leaned across to my buddy and said, "They're going to kill Paul Winfield."

Startled, he asked, "Why would you say that?"

My friend looked at me with pity. "You are too young to be so cynical," he said.

I'm convinced that the problem is not just "Hollywood executives." They're no better or worse than the rest of us. They simply try to keep track of what the audience wants and rejects, as measured by box office receipts.

And I don't believe there's something especially twisted or limited about the white majority. I think this little statistical blip has to do with human perception itself -- and most specifically, male territorial behavior.

When confronted with this statistic, some people ask why I don't count movies such as Will Smith's delightful Hitch. Simple: There are no love scenes. Hugs and kisses don't make babies. I suspect that it's the depiction of specific reproductive behavior, even at a genteel When Harry Met Sally level, that triggers the most powerful negative response, especially in male alpha-warrior types.

Whose antipathy, by the way, doesn't necessarily extend to the females of said out-group. After all, America loves watching Halle Berry or Lucy Liu get busy -- as long as it's with Pierce Brosnan, Billy Bob Thornton or Josh Hartnett. You won't see Denzel Washington or Jackie Chan dropping trou onscreen anytime soon.

The only Latino to crack the coveted $100-million mark, Antonio Banderas, did it in a family film, Spy Kids 2.

Unless you're white, you aren't doing the nasty: Not with a black woman, not with an Asian women, not with anyone -- unless you want your movie to bomb.

Once upon a time, non-white males had a hard time surviving action movies. Now, they can survive and even succeed, as long as they stay clothed. Brad Pitt can have saucy love scenes with Angelina Jolie and still earn almost $200 million.

But when they remake Shaft for a wide audience, poor "sex machine" Sam Jackson gets only one kiss in the entire film, upright and clothed. Of course, that's better than Morgan Freeman, who has had only one screen kiss in his entire career.

But I suppose I should be grateful, should consider the black male's cinematic promotion from corpse to eunuch to represent progress. In the long run, some say, the passage of time, and the cultural and genetic intermingling of the American melting pot are more likely to cure these ills than any amount of activism or finger-pointing.

It is difficult for us to change our basic natures, or the social programming established in childhood -- especially if one was born before the civil rights movements of the 1950s and '60s.

I can live with that. In fact, my guess is that this issue will have resolved itself by the time, say, 75 percent of the white males born before 1950 have gone to that great multiplex in the sky.

And personally? I think it's worth the wait.

Steven Barnes is a science-fiction novelist, screenwriter and blogger based in Covina, Calif. His 20th novel, Great Sky Woman, is published by Random House/One World.