Accessibility links
A Jazz Genius Goofs Off Art Tatum was such a towering figure that it's easy to wonder whether he did things differently when he was off-duty and out of the spotlight. What did he sound like playing a private party or an after-hours club, that jazzman's preferred hangout, in the company of friends?

A Jazz Genius Goofs Off

A Jazz Genius Goofs Off 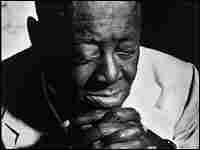 Should this casual, after-hours material be examined under the same microscope as the recordings Art Tatum made for release?

Georgia on My Mind 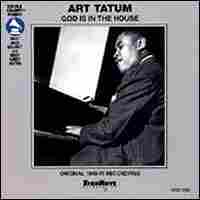 Recording: God Is in the House

Like many jazz musicians of his era, Art Tatum understood the entertainment aspects of his art. Though he didn't gussy up his music, he knew how to keep people engrossed all the same: A master of stride and boogie and bebop, he'd string his listeners along just by dancing around the theme, and then at just the right moment, he'd lower the boom, delivering a line so dazzlingly improbable that the common response was a gasp.

Tatum was such a towering figure that it's easy to wonder whether he did things differently when he was off-duty and out of the spotlight. What did he sound like playing a private party or an after-hours club, that jazzman's preferred hangout, in the company of friends? This CD, best considered a vital companion to Piano Starts Here and other well-known titles, offers a clue: God Is in the House was recorded in 1940 and '41 by Jerry Newman, a student at Columbia University who was obsessed with Tatum and would follow him around, recording whatever he could. Newman's presence came at a key time: Though there are recordings of Tatum in private later, this is one of the few known documents from the early '40s, when the piano titan was at the peak of his powers.

To hear that peak, listen to the Tatum standby "Sweet Lorraine" (audio), which builds, one chorus at a time, into one of his most magically relaxed solos. That track and several others were recorded at a place called Reuben's (on 130th St. in Harlem), a small club frequented by piano players; the proprietor, Reuben Harris, liked to accompany his guests by playing two whiskbrooms on a sheet of newspaper. He's audible here, though not enough of a virtuoso to make one wistful for those long-lost whiskbroom days of jazz.

Another piece Tatum played frequently was the romantic standard "Body and Soul" (audio), and this version finds him determined to get away from his usual approaches. He plays in smaller, less showy phrases, jettisoning the flashy stuff in favor of whimsical inside jokes and odd blues rejoinders, quips that probably made sense to those sitting near him. These are worth hearing as the sound of a genius goofing off, and going to great lengths to avoid repeating himself.

Album
God Is in the House
Artist
Art Tatum