Accessibility links
Baghdad Poets Find an Oasis from Violence A tent decked out with ceiling fans and a sound system offers poets and their audience a brief respite from Baghdad's violence. Shiites and Sunnis gather to express their feelings in verse during this event, which is organized by a Kurdish woman. 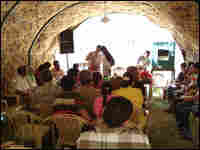 Sunnis from Madaan sit on the right and Shiites from Sadr City on the left during a poetry reading in the "Freedom Space" tent in Baghdad. Isra al Rubei'i hide caption 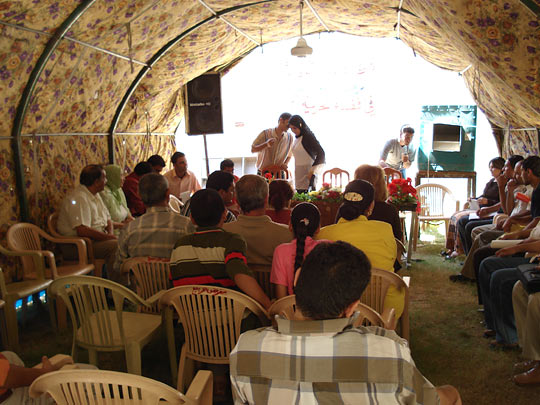 Sunnis from Madaan sit on the right and Shiites from Sadr City on the left during a poetry reading in the "Freedom Space" tent in Baghdad. 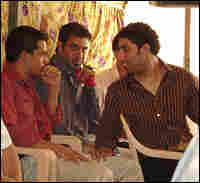 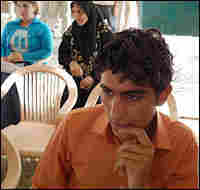 Freedom, like security, is elusive in Iraq, where people are terrorized by Sunni insurgents, Shiite militias and common criminals. Freedom to maneuver has shrunk; most people barely feel safe in their own homes, let alone in their neighborhoods. But in Baghdad, freedom can also be a frame of mind.

Barbed wire, cement walls and sandbags delineate the byways of the capital.

But for a brief moment, builders erect a temple for writers -- a tent decked out with ceiling fans, plastic flowers and a sound system.

"We can never find beauty in this ugly reality, but for a moment we can write about the beloved, the friend, the brother, to escape from this reality," says Hussein al Lami, 21, a poet who has a rare chance to perform in public.

A Shiite from the slums of Sadr City, where he lives in two cramped rooms with several other family members, Hussein writes about a homeland that is on the verge of disintegrating. His poetry is at once a eulogy for Iraq, and a call for its salvation:

Peace for you, oh land of civilization, our vow is to you and will forever be, till the last breath.

Hussein's poetry is laced with grief.

"Even if we want to write love poems, we would be fooling ourselves, because sadness haunts everything," he says.

Another poet, Sadiq Hattab, finds consolation in his imagination:

To escape from this troubled reality, the reality of explosions, if only for a few hours.

This evening was organized by the women's Freedom in Iraq group. They call this event "Freedom Space." Organizer Yanar Muhammad, a Kurdish women's rights activist, says the goal of the event is to bring Shiites from Sadr City together with Sunnis from Madaan, a violent neighborhood in south Baghdad. The two teams sit opposite each other, and take turns reading their poems.

Yanar is the mistress of ceremonies.

"Does this problem of sectarian division really exist in Iraq?" she asks. "Do we hate one another on this basis? We have invited poets to open up their hearts. What we see is absolute love and an aspiration for freedom."