Accessibility links
'Future Home' Adds Ease to Living for Everyone Dave Ward has turned his 1855 house into a model of "universal design." His so-called "Future Home" is made with technology and products that are easy to use for anybody, including quadriplegics, like Ward, or the elderly.

Listen
'Future Home' Adds Ease to Living for Everyone 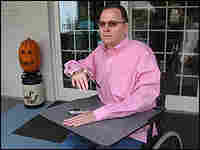 Dave Ward sits on the porch outside his Phoenix, Md., "Future Home." Ward has remodeled the 1855 house into a showcase of technology and products that can make a home easy to use for anybody. Joseph Shapiro, NPR hide caption

The principles of universal design call for safe, user-friendly products that everyone can use, to avoid stigmatizing or segregating those who need them. The goal is to allow your family and friends to enjoy your home for years to come.

Scroll down to read about seven practical steps you can take to make your home user-friendly.

Dave Ward is the resident curator of the place he calls the Future Home, a house that he has turned into a model of "universal design." It's the idea that where we live -- and the technology and products we use -- should be designed so they are easy to use for anybody, including a quadriplegic, like Ward or an elderly person who's frail or has cognitive disabilities.

The Future Home is in the middle of a state park in Phoenix, Md., about an hour north of Baltimore. The house is historic, but it mixes the old with the futuristic.

"This house was first built in 1855," Ward explains, "It was built as a tavern and inn, and it served the horse and buggy trade that traveled from Baltimore to Harrisburg, Pa."

Back then, this big, white building was known as Smith's Tavern. It's right up against the old toll road. Today, on the long wraparound porch, the music of the wind chimes competes with the noise of the cars rushing by.

"Horse and buggies didn't make as much noise as cars do," Ward says.

Ward became interested in universal design by necessity. In 1977, at the age of 30, he became a quadriplegic after a fall.

Ward lived in this house before his accident. Now he has redesigned it so his personal-care attendant can live upstairs. The downstairs, where Ward lives, is a showcase of universal design, built to allow him to live as independently as possible. But he's also made it a model for other disabled people as well as the elderly. Architects, designers and consumers come from around the world to see Ward's house.

He starts the tour outside, at the main entrance.

"If we're talking about access or universal design or home modifications, it all starts outside," says Ward. "One of the things that's real important for people is a place to park their automobile, and then to get from that mode of transportation to the front door without any barriers. In most cases, those barriers end up being steps."

When Ward redesigned this place, he moved the main entrance to the back of the house, removed the stairs and added a smooth path that leads from his parking spot to the door.

The entrance uses a number pad instead of a lock-and-key system. With the pointer that he keeps attached to his hand, Ward can punch in a security code and the automatic door swings open.

Ward's personal attendant pushes his wheelchair into the kitchen. From a remote control on his wheelchair, Ward pushes a button to turn on the lights.

"The kitchen is built so it has multiple-level work surfaces," he notes.

"Many people can't stand long enough to do an entire task," he says. "For example, cooking or washing dishes or cleaning vegetables. And they want to sit."

So there are two sinks on the blue and pink kitchen island in the middle of the large, square room. One sink is at standing height. The other is a few inches lower, for sitting. The stovetop, too, can be raised or lowered to just three feet off the ground. And the cabinet of dishes comes down like an elevator.

A lot of things in Future Home move at the touch of a button. Curtains can be opened and shut by pushing a button, and a long coffee table can be raised until it becomes the dining room table.

Ward says the technology already exists to do all of this. It's just that people don't think of putting it in a house.

"Well, think about your car," he says. "You've got climate controls all over your vehicle. We have voice control over many of the things in the car itself. We have powered windows within the car. We seem to find a way to cram that into a little vehicle, yet we haven't looked at our own homes to think about how important it is to have the same thing there."

Ward works in his home office as a consultant on design and on various state disability commissions.

"My favorite part of the house is probably the study," he says. "Everything I want is within my reach in this part of the room."

His computer is programmed to respond to his voice commands. By speaking, he can control his environment.

"Listen to me," he commands; the computer turns on.

"Main Menu," he says, and the computer talks back: "Okey Doke," says the synthesized voice. Then Ward can give commands to close the shades or turn on the fan. For the television, all of the controls that you'd find on a regular TV remote control appear on his computer screen.

What would his life be like if he didn't have a house full of all this technology?

"Well, I can tell you, because I lived it for quite a while," he explains. "Coming home from a rehab facility, moving back into Mom's house, it was, 'Mom, can you take me outside? Mom, can you bring me in? Mom, can you turn the fan on? … On and on and on. Can you imagine what kind of pressure that is on an individual and how simple the technology is that we were using today to do all the things that Mom used to do for me?"

The devices add to the cost of a house, but Ward says it's not as much as you might think, especially as more companies make more of these devices. Ward says when he built the house 14 years ago, it cost about $46,000 to put in all these devices. He says the same systems could be installed today for just a fraction of that -- for less than $9,000.

Oh Give Me a Home Where I Can Age in Place

Text and images should be large and high-contrast on appliances around the home. Center for Universal Design hide caption

Is your home user friendly?

That’s a question for people with disabilities as well as for anyone who's aging (OK, so basically everyone).

The answer lies in a movement called "universal design."

Universal design aims to make products, services and living environments more suitable both for aging and disabled Americans. It has principles, which are spelled out by the Center for Universal Design.

These principles lead to safe, user-friendly products that everyone can use, to avoid stigmatizing or segregating those who need them.

On a practical level, universal design calls for brighter lights, safer stairs, symmetrical scissors (for righties and lefties) and other accommodations. The goal is to allow your family and friends to enjoy your home for years to come. For example...

Vision problems can complicate simple tasks like reading, cooking, cleaning and moving around your home. Install lights that will make it easier to read and do chores in different parts of your home. Take advantage of natural light when possible, for example, installing a skylight to illuminate a dark room.

You can also buy home appliances with pictures, words and tactile information on dials and keypads. Text and images should be high-contrast.

Some people may have or develop difficulty sensing hot and cold. To help avoid accidents, bathroom supply companies now make valves that limit water temperature from shower or bathtub faucets. Other safeguards include covers for stove burners and guards that fit over radiators.

To avoid missing a stair, use different shades of wood or carpeting for risers and treads. Consider soft, nonskid surfaces on bathtub bottoms, or new, competitively priced “soft” bathtubs, made of pliable but non-porous polyurethane-covered foam to reduce the dangers of slipping. Comfy, too!

As we age, arthritis may make it more difficult to grip, twist or turn doorknobs, faucet handles and lids. Levered handles, which you push down to open, can be installed on doors, cabinets, drawers and sinks.

Give Yourself a Break

If standing in front of a counter or sink becomes too tiring, you can hire a carpenter to create a cutout space underneath. The space will make room for a stool or wheelchair while you, say, wash dishes or prepare food. And if you don't have a garbage disposal or trash compactor, you might want to install the appliances. They'll reduce the number of trips to the trash bin as well as the bulkiness of your trash bags.

If building or remodeling your home, consider building wide doorframes that allow at least 36 inches of clearance for wheelchairs and walkers. Locate a bathroom and a bedroom on the ground floor, with roll-in or walk-in showers.

Most people are comfortable reaching into appliances or cupboards that are 27 to 48 inches above the floor, and a maximum of 20 inches deep. Keep those guidelines in mind when installing switches, outlets and thermostats. Easy-access appliances include side-by-side refrigerator-freezers and front-loading washers and dryers. Then there's retrofitting -- like installing lazy susans in corner cabinets and refrigerators. You might also want to construct work surfaces at different heights to suit the heights and abilities of your whole family.