Accessibility links
Generation Next: Video Games and Real-Life Choices Brendan Docherty has loved video games since he was a kid. Now at 25, he markets them for a living. Docherty is among a group of young adults being profiled in a series that explores how this time of war affects their choices and goals, and their sense of the future. 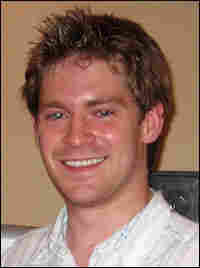 Brendan Docherty, a marketer for a video game company in Los Angeles, plans to apply to business school within the next two years. Neva Grant, NPR hide caption

The 42 million 16- to 25-year-olds in the United States — roughly 14 percent of the population — will have a major impact on American society as they rise into adulthood. In a series of profiles on NPR's Morning Edition and PBS's NewsHour with Jim Lehrer, Judy Woodruff looks at what makes Generation Next different from its predecessors.

Brendan Docherty is lucky and he knows it. He has loved video games since he was a kid. Now at 25, he markets them for a living. Docherty is among a group of young adults being profiled in a series called Generation Next, which explores how this time of war affects their choices and goals, and their sense of the future.

"I definitely feel I've hit the jackpot getting this job at this age," Docherty says. "I mean, I know our generation was probably showered with self-esteem growing up, so maybe that made us all think we were special snowflakes and that we've got to go out and do what we want to do."

But something happened to that sense of wide-open opportunity on Sept. 11, 2001, when Docherty was a sophomore in college.

"And it was like, what happens now? I mean, do we go to war? Is there going to be a draft? I was thinking, am I really going to be a soldier next year, fighting in the mud somewhere else, half a world away?"

He remembers how the optimism that Osama bin Laden would be captured turned to disappointment when the al-Qaida leader "slipped through our fingers" in Afghanistan.

"I believe it was promised to us that he would be brought to justice," Docherty says. "It's just frustrating that when it could have happened, it didn't."

At one point, he was leaning toward a career with the FBI — recruiters for the agency came to his high school career center. But his disillusionment with the war in Iraq turned him away from national service.

"What's the point of doing all that intelligence work if it's just going to be ignored or manipulated so that someone can justify going to war in a country that maybe isn't our best focus right now?" he says.

He also struggled with enlisting in the military.

"I'm no more special than anyone else's kid who's over in Iraq getting shot at," Docherty says. "Why wouldn't I enlist... That is a question that I kind of struggle with. Is it cowardice? I will admit, I have an aversion to being shot at and I am not a fan of getting blown up. Maybe the video games have taught me how easily someone can die. And there is no reset, there is no continue — I could die."