Accessibility links
Democratic Party Embraces 'Values' Debate Religious and moral issues mobilized record numbers of voters in 2004, to a Republican advantage. This year, Democratic candidates have taken up the debate, speaking openly about their faith -- and asserting that issues such as AIDS and poverty are about morality, too.

This is the second of two reports on the role of religion in the coming election. Listen to part 1: 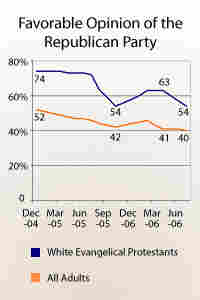 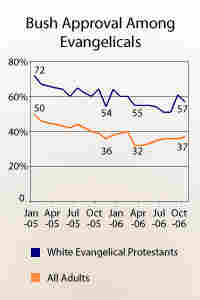 RELIGIOUS CONSERVATIVES AND THE GOP:

Even before the recent scandal involving former GOP Rep. Mark Foley's sexually explicit messages to underage former pages, support among religious conservatives for the Republican Party and President Bush had started waning, according to polling by the Pew Research Center for the People & the Press.

Pew's polls haven't picked up significant switches in party affiliation among the GOP's religious base. But the president's approval ratings among this group, which stood at 74 percent after the 2004 election, dropped to 54 percent after Hurricane Katrina, and have remained near these lows.

At the same time, fewer evangelicals say they believe the Republican Party "governs in an honest and ethical way." In January 2006, 55 percent of evangelicals polled by Pew said they thought this phrase described the GOP better than the Democratic Party. This month, just 42 percent still held this view. — Maria Godoy

Before Moses parted the Red Sea and led his people to the Promised Land, the Bible says he lived in the desert for years. Then God appeared in the form of a burning bush, confronted him and set him on the true path of faith.

For Democrats, their burning bush was the 2004 elections, when religious voters overwhelmingly supported President Bush, strengthening Republicans' control of Congress and leaving Democrats with two more years in the desert.

Since then, the Democratic Party has embarked on its own spiritual journey, and candidates like Rep. Ted Strickland in Ohio are spreading the word. Speaking to a standing-room-only crowd in Columbus, Strickland acknowledges the clergy in the room and reads from the Biblical book of Micah: "And what then is required of us, we are asked? But to do justice, to love mercy and to walk humbly with our God?"

Strickland, an ordained minister, is trying to become Ohio's first Democratic governor in 15 years. He's running against Kenneth Blackwell, an evangelical with deep ties to Christian groups. To counter that, Strickland has been reaching out to the state's large evangelical population.

"I think it is wrong when any single candidate or any political party feels ownership of the community of faith," he says. "I made a decision that I am not going to concede any part of the electorate to my opponent, and that includes the faith community."

Strickland is running ads on Christian radio, and talking openly about his faith. These kinds of tactics represent an about-face for a Democratic Party that's trying to find its way.

Democrats Engage in the 'Values' Debate

Already, a few stars have emerged as guides. Tim Kaine, elected as the Democratic governor of Virginia in 2005, took a year off from law school to work as a Christian missionary. His election is widely considered to be a model for Democrats trying to talk openly about their faith.

And Barak Obama, the junior senator from Illinois, has been taking his party to task.

During a speech to a Christian group a few months ago, Obama said, "There are some who dismiss religion in the public square as inherently irrational or intolerant, insisting on a caricature of religious Americans that paints them as fanatical, or thinking that the very word 'Christian' describes one's political opponents, not people of faith."

After 2004, leaders in the party realized that had to change. David Wilhelm, the former head of the Democratic National Committee, started a Web site called FaithfulDemocrats.com. It's designed explicitly for Democratic Christians.

"Hey, you can be a good Christian and be a good Democrat, too, all at once," Wilhelm says. "I think it continues to be a very confusing thing for many Americans to hear."

Wilhelm says Democrats have simply failed to engage in the values debate as aggressively as they should have; in 2004, they paid the price. And while much of the party's values are defined by the civil-rights movement and its religious roots, Wilhelm says that, as the party tried to appeal to the broadest possible base, religion then fell to the margins.

"In an attempt not to offend, we're not willing to be quite as explicit in appealing to, say, evangelical voters," he says. "As a result, we've come out on the short end of the stick."

Practicing What They Preach

However, in Tennessee, Harold Ford Jr. has taken that same stick and fashioned it into a cross.

In a television ad, Ford walks through a sunlit church sanctuary, with a white cross on a red banner visible just over his shoulder. He lays out his Christian credentials in one breath, then boasts about his voting record and derides his opponent, Republican Bob Corker, in the next.

But now that Democrats have opened the church door, they're being challenged to practice what they preach.

In Pennsylvania, Bob Casey, a pro-life Catholic Democrat, is running against incumbent Republican Sen. Rick Santorum, who has strong ties to religious conservatives. While speaking recently at his alma mater, Catholic University in Washington, D.C., Casey tried to deflect tough questions from audience members about his faith and policy choices.

A Catholic priest in the audience asked, "I've read that you're in favor of civil unions. If this is true, how do you accommodate this with your Catholic faith?"

Casey thanked the man for his question, then appeared to stall.

"I was one of your students a long time ago," he said. "I won't talk about the grade I got, but father, you haven't aged."

Eventually, the candidate responded, "I think the obligation of a public official is certainly to draw on a lot of information and inspirations for the position you take on a matter of public policy. I don't think, though, that your position on a public policy can be based on or mandated by a particular faith or religious point of view."

While conservative Catholics and evangelical Christians may be disillusioned with the Republican Party, abortion and gay marriage are still the issues that could determine their vote.

Meanwhile, some progressive religious leaders say Democrats will continue to lose out until they stop responding to the moral agenda set by conservatives and start setting it themselves.

Jim Wallis is the founder of the Christian group Sojourners. He's also a nationally recognized author and speaker on religion and politics. Wallis says Republicans and Democrats who claim to be Christians have strayed from the teachings of the Bible. And he says that poverty, AIDS, global warming and genocide are moral issues, too.

"We want a return to Jesus' words to correct the politics that have become so skewed by a partisan application of them," Wallis says. "Christians are supposed to be, first of all, known by obedience to Jesus Christ. We haven't seen or heard that in proclamations by those who claim to be Christian and are so active in public life."

Back in Ohio, Democratic gubernatorial candidate Ted Strickland agrees. While making sure to separate himself from the criticism, he admits his party has failed to recognize America's religious culture and its bearing on the political landscape.

"I think they have come to understand that if they don't speak out, if they don't express values, that the voting public may perceive that as a lack of caring, concern or commitment," he says.

Nov. 7 is judgment day. It will be up to voters to decide whether the Democrats' spiritual journey is enough to bring the party to the land of milk and honey, or whether it's back to the desert for two more years.