Accessibility links
'Flags': The Story Behind an Iconic Image of WWII Flags Of Our Fathers is Clint Eastwood's look at the World War II battle of Iwo Jima, which was symbolized around the country by the photo of six faceless Marines raising the flag over Mount Suribachi.

Listen
'Flags': The Story Behind an Iconic Image of WWII 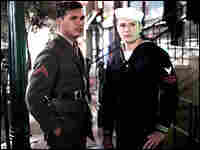 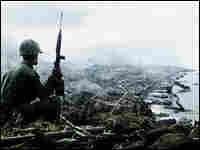 A scene from Flags Of Our Fathers. hide caption 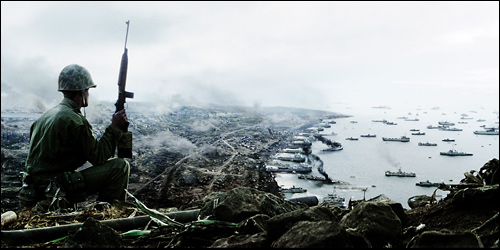 A scene from Flags Of Our Fathers.

When you hear the name of the Pacific island Iwo Jima, you probably picture soldiers raising a flag. The image in your head comes from a photo taken by Joe Rosenthal in 1945 -- a photo that is now the subject of the movie Flags of Our Fathers.

The film, directed by Clint Eastwood, explores not just how that famous photograph came to be, but also, what it came to mean.

The battle scenes in Flags are harrowing even before a shot is fired: troops landing on volcanic, black-sand beaches, hundreds of ships behind, seemingly no resistance ahead.

But your nerves jangle because you can see what the soldiers can't: gun barrels hidden in the brush, tracking them as they advance.

When violence explodes -- heads and helmets flying separately through the air -- death comes as unexpectedly, and as realistically, as it ever has in a war film.

So it's odd when something feels a little off the first time you see these same servicemen struggling up a hill to hoist Old Glory. There's no wind, not enough men, explosions getting drowned out by ... cheers?

Just as you're registering that something's wrong, the camera rises over the crest of the hill to show you why. This flag is being raised on a papier-mache mountain, surrounded by fireworks. It's part of a cross-country tour by the three surviving flag-raisers to sell war bonds.

As the film cuts back and forth from battlefield shelling to war-bond shilling, you understand that the home front is also taking a toll on these men.

One of them -- Ira Hayes, played by Adam Beach -- is so distressed at the disconnect between the flag-raising (which was arguably the least dangerous thing he did on Iwo Jima) and the way it's being used at home, that he begs to be returned to his unit.

As a director, Eastwood has made a late-career specialty of matters of conscience, and though he's filming on a grand scale here, it is internal conflicts that are his focus.

Working from a best-seller by the son of one of the flag-raisers, Eastwood bumps the iconic photo's reality up against the broader reality of troops under fire, and the calculated unreality of wartime morale-boosting.

Audiences will doubtless hear echoes in the story of more recent efforts to market an unpopular war, but Eastwood doesn't lean on them. Rather, he offers Flags of Our Fathers as a kind of eulogy for the passing of innocence, with even the film's look -- majestic, but drained of color -- suggesting how lives get sapped by combat and by myths.