Accessibility links
Industry Braces for Blowback from 'Blood Diamond' The upcoming Hollywood thriller Blood Diamond, starring Leonardo DiCaprio, focuses on the illegal gem trade. The diamond industry has already launched a sophisticated campaign designed to blunt any damage the movie might cause to holiday sales. 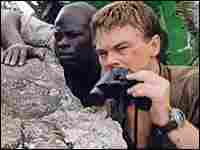 Blood Diamond is a Hollywood thriller, starring Leonardo DiCaprio, about the illegal gem trade. It doesn’t open for another couple of months, but the diamond industry has already launched a sophisticated campaign that seems designed to blunt any damage the movie might cause to sales this holiday season.

Set in 1999 in Sierra Leone, the movie presents a brutal portrait of the diamond business. Characters include a smuggler, a corrupt diamond syndicate and rebels who cut off the limbs of villagers to scare others into working in the mines.

But before audiences see any amputees this Christmas, the diamond industry wants people to know what's been done to halt the so-called blood diamond trade.

Last month, the World Diamond Council -- a trade group -- took out full-page ads in 10 newspapers. They touted the Kimberley Process, a three-year-old, U.N.-backed certification system designed to keep blood diamonds off the market.

"We want people who see the movie to understand it is the past," says Cecilia Gardner, an attorney with the World Diamond Council. "Lots has happened since that time."

"You really need to tell your story first," Mayer says. "If you don't tell your own story, someone else is going to tell it for you -- and chances are, you're not going to like the way it comes out."

The council hired Mayer a year ago. He didn't want to speak directly about this campaign, but talked generally about how to deal with movies that could cast an industry in a bad light. First: Get out in front of the release so you frame the issue.

"One of the things about big movies is they don't come out of the blue," he says. "You see them coming a long way off. So, what you want to do in a situation like that is start planning your response a year, 18 months before the movie comes out. Start talking about the issues that matter to you in a context that has nothing to do with the movie."

The diamond council tried to persuade the movie's director, Edward Zwick, to add a disclaimer, citing the Kimberley Process and pointing out that the civil war in Sierra Leone was long over.

Zwick is a respected figure in Hollywood. His past credits include Glory and Traffic. He never considered making a change.

"My reaction is, I try not to take notes from the studio," Zwick says. "And I really didn't think it was proper to take them from an industry lobby."

Zwick acknowledges the flow of blood diamonds has slowed, but human rights groups say that's due more to the end of wars in Sierra Leone and Angola than to the certification process. And Zwick says more needs to be done.

"In 1999, there were all sorts of estimates, varying from 15 percent to 5 percent, that diamonds reaching the world market had come from conflict zones," Zwick says. "That number has been significantly reduced, but it is a system that is yet imperfect."

Indeed, a recent U.N. report says that each year, at least $9 million in diamonds mined by rebels in Ivory Coast are smuggled onto the market. Zwick says he wants his film to provoke shoppers to ask questions.

"What I wanted to create in their minds is consciousness," he says. "A purchase of a diamond just has to be an informed purchase. I think after seeing this movie, people will feel it incumbent upon themselves to ask for a warranty, so as to guarantee the diamond they’re buying is not from a conflict zone."

How Long Will Awareness Last?

If the questions start coming, Ronnie Mervis is ready. Mervis owns several stores in the Washington, D.C., area. He's planning seminars for his staff and has written an article on the issue for a local lifestyle magazine. He says he's not worried about business.

"The movie -- no matter how good it is, no matter how big a blockbuster it is -- has its day and then it passes on," Mervis says.

Alex Yearsley works for Global Witness, a human rights group. He's on the other side of the issue. But on the question of sales, he agrees with Mervis.

"At the height of the blood diamond issue, when it was on the front pages -- pictures of Sierra Leonean children having had their arms cut off -- there was no discernable downsizing in diamond sales," Yearsley says.