Accessibility links
User Tips: How to Reshuffle Your iPod Your iPod can play videos from YouTube, backup your operating system and store Wikipedia entries -- if you know how to use it. Our handy guide will show you how to make the most out of your portable music player.

User Tips: How to Reshuffle Your iPod

User Tips: How to Reshuffle Your iPod 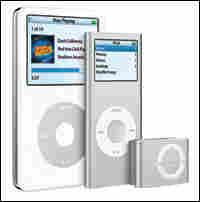 Your iPod can play videos from YouTube, backup your operating system and store Wikipedia entries -- if you know how to use it. Apple Computer hide caption

Happy Birthday to you.

I wish I could turn you off.

And turn you into a video game player, too.

There's so much the iPod can do, if you know what buttons to press. And there's so much more it will be able to do in a few short years. We asked three experts to share their guidance and their predictions.

iDon't Know How to Do Basic Tasks

1. How to Reset the iPod

You're in the middle of that killer Killers playlist and your iPod crashes. Don't fret. Chris Breen, author of The iTunes and iPod Pocket Guide, advises pressing the center click button and the menu button at the same time. After six seconds, your iPod should reboot.

Turning it off isn't obvious, says Macs for Dummies author Edward Baig. Press the Play/Pause button for two seconds and the device will shut down.

3. Retrieving Music after a Crash

If your hard drive crashes, your music has not escaped into the ether: It's still on your iPod. But getting it off your iPod and back onto your computer can be tricky, because the iPod folder on your computer will appear empty.

If you use Windows, you should enable the option to view invisible folders and items. Then, open the iPod drive on your computer (as you would locate a DVD drive or external drive) and find a folder called: Ipod Control. There should be a music folder in Ipod Control. Drag it to your desktop. Voila! Your music is in the folder and now stored on your computer.

If you use a Mac, you'll need to install a program called TinkerTool to show invisible folders and items. You can then use Finder to located the folder called Ipod Control. Drag the music folder to your desktop, and your music should reappear.

4. Use Shuffle on a Non-Shuffle iPod

Every iPod has shuffle technology. Breen says to go into the Settings menu, and click on Shuffle. You can choose whether to enable shuffle, and then choose whether you want to randomize your music by songs or albums. If you shuffle by albums, your iPod will play a full album, and then switch to a new album. Of course, if you own a shuffle, your music is randomized -- but there's no display screen to view what's currently playing.

5. Make Sure It's Never too Loud

Jeremy Horwitz, editor-in-chief of ilounge.com, says you can limit the maximum volume to prevent possible hearing loss. Go into Settings and click on Volume Limit to limit the volume for all audio. You can also specify slow, medium, or fast speeds under Settings for playback of audio books.

iWant to Do More

These tips depend on your iPod model. At this Apple Web site, you'll be able to determine which iPod you have and whether these how-tos will work for you.

Warning: Do not try advanced how-tos unless unless you're completely proficient with your iPod.

Software engineer Matt Swann wanted to download Wikipedia entries onto his iPod hard drive, but no program existed. So he wrote a Perl script called Wikipod, which traverses all links from a Wikipedia entry and downloads the contents onto an iPod hard drive. The iPod can store up to 1,000 entries, for easy encyclopedic knowledge on-the-go.

2. Give your iPod a Semi-Extreme Makeover

Jeremy Horwitz says you can change the graphics and fonts. You can also change the icons that appear on the screen. A tutorial is located online from Engadget.

Horwitz recommends RockBox, an open-source operating system that allows you to play multiple audio formats -- like, say, OGG files (another type of sound file) -- on your iPod. But he doesn't recommend downloading it unless you're a proficient iPod user.

iTube is a program that allows you to convert files from YouTube into iTunes. The videos can then be uploaded to your iPod.

5. Use Your iPod to Play Video Games

Though fifth generation iPods are equipped with games, earlier models do not have downloadable games. The Web site ipodarcade.com has a series of freebies that you can download onto your iPod.

Horwitz predicts a touch screen and an on-screen click wheel.

Baig would like to see a subscription model in addition to the current $.99 model on iTunes, so that users can download as much music as they'd like while paying a flat fee.

Picking up on "all sorts of rumors," he also expects Apple will eventually announce a combo phone/iPod device.

And Breen would like wider screens on iPod models. "I want to be able to flip the iPod on its side," he says.

He also sees Apple going wireless. "In five years," he predicts, "media will be floating in the ether, much like satellite radio today. You could walk around, hear a song you like, pause your iPod like a TiVo, and buy [the song] with a button. It will come to your device."