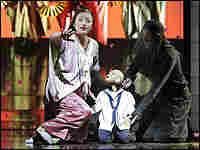 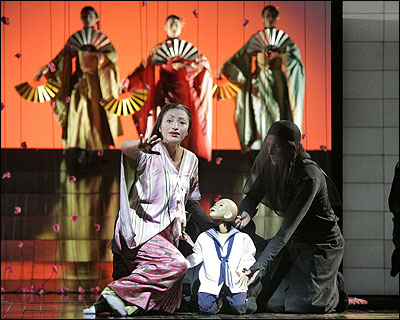 Cristina Gallardo-Domas as Cio-Cio-San, with her puppet son in Anthony Minghella's Madama Butterfly, at the Metropolitan Opera in New York through Nov. 18. 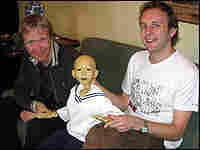 Minghella: Playing with Literalness in Theatre

On a dark and glimmering stage, the tragic Cio-Cio-San strolls amid falling cherry petals with her faithless American husband, Pinkerton. He'll desert her in the next act, but for now, they gaze adoringly at each other as dancers hold an arch of paper lanterns over their heads. This is Madama Butterfly, one of Puccini's most famous operas — and film director Minghella's debut at the Metropolitan Opera.

"We approached this production with as much humility as we ought to have had," Minghella says, "in the sense that singers are working all the time, and to be standing on the Met stage means ... they're the best singers in the world.

Minghella spent five years mulling over ideas for how he might make an opera, thinking about which opera to choose and how to adapt the skills he used in The English Patient and Cold Mountain to the opera stage.

"We are first-time opera makers, it's not for us to revolutionize opera," he explains. "It's for us to understand it and to bring to bear whatever it is that we can bring to the work."

Such as bringing more drama to the moments when singers aren't not singing.

Minghella's vision of Madama Butterfly plays at the Metropolitan Opera through Nov. 18.