Accessibility links
Homeowners Sue Insurers for Denied Katrina Claims Residents along the Gulf Coast whose property sustained damage in Hurricane Katrina are suing insurance companies for denying their claims. Insurers are citing the language of the policies, but attorneys for homeowners argue many of these claims were improperly denied. 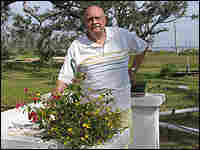 Dr. Wesley McFarland, 83, stands near a set of steps, all that remains of his two-story home in Bay St. Louis, Miss. Kathy Lohr, NPR hide caption 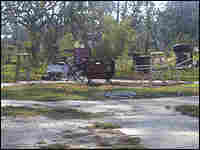 The lot where a Bay St. Louis home once stood is now just a slab of foundation. Katia Dunn, NPR hide caption 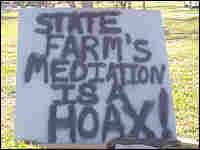 One of many signs that stand in yards in Bay St. Louis, Miss., where Hurricane Katrina destroyed many homes. This one is on Dr. McFarland's property. Katia Dunn, NPR hide caption

Hundreds of homeowners along the Gulf Coast are suing insurance companies for refusing to pay for damage that their waterfront properties sustained from Hurricane Katrina. In denying their claims, insurers cited the language of the policies. But attorneys for homeowners argue that many of these claims were improperly denied.

Today, a set of concrete front steps is the only sign of the home that remains. McFarland runs a sprinkler in the hope of getting grass to grow back on his property. He doesn't understand why his insurance company, State Farm, denied his claim.

Defining Damage from Wind, Not Floods

Since nothing is left on the property, it's hard to say exactly how McFarland's house was swept away. But that's exactly the point. State Farm spokesman Fraser Engerman says much of the damage along the coast was caused by water that came in after the storm.

"We don't cover floods," Engerman says. "If the facts show that the cause of the damage was wind or wind-driven rain, such losses will be generally covered. But if the evidence shows it was due to flood or storm surge, that is clearly not covered in the insurance policy."

McFarland says his house "exploded due the hurricane winds, before the water came." Inside the FEMA trailer that sits on his property, he pulls large photographs out of an envelope that show the aftermath of the storm. The images show trees twisted and blown over in all directions. He says "helter skelter" winds were responsible.

McFarland's case and five others like it are getting ready to go to trial. They are known as "slab" cases because that's all that's left of their homes -- the foundation.

McFarland's attorney, Zach Scruggs, says that case law suggests that if wind was responsible for the initial damage to the home, "it doesn't matter what happened after that."

"When you have a 120 to 150 mile-per-hour winds beating on your house, for two to three to four hours before the water gets there, and the water is coming by the wind also, then there's coverage," Scruggs says.

"I think the motivation was for insurance companies to pay as little as possible for as long as possible," Scruggs says.

Two adjusters who used to work for State Farm have stepped forward, turning over thousands of pages of documents which they say suggest the company willfully denied valid claims. They are now working for Scruggs.

"They saw some things that they believed weren't proper in the adjusting and handling of these claims," Scruggs says.

A federal judge recently ordered four managers for State Farm to testify about the process the firm used to deny claims in these wind-water cases.

This past summer, in a Mississippi case involving Nationwide, a federal judge ruled that a couple whose home was damaged by Katrina was entitled to compensation for wind damage. But the facts in that case showed little actual damage caused by wind.

Some say the case is a good precedent for homeowners who will eventually get paid something for hurricane damage in the future. Others say it's a victory for insurance companies. State Farm spokesman Engerman says the majority of his clients are satisfied.

"We've closed over 98 percent of the claims that we received," Engerman says. "We paid out $3.5 billion to our policy holders on the Gulf Coast. So the assertion that somehow State Farm is not paying on claims is simply wrong."

Hoping for Recourse from the Courts

State Farm and other insurers say homeowners had to have separate flood-insurance policies to cover water damage. They are also asking the judge to move the trials farther north, out of the Gulf Coast, arguing that insurers can't get a fair trial in the region.

Animosity against insurers among local homeowners is hard to miss. Among them is U.S. Rep. Gene Taylor, who owned a house in Bay St. Louis and received no compensation from his homeowners' policy. Last November, he offered these stinging remarks on the House floor:

"I want to go on record as saying that I think there ought to be a national registry of child molesters -- and at the moment, insurance-industry executives -- because I think Americans ought to know if they live near one."

On vacant properties along the Gulf, homemade wooden signs have gone up vilifying insurance companies. Many who live here say little rebuilding is happening in these coastal communities, because people just don't have the money to pay mortgages on property they lost, and build a new home, too.

So they're waiting to see how this new set of legal cases is decided.

Signs of the Times 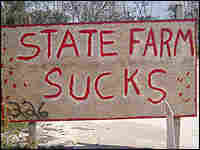 Handwritten signs on empty lots where homes once stood in Bay St. Louis, Miss., are visible evidence of the frustration and anger many homeowners feel toward insurers who've denied their Katrina-related claims. Katia Dunn hide caption 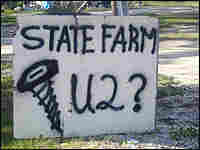 It's still barren in Mississippi coastal communities where Katrina hit 14 months ago. In Bay St. Louis, most of the houses that once sat across from the Gulf are gone. Instead of front porches, FEMA trailers, lawn chairs, and BBQ grills sit on empty lots, facing the blue water.

And everywhere there are signs. Some bear the familiar "For Sale" pitch. A few carry slogans, like "Gone to the Bahamas." But in Bay St. Louis, the most common signs are the handwritten, plywood kind, bearing messages of rebuke against insurance companies.

In Dr. Wesley McFarland's yard, a sign next to his American flag reads "State Farm's Mediation is a Hoax." McFarland says he tried the mediation program before deciding to sue the company over what he says is failure to pay his claim. He bought his home in 1953; Hurricane Katrina destroyed it. The insurance company says McFarland is not entitled to any payment.

Other residents, including Bob and Pat Erichsen, say they didn't try mediation because they had such a difficult time getting an agent to come to their property in Pass Christian, Miss.

The Erichsens were so upset that they wrote a letter to the CEO of State Farm. The letter says in part, "We are shocked, amazed and disappointed by your response and lack of support to our Katrina claim."

The Erichsens are now suing State Farm. The company says it will not discuss ongoing litigation.

The couple had a federal-flood insurance policy, as well as homeowners' insurance. But they could not recoup all of their loss from the government's flood policy. They say the combination of policies was supposed to protect them in case of a catastrophic event like Katrina.

Bob Erichsen says he and many others in Bay St. Louis feel betrayed. "I have a very low opinion of the insurance industry at this moment," he says.

People in town seem exhausted, constantly worrying whether they'll be able to rebuild.

Although the Erichsens used their own retirement savings and a loan from the Small Business Administration to start over, Pat Erichsen says the ordeal is wearing them down, both physically and emotionally.

"The emotional exhaustion is taking its toll," she says. "The stress level has been dragging everybody down."

Many along the Gulf admit they are depressed. Theirs is an altered landscape. Trees lie broken and dying. There is little new construction. Bob Erichsen says it looks as if Katrina hit just a few weeks ago.

"You can drive around and you can see," he says. "It still looks like a disaster. It's just a big mess."