Accessibility links
A Young Jazzman's Funky Throwdown It's funny how the best track on Do the Boomerang, Don Byron's tribute to legendary R&B saxophonist Junior Walker, gives James Brown's "There It Is" a makeover. Byron, arguably his generation's premier jazz clarinetist, covers James Brown on one of the year's zestiest jazz discs. 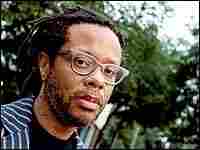 It's funny how the best track on Do the Boomerang, Don Byron's tribute to legendary R&B saxophonist Junior Walker, gives James Brown's "There It Is" a makeover. Even more peculiar is that Byron, arguably his generation's premier jazz clarinetist, plays mostly tenor saxophone throughout the album, not that that stops him from making Do the Boomerang one of the year's zestiest jazz discs.

Eccentric juxtapositions are a part of Byron's modus operandi, as the very existence of his Contrasting Brilliance: The Music of Henry Mancini and Sly Stone would indicate. Connecting the dots between Walker and Brown isn't so far-flung, even though the former was associated with Motown and Brown's soul power was decidedly southern. By including "There It Is," Byron reminds his audience that in spite of Walker's Motown affiliation, he wielded a bristling, countrified tone that differed from Detroit's more manicured soul. It's easy to imagine Brown and Walker crossing paths — and the latter sitting in the Godfather of Soul's renowned horn section.

Byron's saxophone playing isn't as distinctive as his work on the clarinet. Still, he forges a convincing sound, and he's savvy enough not to mimic Walker or Brown's famous saxophonists: Pee Wee Willis, St. Clair Pinckney or Maceo Parker. Instead, Byron channels the mellifluous soulfulness of Hank Mobley, then engages his collaborators in a funky throwdown that's so vivacious, he sounds as if they were doing the boomerang after all.

Album
Do the Boomerang: The Music of Junior Walker
Artist
Don Byron