Accessibility links
One Mom's Stint as the Healthy Halloween Grinch Betsy Block knew something had to change: She could remain a self-righteous outsider, fighting a powerful tide of sugar, or she could join the party. She shares her attempt to inject some nutrition into Halloween.

One Mom's Stint as the Healthy Halloween Grinch

One Mom's Stint as the Healthy Halloween Grinch 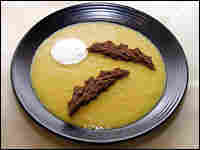 Author Betsy Block's "You Must Eat This If You Want To Go Trick-or-Treating" Squash Soup, with pumpernickel bats. Scroll down for squash soup recipe, and instructions for other Halloween treats. Andrew Pockrose hide caption 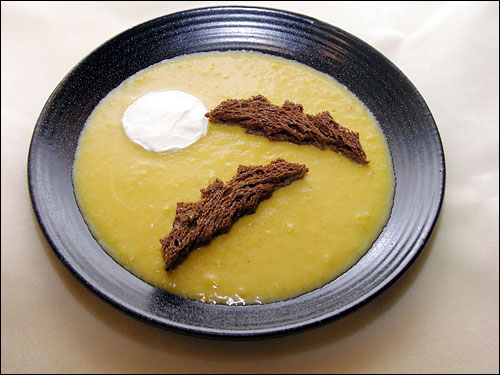 Author Betsy Block's "You Must Eat This If You Want To Go Trick-or-Treating" Squash Soup, with pumpernickel bats. Scroll down for squash soup recipe, and instructions for other Halloween treats. 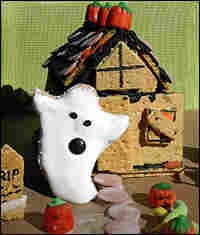 Block's attempt to stay away from sugar on Halloween weren't entirely successful, though: A graham cracker haunted house and a ghost made of whole wheat bread and Fluff demonstrate her mixed results. Andrew Pockrose hide caption 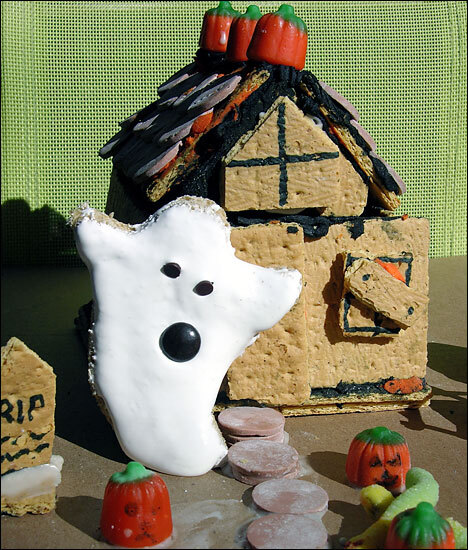 Block's attempt to stay away from sugar on Halloween weren't entirely successful, though: A graham cracker haunted house and a ghost made of whole wheat bread and Fluff demonstrate her mixed results.

I was once a child who loved Halloween, but now I'm a mom and want my kids to keep their teeth. That's why I've become a Halloween Grinch.

Consider the facts. The U.S. Census Bureau says 36 million kids ages 5 to 13 go trick-or-treating each year. Add in those younger than 5 and older than 13 and that number grows even bigger. Factor in all those parents who are de facto trick-or-treating by stealing candy from their kids and the statistic goes through the roof. The per capita consumption of candy in 2004 was 25 pounds, much of which, not surprisingly, was eaten this time of year. (Just to put it in perspective, this is more than twice the amount of carrots eaten.)

I knew, however, that something had to change. I could remain a self-righteous outsider, swimming against an overwhelming tide of sugar, or I could join the party. With two kids in the house, the first plan didn't seem prudent. I had an idea.

For a couple of years, my daughter has been asking to make one of those kitschy Halloween food crafts you see in all the parenting magazines, and while normally I say no (too much work, too much sugar, I'm no fun), this time, I decided to be a cool mom and say yes. As soon as I agreed to it, though, I felt uncomfortable. All that candy plus homemade treats?

Frantically trying to backpedal, I said enthusiastically, "Let's do a fun Halloween treat, but let's make it healthy!"

"I have an idea for something healthy!" my 5-year-old daughter gamely chimed in. "How about a frosted cookie sprinkled with sugar, and we put it on a plate surrounded by beans and broccoli?"

"Or how about an enchanted broccoli forest?" I added excitedly.

"How about not," a sullen pre-teen voice piped up.

"Oh, I know," my daughter said breathlessly. "Can we do the broom?"

The broom? There's nothing I wanted less than to attempt this hellishly complex project involving icing, cookies and four kinds of candy, one of which I've never even heard of, all of which must be cut and assembled, with surgical precision, into a miniature witch's broom.

My daughter had seen it in a magazine article given to her by a beloved but clearly uncaring friend of my husband. I knew just what to say to distract her:

As for the sassy 10-year-old, there was no stopping him once he'd thought of his ideal Halloween craft: a graham cracker haunted house -- decorated, of course, with lots of candy. I tried to talk him out of it, but that was a lost cause. My idea, my fault.

The experiment in embracing Halloween wasn't a total bust; the edible haunted house turned out pretty charming, and even I have to admit that the ghosts -- the ones we made on whole wheat bread -- were cute.

My kids will be joining millions of their candy-seeking compatriots across the nation in begging for candy from strangers Oct. 31, but only after they've had enough of Mama's "You Must Eat This If You Want To Go Trick-or-Treating" Squash Soup. I'm still a Grinch, but I do prefer the carrot to the stick. Even if no one's actually eating it. 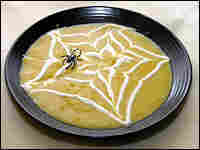 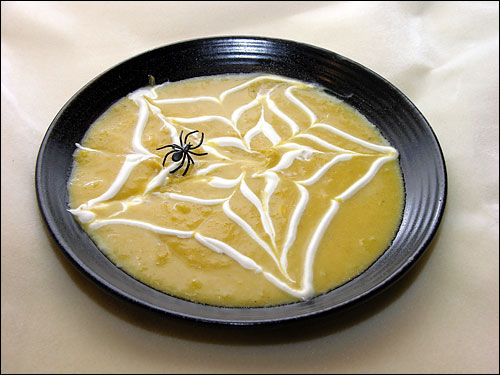 I decided on butternut squash because it comes pre-peeled in 20-ounce bags, but any winter squash will do. If you want to buy squash and peel it yourself, kudos.

Melt the butter in a pot, then add the chopped onion. Cook over medium heat for 5 to 10 minutes, or until the onions are soft but not brown.

Add the water, squash and spices, bring to a simmer and cook for 25 minutes, or until the squash is very soft. Puree in a blender and adjust seasonings if necessary. 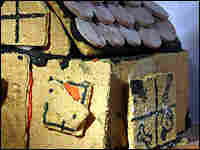 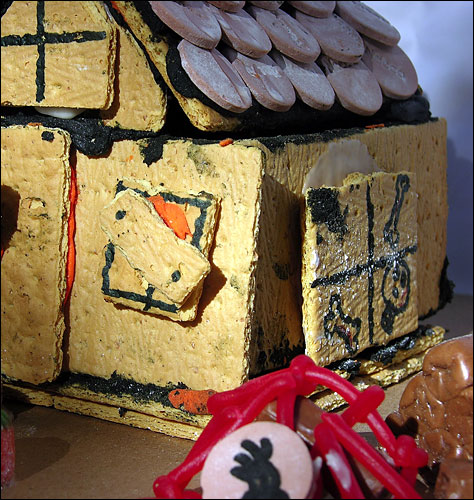 The kids made their haunted houses with graham crackers held together with store-bought icing.

Due to overwhelming regret that I'd said OK, I had to recuse myself from the project, but I know from past experience that the best way to do this is to decorate the graham crackers first, let them dry, then build the house (with more sugary icing as the mortar, naturally). 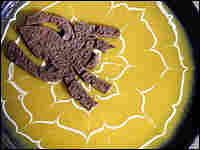 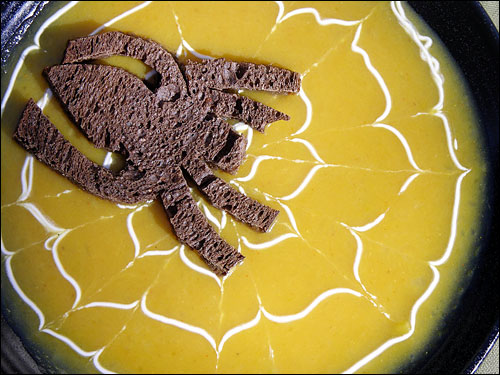 It's easier if you flatten the bread with a rolling pin first, but this isn't necessary. Cut shapes with a cookie cutter, knife or scissors, brush with vegetable oil, sprinkle with salt and pepper, then toast.

Or you can use plastic toys such as spider rings, making sure to warn everyone before they dig in, and providing a dish of water to rinse them off. 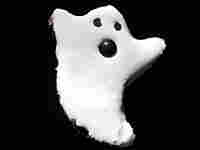 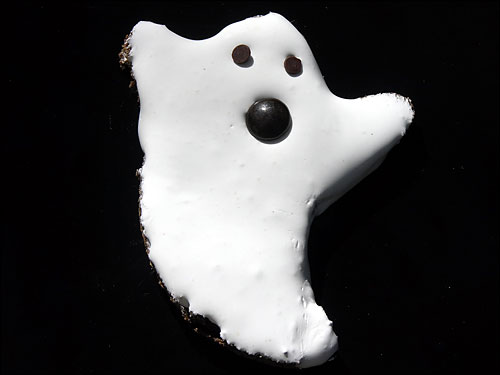 We made the ghosts by cutting out (whole wheat) bread ghosts with a cookie cutter and covering them with Fluff. We used miniature chocolate chips for the eyes and an M&M for the mouth. The M&M bleeds color after a few minutes, so make the face right before serving.