Accessibility links
Rove Sees No GOP Fall in the 2006 Election Karl Rove, President Bush's top political strategist, says he doesn't believe the polls -- at least those that predict the GOP will likely lose control of Congress. The Republicans have a huge financial advantage in the home stretch, Rove says.

Listen
Rove Sees No GOP Fall in the 2006 Election 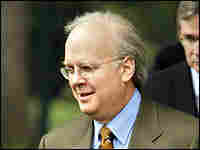 Karl Rove, President Bush's top political strategist, says he doesn't believe the polls -- at least the public polls that claim the Republicans are likely to lose the House of Representatives and possibly even the Senate on Election Day.

"I see several things," Rove says. "I'm allowed to see the polls on the individual races. And after all, this does come down to individual contests between individual candidates."

In addition to polls not generally available to the public, Rove says the Republicans have a huge financial advantage in the home stretch.

Citing spending and contribution reports, Rove said, "at the end of August, in 30 of the most competitive races in the country -- the House races -- the Republicans had $33 million cash on hand and Democrats had just over $14 million."

The money, Rove says, will be used for advertising, as well as to coordinate volunteers, the grass-roots workers who get voters to the polls.

And despite recent reports and polls that show a voting public fatigued by the direction of the war in Iraq, Rove thinks the midterm elections will be decided on other issues, too.

"I think Iraq and the economy play a role in virtually every race," Rove says. "But there are also local considerations in the local contest between two individuals, that at the end of the day matters for a great deal of the contest."

Robert Siegel talked with Rove at Radio Day on the North Lawn of the White House this morning.