Accessibility links
Sudan Fighting Surges Anew as Rains Stop Melissa Block talks with New York Times reporter Lydia Polgreen. Polgreen, who is based in Dakar, has reported extensively on the conflict and the humanitarian crisis in Darfur. The rainy season has just ended in northern Sudan, reinvigorating the fighting there. Polgreen recently traveled to the border with Chad.

Melissa Block talks with New York Times reporter Lydia Polgreen. Polgreen, who is based in Dakar, has reported extensively on the conflict and the humanitarian crisis in Darfur.

The rainy season has just ended in northern Sudan, reinvigorating the fighting there. Polgreen recently traveled to the border with Chad, where fighting has been most active of late.

The prospects of a political resolution are dim, Polgreen says. 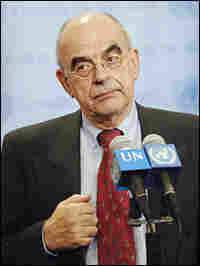 Sudan's Arab-led government on Sunday ordered the special representative in Sudan of U.N. Secretary-General Kofi Annan expelled from the country. Postings on Jan Pronk's personal Web site about developments in Darfur led to his expulsion. The 66-year-old former Dutch Cabinet minister was in Khartoum in an effort to help resolve the crisis in western Sudan's Darfur, which is threatening to widen into a regional conflict.

Pronk accused Sudan's army of violating U.N. resolutions by mobilizing Arab militias in Darfur. His comments on his Web blog at janpronk.nl infuriated Sudan's military, which accused Pronk of being a danger to national security and of "psychological warfare against the Sudanese army."

Pronk's blog entry of Oct. 14 noted that the Sudanese army had suffered two humiliating defeats by the Darfur rebels and that army morale was low. He said some generals had been fired and some soldiers in north Darfur were refusing to fight.

"Reports speak about hundreds of casualties in each of the two battles, many wounded soldiers and many taken as prisoner," Pronk wrote on his blog.

He also reported that Sudanese troops were working with militias linked to the government-backed Janjaweed militia.

"This is a dangerous development. (U.N.) Security Council resolutions which forbid armed mobilization are being violated," Pronk wrote.

Janjaweed loosely translates to "devils on horseback." The militiamen are widely accused of a three-year campaign of murder, rape and looting against African civilians in Darfur. The United States has described the violence in Darfur as genocide, but a U.N. investigation stopped short of using the same term.

Sudanese officials said Pronk had overstepped his mandate and ordered him to leave. His departure comes amid an escalation of violence in Darfur. For more than three years now, civilians have been the main casualties and targets.

Pronk had been the chief champion of U.N. peacekeeping troops for Darfur, to replace the overstretched and woefully under-resourced African Union force. The AU force has been unable to protect black African civilians and the relief workers trying to help them.

The Africans lack both the military wherewithal and the robust mandate to deal with the violence in Darfur. The Sudanese government has successfully resisted all international pressure to allow U.N. peacekeepers into Darfur, saying this would be a foreign invasion force violating the sovereignty of Sudan.

Darfur was a region already awash with military arms long before the current conflict erupted. Since the country's independence in 1956, successive weak governments in Sudan have used tribe-based militias to fight proxy wars. Darfur also has a long history of clashes over land and water rights among the African tribes and Arab pastoralists.

The current conflict began in early 2003 when predominantly Muslim rebels -- the Sudanese Liberation Army and the Justice and Equality Movement -- started attacking government forces and installations in Darfur.

The rebels said they were tired of Darfur and its people being marginalized by the Sudanese government. The militants' attacks caught Khartoum by surprise, and it had very few troops in the region. In response, it mounted a campaign of aerial bombardment in support of ground attacks by the Janjaweed.

Only one rebel group signed a peace deal earlier this year, and this incomplete truce has served to further fracture the combatants and widen the conflict. Previously, fighting had been confined mostly within Darfur's arid borders. Now, the conflict has crossed Sudan's border into neighboring Chad, wreaking havoc among displaced Chadians forced to flee their homes in the east.

This week, The New York Times reported on the new battlefield in Darfur on the Chad/Sudan border.

Stepping from one bloodied corpse to another, a Darfur rebel commander is quoted as saying, "You see, they send black men to kill black men. We are waiting for them to send Arabs for a real fight."

Sudan and Chad regularly accuse one another of harboring and backing the other's rebels.

All sides are well supplied with weapons, and the Darfur war could be poised to expand into a regional conflict. The crisis is far from over and embattled civilians on both sides of the border between Chad and Sudan are bracing themselves for more suffering. Meanwhile, a U.N. peacekeeping force is no closer to being deployed in Darfur.