Accessibility links
Short of 'All,' String Theorists Accused of Nothing A provocative branch of physics called string theory might explain everything in the universe, such as how matter came into being and why space and time exist. But others say string theorists have zero proof to back their ideas.

Listen
Short of 'All,' String Theorists Accused of Nothing 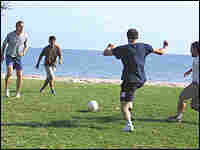 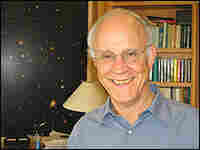 Books on the Debate

Warped Passages: Unraveling the Mysteries of the Universe's Hidden Dimensions, by Lisa Randall

The Cosmic Landscape: String Theory and the Illusion of Intelligent Design, by Leonard Susskind

Hiding in the Mirror: The Mysterious Allure of Extra Dimensions, from Plato to String Theory and Beyond, by Lawrence M. Krauss

The Trouble With Physics: The Rise of String Theory, the Fall of a Science, and What Comes Next, by Lee Smolin

Not Even Wrong: The Failure of String Theory and the Search for Unity in Physical Law, by Peter Woit 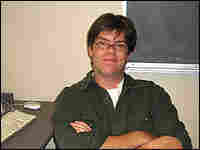 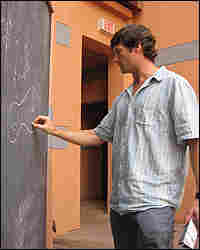 A provocative branch of physics called string theory might explain everything in the universe, such as how matter came into being and why space and time exist. Or, the theory might explain nothing. But for more than 30 years, it has captivated some of the best minds in physics.

This intellectual feud that has spilled into the greater world -- and onto a soccer field in Santa Barbara, Calif. There, physicists who spend their days pondering a universe that has nine or 10 dimensions of space, or who suspect that our universe is just one of jillions, get a chance to experience a true-to-life, three-dimensional ball.

Twice a year, string theorists visiting University of California, Santa Barbara take on their colleagues in a friendly game of soccer. They have never lost a game. It has become a point of pride -- especially now. Off the field, string theory is under attack.

Astronomer Robert Kirshner, on sabbatical from Harvard, agreed to referee the most recent game, which takes place on a strip of grass between the beach and the barbecue pit. And Kirshner can't resist a quip when he discovers there are only eight players on the string-theory team.

In the soccer match, string theorists who are in town for a conference are taking on another group of visitors: high-power laser physicists. One of the players is Albion Lawrence, from Brandeis University. He may not be a soccer star, but he does have a passion for string theory. He says the idea was really born in the late 1960s, when a physicist devised a mathematical formula that described a particular sub-atomic particle.

Physicists puzzled over this formula for a while, and then came to realize that it was not only describing a particle, it was describing vibrating strings.

"Among other things, the higher the frequency that the string vibrates, the more mass of the particle," Albion says as he demonstrates on his guitar.

Roughly speaking, he says, a mathematical formula that describes how the guitar string vibrates is what a string-theory formula would look like.

The theory had immediate appeal. How tidy to think that all the fundamental particles, like quarks and gluons and leptons, were actually the same string, just vibrating differently. And all the forces of nature were just variations on this string theory.

Of course, there are a few odd problems with this. For example, string-theory math suggests that there are nine or 10 dimensions of space, not just the three we perceive.

Back on the soccer field, the opposing team quickly scores a goal. The string theorists are stunned. They've never even been behind in the nine-year history of this game.

And these days, string theorists aren't just being challenged on the soccer pitch. In the past year, critics have written three books attacking the basic premise of string theory. Lawrence Krauss at Case Western Reserve University wrote Hiding in the Mirror: The Mysterious Allure of Extra Dimensions, from Plato to String Theory and Beyond.

"I kind of think of string theory as being like a promising young assistant professor, you know, who looks really smart," Krauss says. "But we usually don't give them 30 years to produce something."

Sure, he says, the ideas of string theorists are provocative. The problem is they are all unproven, and may be untestable with the current technology. By some reckoning, an atom smasher the size of the galaxy would be needed to see strings directly.

"As I like to say, there's at this point as much experimental evidence that quarks are made up of little pink elephants as they are of strings," Krauss says. "So I think that it behooves us to be honest and not claim for our theories more than we produce, because ultimately, that's going to come back and bite us."

And string theory has grown vastly more complicated over the past few decades. Every time a new problem arises, string theorists weave astonishing new and complicated explanations to get around them. For example, the theorists get around one problem by saying there are more universes out there than there are atoms in our universe. Krauss says it's hard to know whether to be amazed that we live in such a bizarre place, or worried that theorists have lost their way.

"To the extent that we even understand string theory, it may imply a massive number of possible different universes with different laws of physics in each universe and there may be no way of distinguishing between them or saying why the laws of physics are the way they are," he says. "And if I can predict anything, then I haven't explained anything. If I have a theory of everything, then in some sense, I have a theory of nothing."

Meanwhile, on the field, the string theorists are still out of sync. At the half, the score is two to one, with the string team losing and looking none too happy about it. Referee Bob Kirshner comes to the sidelines for a beer, and a quip.

"There was actually a brief moment where someone was playing with skill, and I blew the whistle immediately to stop the game, because that was way overboard," he says.

David Gross, the director of the Kavli Institute for Theoretical Physics and the picnic's benefactor, is concerned that the game will end before the meat is off the grill. Kirshner reassures him with a physics joke: "You know how it is, there's only the time on the clock, there's the out-of-bounds time, there's the injury time, there's the relativistic correction."

The institute director occupies a curious place in the string-theory debate. Gross won a Nobel Prize a few years ago for work in a conventional branch of theoretical physics. But now he's a strong proponent of string theory.

"Even those of us who work in the field aren't really sure what string theory is or what it's going to be," Gross says. "So when you're in this kind of speculative, exploratory science, it's important to have faith because you're out on a big limb. So I think it's really a question of whether we believe this is the right direction; and that I do believe rather firmly."

Gross has heard all the criticisms of string theory and he has ready rebuttals.

"One is rather flippant but correct," he says, "and it's that there's nothing else. There's no other game in town."

Nothing else, in his view, really provides a way to think about the biggest and most interesting problems in physics.

On the soccer field, things remain grim for string theorists. Santa Barbara scientist Steve Giddings is pacing on the sidelines, trying not to be nervous.

"We'll give them some more time, we'll start using the extra dimensions to catch up," he jokes.

The Search for Evidence

Giddings is actually feeling somewhat more optimistic about the fate of string theory these days. That's because in a year or two, a powerful new atom smasher will open up near Geneva, Switzerland. And there is at least a remote chance that the accelerator can finally provide some real evidence for string theory.

"The best we'll probably do is get some indirect hints for what string theory is all about," he says. "But then there's always this jackpot scenario where we could actually start seeing direct evidence."

If the strings turn out to be relatively large, Giddings says particle collisions in this accelerator could start to pluck the string of gravity, if you will. And if the scientists are extraordinarily lucky, Giddings says black holes could form -- and then quickly evaporate.

"It's not something that we would worry about, in the context of, say, planet Earth," he adds, "but we would really see these as very unusual-looking events in the particle detectors there."

And string theory would not only be vindicated, but great excitement would ensue. Even most string theorists say this is a real long shot.

Now the question is whether string theorists can even hit the jackpot on more comfortable turf: the soccer field.

They score, keeping intact their perfect record -- on the soccer field, at least.

"Proves string theory is right," he says. "We have experimental confirmation."

And he'll take the win any way he can get it. 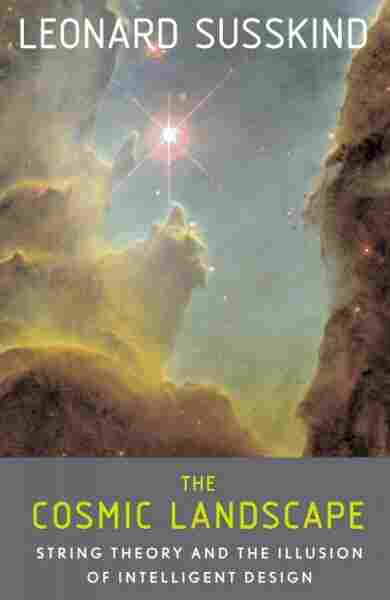 String Theory And the Illusion of Intelligent Design 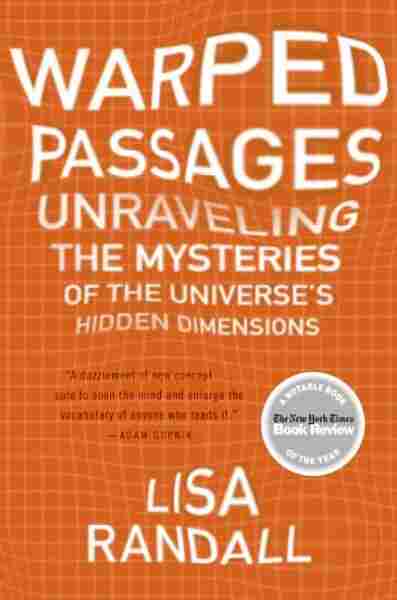 Unraveling the Mysteries of the Universe's Hidden Dimensions 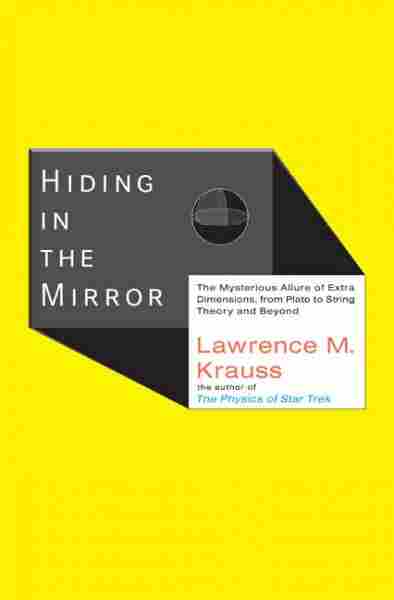 Hiding in the Mirror

The Mysterious Allure of Extra Dimensions, From Plato To String Theory And Beyond

Title
Hiding in the Mirror
Subtitle
The Mysterious Allure of Extra Dimensions, From Plato To String Theory And Beyond
Author
Lawrence M. Krauss 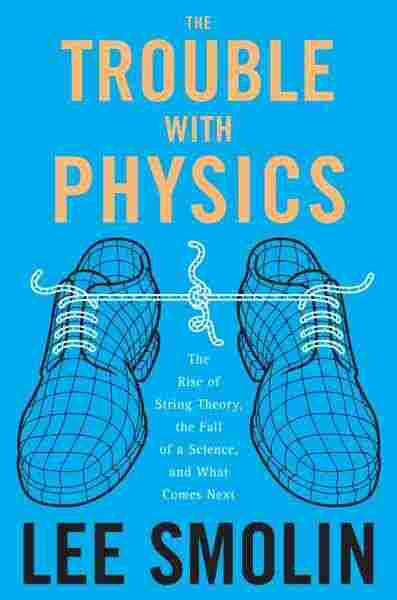 The Trouble With Physics

The Rise of String Theory, the Fall of a Science, And What Comes Next

Title
The Trouble With Physics
Subtitle
The Rise of String Theory, the Fall of a Science, And What Comes Next
Author
Lee Smolin 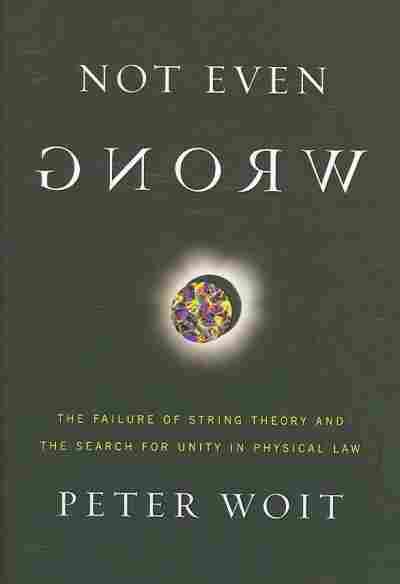