Accessibility links
Americans and African Adoptions Adopting a child is never easy, but cross-cultural adoptions come with their own challenges. Guest host Lynn Neary discusses some of the issues raised when Americans adopt African children.

Only Available in Archive Formats.
Americans and African Adoptions

Adopting a child is never easy, but cross-cultural adoptions come with their own challenges. Guest host Lynn Neary discusses some of the issues raised when Americans adopt African children.

Melissa Faye Greene, author of There Is No Me Without You: One Woman's Odyssey to Rescue Africa's Children

Adopting a Baby from Africa, Famous or Not

Adopting a Baby from Africa, Famous or Not 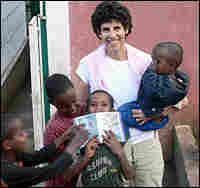 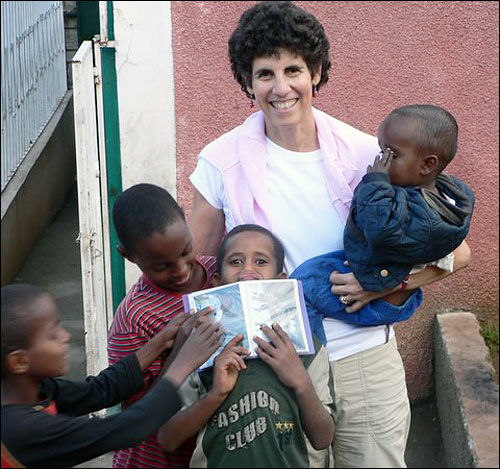 Writer Melissa Fay Greene with orphans in Ethiopia, including her soon-to-be-adopted son, Yosef (to Greene's right in red-striped shirt).

Madonna's adoption of a little boy from the African nation of Malawi last week has enraged celebrity-watchers and commentators.

Most seem to find it impossible to picture this boy in her family. Opponents suspect Madonna has ulterior motives, rather than adoption's usual impetus, which is, simply motherhood.

If the backlash arises mostly from the public's distaste for Madonna's career, then I plead ignorance. I've never seen her perform nor bought one of her albums.

But I know about adoption from Africa.

My husband and I have four children by birth and three by adoption. Two of our children were orphaned by HIV/AIDS in Ethiopia and lived in orphanages before joining our family. Helen arrived at age 5, five years ago; Fisseha came at age 10, two years ago. Later this fall, a pair of brothers, Yosef and Daniel, currently living in an overcrowded foster home in Addis Ababa, will join our family.

"Aren't their transitions terribly difficult?" people ask us, just as onlookers have predicted that Madonna's African baby will find the transition to an affluent life too difficult.

By the end of 5-year-old Helen's second week in America, I started finding new "favorite places" saved on my computer. Alongside the usual news sites and journalism blogs, I suddenly had Barbie.com, barbieclothes.com and americangirldolls.com.

She quickly let us know, however, that all was not perfect: She was not pleased to be sharing a bedroom with 6-year-old Jesse because he was leaving Spiderman action figures all over the floor. Helen made several efforts to evict him by gathering up all his things and placing them in a neat pile outside the door.

Helen had lived with her widowed mother in a mud hovel in Addis Ababa; she had been her beloved mother's chief caregiver in the last year of her life; but somehow sharing a bedroom with her brother was not how she'd envisioned her new life in America.

Finally one day, completely fed up, Helen demanded to know: "If I was not going to have my own bedroom, why did you adopt me?"

Fisseha, after losing his parents early in childhood, worked as a goatherd on the great plains of Ethiopia and was brought to an orphanage by a kind elderly woman when he was 9.

On one of his first nights in America, our older sons and their friends were watching the NBA playoffs on TV. There were Playstation controls lying about on the floor. Curiously, the 10-year-old picked up a control, eager to play, but the teenagers were not going to miss the basketball game. So they led him to believe he was controlling the game.

Every time Shaquille O'Neill made a basket, the big boys pounded Fisseha on the back and yelled their approval, so he wildly pushed the buttons and the game went on. After the game, when Shaq hugged his coach, the big kids told Fisseha he had pushed the button for "hug."

Fisseha goes into the woods, strips bark off the trees, and weaves twine from it, from which he creates bullwhips and slings. He carves little animals and toys from wood. He strips a branch and sharpens it into a spear, with which he can pierce a flying Frisbee and nail it to a tree.

"Mom, look!" he shouted in his deep voice one day, to show me the sling he had woven. He placed a small pebble in it, swung it over his head, released the pebble, and the stone flew like a bullet through our Plexiglas basketball backboard, which shattered.

"Could you go deeper into the woods?" I cried. "Jeez, you could kill somebody with that thing."

One day he ran into the house for a kitchen knife, led Jesse into the woods, and cut and peeled two branches for fishing rods. Back in the house, he asked for thread, then bent straight-pins into fishhooks.

I watched the boys, ages 11 and 10, hike up the sidewalk of our midtown Atlanta neighborhood with fishing rods over their shoulders and apples in their pockets. My thought at that moment: "We've adopted Huckleberry Finn."

At night, this manly boy, who knows how to forage and to fish and to herd goats, who can walk or run 10 miles effortlessly, who is all muscle and sinew, comes down the hall to me with a picture book. "Mom!" he barks. "Story?"

It isn't all happiness. The children get sad sometimes. When Helen first came, she was regularly overcome by grief; perhaps once a week she fought off tears, then surrendered, and collapsed in my arms, sobbing for her late mother. I hugged her and we cried together.

From the first moment, she has treasured having a mother again; she cannot bear for me to cough, or get a cold, or fall down. She has forbidden me to roller-blade with them; seeing her panic and deep distress the last time I tried it (instantly falling down), I put the skates aside, as not worth the grief they caused her.

When Helen first came, she tried to find out if the children around her had parents, as her friends in Ethiopia had not.

After six months in America, Helen stopped asking. She got it: American children have mothers.

This past July, I found myself back in Addis Ababa with my two oldest sons, Seth and Lee, 21 and 18, who both have spent time volunteering there; and we had permission from the foster home to bring Yosef and Daniel to our small hotel. The four guys shared a bedroom so uproariously that the Nigerian United Nations official down the hall had to keep calling the front desk to complain.

After a big day of soccer and swimming and ice cream, Seth steered Yosef, 10, into the bathroom where he turned on the shower, pantomimed what was required, and withdrew.

Yosef showered, then danced back into the hotel room dripping wet and stark naked.

Seth shooed him back into the bathroom and threw a pair of boxer shorts in after him.

Yosef danced back out a moment later, dripping wet, stark naked, and with the boxer shorts on his head.

Lee later said, "These are the two happiest human beings I've ever seen in my life."

Recently a visitor to the boys' foster home interviewed them on tape. "Why do you want to go to America?" she asked Daniel, and the question was translated into Amharic.

He replied in Amharic and an Ethiopian adult translated.

"It is rather sad for us to live in an orphanage. In America we will have a family."

One of my favorite remarks on adoption comes from the writer Sallie Tisdale. She, like many international adoptive parents, copes with people pretending to find her marvelous. "Oh, you've saved these children," people say to me."How grand." "How noble." "You're really so good."

Madonna-watchers seem to feel: "Madonna wants us to feel she's saved this child; that's why she's doing this, to get that credit."

But adoption is not about doing good works. For that, we have volunteer assignments, we have charitable giving. If doing good deeds is what you're after, no trained adoption professional on earth will process your paperwork.