Accessibility links
Huge 'Terror Bird' Fossil Discovered in Patagonia Scientists have found the largest skull of any bird in history. They named it the 'terror bird' for good reason: it was ten feet tall and ate meat. The bird lived about 14 million years ago and the fossil suggests that it was probably pretty agile, and very dangerous. 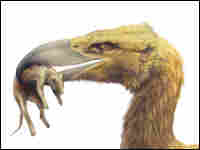 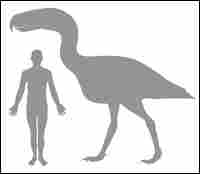 Scientists have discovered a skull belonging to a hook-beaked bird that ruled the grasslands of South America. Scientists are calling the bird a "terror bird."

The bird didn't fly because it didn't have to. Instead, it put its biological resources into growing bigger and faster than anything else on the continent. It was the largest bird ever and the top predator in South America millions of years ago.

Paleontologist Luis Chiappe identified the skull –- the largest on record -– in Argentina. He says this carnivorous bird was ferocious.

"This is not like a crocodile," says Chiappe. "This was a warm-blooded, enormous [and] very-active bird. With the size of the skull, imagine the damage that skull could have done just by hitting something."

The bird is a member of the Phorusrhacid family. Chiappe says there were many types of Phorusrhacids in South America after the dinosaurs became extinct.

The bones of large Phorusrhacids are very rare. Scientists assumed that the large species of terror birds were bulky versions of other types of Phorusrhacid.

Chiappe says this skull, along with a slender leg-bone at the site, suggest something bigger -- but also much different.

"We are challenging the traditional view that these birds, as they grew bigger, they became less agile," he says.

Instead, Chiappe's Nature article explains that the terror birds were probably greyhound-quick.

That quickness gave them an advantage. American Museum of Natural History paleontologist John Flynn notes South America was an island at the time, where animals evolved differently.

"There were very limited numbers of predators," Flynn says. "Most of the mammalian predators [in South America] were a kind of dog and a lion-like marsupial."

Though other large predators existed at the time, none had the speed and agility that are suggested by the terror bird bones. The many grazing animals of South America provided ample prey for the terror birds, who climbed to the top of the food chain.

Flynn says they remind him of their very successful predecessors.

"It's really interesting because they do resemble -- at least in a crude way -- the predatory dinosaurs like the Tyrannosaurus Rex that had gigantic heads, very small forelimbs and very long legs," he says. "They've got that same kind of meat-eater adaptation and they obviously did very well [because] they persisted for tens of millions of years."

The terror birds died out about two million years ago, around the time that North and South America merged at the Isthmus of Panama. Flynn notes that climate change could have contributed to the birds' extinction. Or perhaps another predator even more terrible drove the birds to extinction.