Accessibility links
'Four Kinds of Rain': A Hapless Hero's Noir Heist Tale The sad-sack central character of Robert Ward's latest novel is the anti-hero of a darkly comic story of love and crime, who falls in love with a woman who knows a loser when she sees one. He sets out to win her affections with a heist gone bad... 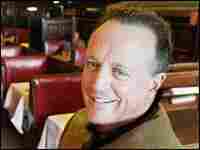 Scroll down to read an excerpt from Robert Ward's latest novel, detailing a very lousy way to start a day...

It's a freezing winter night in Baltimore when we meet Bob Wells, the hapless hero of Robert Ward's novel, Four Kinds of Rain. Bob's soused on vodka and about to be kicked in the groin by the crazy homeless man he's been trying to help. It's equal parts metaphor for Bob's screwed-up life, and roadmap for the darkly comic story to come.

Bob's a middle-aged shrink with a shrinking practice. He's been dumped by his wife, he's gambled away his life savings and could use a few hours on the couch himself. His only pleasure in life is playing lead guitar with the Rockaholics, a bar band. They're on stage when Bob gets the bad news: Their singing stinks, the patrons are bored and the Rockaholics are about to get the boot.

Then, in classic noir style, in walks the blonde. The dame. Jesse. In just three sentences, we see Bob fall madly -- and mad is the operative term here -- in love.

The front door opened and a very wet woman came hustling in out of the rain. Bob looked up and felt something happening in his chest. Jesus, she was something... She had thick blonde hair and the most beautiful, sensual lips. And her skin... He hadn't seen anything like it before. It was soft and white and her nostrils flared a little, and her eyes, Christ, he'd never seen eyes like those, ever. They were small and almond-shaped and green -- they seemed to hold a secret, or a promise.

If Jesse's eyes hold either, Bob is never going to find out. He's broke, and Jesse won't date losers. Bob's nothing if not desperate, so he hatches a plan steal an ancient, jewel-encrusted mask from one of his few remaining patients. The scheme goes haywire, of course, and Bob tumbles down a one-way rabbit hole of larceny, betrayal and murder.

Four Kinds of Rain is almost old-fashioned in its plot and pacing. Ward, who won the PEN West prize for Best Novel for his working-man novel Red Baker, went on to write TV shows like the often-sublime Hill Street Blues and the sometimes ridiculous Miami Vice.

If you like stories told from an ironic remove, you've picked the wrong writer. Whether his characters are punch-drunk, sucker-punched or just plain suckered, Ward makes sure we feel it all. In fact, the book is occasionally violent enough that, for the gentler souls among us, skimming rather than reading is a temptation. You'll miss the blood and gore, sure, but you'll also miss the terrific writing that makes this book fly by.

It's doubtful you'll like Bob Wells any more on the last page of Four Kinds of Rain than you did on the first. Robert Ward, however, is sure to keep you up way past your bedtime. 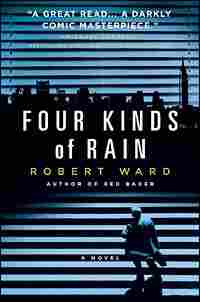 Even after three vodkas and an Ambien, it had taken Bob Wells two hours to fall asleep. Now he lay in his bed dreaming that he was running through a maze of dark city streets, while sharp little stilettos of ice stuck in his chest. Somewhere ahead of him in the gathering dark, a voice screamed, "Terrorists. Terrorists... they're coming! The terrorists!" He knew that panicky voice so well, knew it nearly as well as he knew his own. He turned a dream corner and saw the screamer laying there, near a battered old phone booth, his sore-covered head hanging in the gutter.

Bob Wells woke up with a start. There it was again. The panic dream of ice rain. A lethal injection that fell from the night sky, accompanied by a high-pitched scream, the same scream he could hear for real now, somewhere out there on the wet city streets.

He got out of bed, went to his bedroom window, and with some effort pushed it up. The cold wind and sleet blew in from the harbor. Bob stuck his head out into the night and looked down the far end of Aliceanna Street. The homeless guy was there, just as he'd been the night before, the guy everybody called 911, lying in the gutter, right next to the battered and windowless telephone booth. Loaded on rotgut and crack, he held his wine bottle in the air and screamed: "Here they come! The terrorists! They're in the air! They're here! Terrorists! Terrorists!"

He listened to 911 rave, his hysterical voice cutting through Bob's rapidly beating heart. Finally, he shut the window, sighed, took off his sweat-soaked pajama top, quickly threw on his old wool crewneck sweater, and reached for his black Levi's.

Bob buttoned his old navy Pea Jacket against the sleet as he headed down the slippery street. He was ten feet away when the terrified, wide-eyed, filthy man looked up at him.

"Nah, Nine," Bob said. "No terrorists, man. It's just me. Bob." The drunken, panicked wreck looked at him through rheumy eyes.

"Right," Bob said. "So, if they are coming, maybe the smart thing to do would be to get off the street?"

911 bit his scabby lower lip and looked at Bob in a cagey way.

"So you might think," he said. "But then again, maybe that's exactly what they want me to do. After I get to the shelter, boom, the death strike hits there."

"'Cause I talked to your people just a few minutes ago and they told me that tonight is just a street action. Anybody in the shelter is safe, Nine. Okay?"

"Also it's cold and wet out here," Bob said, looking up at the sky. "You could get real sick and then you'd be playing right into their hands."

From beneath the street grime, 911 assumed a thoughtful stare.

"Of course they would," Bob said. "Hey, the thing is, I gotta go to St. Mary's shelter right down on Broadway, so maybe you'd like to keep me company, huh?"

"Like riding shotgun on the stagecoach to Dodge," 911 said.

"Maybe we should go now, before they come," 911 said. Like he'd just thought of it. Like he was taking care of Bob.

As 911 tried to unfold his bones from the street, Bob gently took his arm, a mistake he wouldn't have made earlier in the night, when he was less wasted.

911 pulled away quickly and kicked Bob squarely in the balls. Stunned, Bob went down on his knees, groaning and holding his crotch, as the homeless man scuttled away.

Bob fell over on his side as the pain shot through his stomach and lodged somewhere near his Adam's apple. He lay there and it occurred to him, for maybe the hundredth time that day, that he seriously needed out of this s***. Up, up and away, like forever, for good. No more, baby. No more friend of the friendless. No more poor folks. No more 911s.

As the burning pain subsided, Bob Wells entertained a small, almost funny thought. If any of his neighbors looked out their windows just now, they'd see him there and think, Look at the poor, homeless son of a bitch out in this s***. Pathetic.

From Four Kinds of Rain by Robert Ward. Copyright (c) 2006 by the author and reprinted by permission of St. Martin's Minotaur. 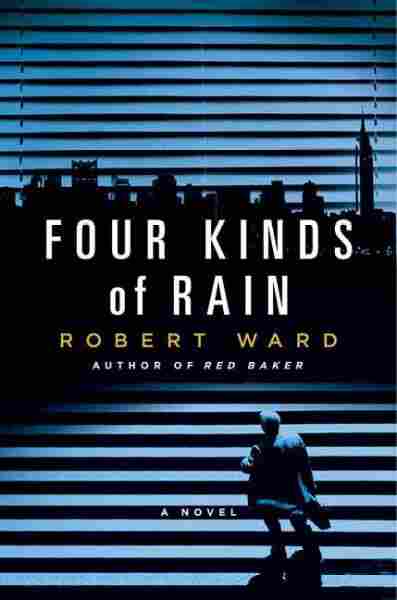