Accessibility links
A Powerful Look at an Imaginary Tragedy Okkervil River takes on a daunting challenge in a new song making the rounds as an MP3 download: It looks at the impact of a horrific event — in this case a presidential assassination — that hasn't actually taken place.

A Powerful Look at an Imaginary Tragedy

A Powerful Look at an Imaginary Tragedy

'The President's Dead' by Okkervil River 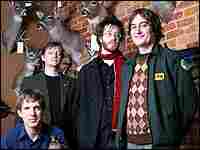 Huge, world-changing tragedies trip up a lot of songwriters: It's easy to become didactic or mawkish when faced with the task of condensing widespread horror into a single song. As a general rule, the best results come when composers take a major moment in history and write on as small a scale as possible. Bruce Springsteen, for example, wrote possibly the greatest Sept. 11 song of all in the wrenching "You're Missing," a look at one eerie absence and its effect on a household. The song clearly addressed the aftermath of Sept. 11, but with only a few minor revisions, it could also have been about any sudden departure, the result of a fatal heart attack or a fateful late-night argument.

Okkervil River takes on an even more daunting challenge in "The President's Dead": It looks at the impact of a horrific event — in this case a presidential assassination — that hasn't actually taken place. Of course, it's easy to place the song in a contemporary context, but "The President's Dead" isn't about George W. Bush at all. Instead, it takes fewer than three minutes to thoroughly examine the way a national tragedy shapes the way we look at our own lives. Singing in a characteristically uneasy warble, Will Sheff touches on everything from ambivalence over the (fictional) president himself to future memories of the way "there was spring on the wind" the day he died.

In listening to the song unfold again and again, it's fascinating to hear how open to interpretation it is: It looks at our unseemly solipsism — the way we view tragedies through the lens of where we were when they took place. It's a vivid work of fiction, complete with a lesson about being thankful for the modest rewards of modern existence. It's a study of how one life dwarfs another, and of how our criticisms of a public figure must be washed away when he or she meets a tragic end. Conceptually daring and hypnotically paced, "The President's Dead" demands close study, as if it were the Zapruder film itself.