Accessibility links
Blogs Capture, Amplify Gallaudet Protest At Washington's Gallaudet University, the nation's only liberal arts school for the deaf, protests against the woman picked to lead the university, Jane Fernandes. Gallaudet officials expected the demonstrations to die down, but bloggers are keeping the issue alive.

Gallaudet protesters and university representatives are both using the blogs to promote their agenda and rally support.

Scroll down to read samples from the blogosphere and profiles of the people behind the blogs. 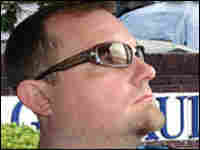 MELISSA BLOCK, host: In Washington, at Gallaudet University, the nation's only liberal arts school for the deaf, many students, faculty and alumni continue their protests against Jane Fernandes. She's the woman chosen to be the school's next president. She's deaf, but some protesters don't like that she grew up speaking and reading lips, before she learned sign language. Others resent the tough decisions she's made as a long-time administrator. Officials at Gallaudet expected the protest to die down. To understand why it keeps growing, NPR's Joseph Shapiro says it helps to see the protest as a bloggers' revolution:

JOSEPH SHAPIRO, reporter: Ricky Taylor has become pretty famous among deaf people. They know him as Ridor. The blogger. Who boasts on his popular Web site -- RidorLive.com -- that he is "arguably the most controversial Deaf blogger in America."

RICKY TAYLOR: People say I'm a journalist. But no, I'm not that. That's not my goal to be a journalist. My intention is to provide the facts but also enjoyment.

SHAPIRO: At Gallaudet, where protests have disrupted campus for three weeks, the man known as Ridor signs. An interpreter speaks:

TAYLOR: And I try to keep my blogging exciting and lively.

SHAPIRO: Taylor's blog is certainly lively. It's angry. It's opinionated. And it's full of attitude. Just like the protests.

TAYLOR: We can speak for ourselves. Blogging is something where we can take advantage of the spur of the moment and express our point of view.

SHAPIRO: Protesters demanding the resignation of the new president at Gallaudet get much of their information from Taylor and dozens of other deaf bloggers. Deaf people rely heavily on e-mail and the Web.

When the protests started, Taylor was a cheerleader and often an agitator. Now, when Gallaudet staff want to leak some piece of information critical of the school's administration, it's likely to end up on RidorLive.

Taylor's a Gallaudet graduate. He says the protesters trust the deaf bloggers. But not the mainstream media.

TAYLOR: Now media, radio, television, the news, newspapers … tell me one person, deaf person, who works as a writer, journalist or editor. Can you tell me one? So their perspective is different than our point of view.

SHAPIRO: The media cover the protests, but off and on. Bloggers like Elisa Abenchuchan cover it day and night, seven days a week. She speaks through an interpreter:

ELISA ABENCHUCAN: I feel like I'm just reporting on what happened. Providing information.

SHAPIRO: Abenchucan got a graduate degree last spring. Now she spends days in Tent City, the encampment of protesters at the school's front gate. In exact detail, her blog summarizes speeches at nightly protest rallies.

ABENCHUCAN: I do put in my own opinion here and there. But I try not to do it too much. I feel there are enough people out there putting their opinions out there. But with recent events, I've felt frustrated and emotionally involved.

SHAPIRO: The recent event she's referring to is the arrest of 133 Gallaudet protesters earlier this month. They'd blocked every entrance to the campus, and shut down the school for three days.

Gallaudet administrators called in special Washington police -- ones who used sign language. And then spent two days patiently negotiating with students about how the arrests would take place.

To Gallaudet administrators, this showed they'd bent over backwards to reach out to the protesters. But you won't find any of that in the deaf blogs. Instead, the arrests are bitterly depicted as a moment when deaf administrators betrayed their own deaf students.

Those blogs -- including one that carried a kind of play-by-play of the arrests -- were read by deaf people around the world.

SHAPIRO: People like John Egbert, from Minnesota. He read RidorLive and Elisa Writes, then got on a plane and came to Washington to support the protests. He's 59. Went to Gallaudet in the 1960s.

He speaks with his own voice.

EGBERT: I watch the blogs, three to four hours a day and they really keep me up to date.

SHAPIRO: Egbert joined students, faculty and alumni who rallied over the weekend -- a couple thousand of them at this university of only 1,700 students.

The protests at Gallaudet University have spilled over into the blogosphere. Most of the blogs support the students, faculty and alumni who object to the appointment of Jane K. Fernandes as president of the school for the deaf. But there is a range of opinion. The online chat forum alldeaf, for example, has threads debating the issues behind the protest. Here is a sampling of the blogs.

POV: Y-three supports the protests and wants Fernandes to resign. But its blogger-in-chief, Gallaudet alum Tayler Mayer, says he is "a strong believer in freedom of speech." So he developed DeafRead.com, a blog aggregator for issues concerning the deaf community, where all views on the protest are published -- even those from Gallaudet's official blog.

FYI: Y-three is the official blog of TaylerInfomedia, a Web development company started by Mayer, who provides technical assistance to other blogs representing the deaf community.

POV: Gallaudet grad Ricky D. Taylor, who says he is "arguably the most controversial deaf blogger in America," participates in protest activities and makes no attempt to hide his frustration with Fernandes' appointment.

FYI: Since the protests began, RidorLive.com's traffic has nearly quadrupled, says Taylor. The blog's name is actually an acronym of his name: Ricky D. Taylor.

Sample post: "Then there was a vote which Fernandes suggested the students [in her first-year seminar] to vote, the vote was to eject her as the instructor. If she cannot control 15 students, what makes you think she can control 1,800 students at Gallaudet?"

POV: Entrenched with the protesters in their "tent-city" at the school's front gate, '06 grad Elisa Abuchuchan blogs about events as they happen. She says, "I personally support the protest but I try to present more factual information rather than my opinions."

FYI: Abuchuchan, a '06 graduate, has been blogging since the protests began on May 1. On some days, she posts 10 updates or more.

FYI: 9th Prez also contains information on Gallaudet's presidential appointment process, Fernandes' track record and her vision for the future of the university.

Sample post: "Much of what has been written and offered up on many of the Web sites and blog sites that have sprung up in response to the series of events associated with the presidential transition at Gallaudet University has often been confusing, emotional, erroneous, fictional, and sometimes mean and hateful."