Accessibility links
American Slang, Adapted and Updated What's a "blurker"? Or a "pavement princess"? Or a "plokta"? What does "peeps" mean? Writer Paul Dickson knows. A confessed addict to collecting and identifying slang words, Dickson has written a new and updated dictionary of American slang.

What's a "blurker"? Or a "pavement princess"? Or a "plokta"? What does "peeps" mean? Writer Paul Dickson knows. A confessed addict to collecting and identifying slang words, Dickson has written a new and updated dictionary of American slang.

From NPR News this is ALL THINGS CONSIDERED. I'm Robert Siegel.

And I'm going to try and keep this next intro short so we can hit the post, fit in the web back and avoid busting the segment. You may not be able to decipher that radio slang but there's a guy who makes it his mission to do just that. Not just radio slang, but also sports slang, hip hop slang, war slang and real estate slang.

His name is Paul Dickson and he's the author of many books on American English. Among them, his Dictionary of Slang, which is now out in its third updated edition. Paul Dickson collects slang like others collect baseball cards or vintage cookie jars, with extreme passion.

Mr. PAUL DICKSON: It's a wonderful hobby because you don't do any trespass. Its not like you're collecting birds eggs or — it's there and it's there for the taking and the fun of it is just sort of decoding what other people are saying.

BLOCK: So if you meet somebody from a subculture, you'll be asking them, give me your lingo, what have you got?

Mr. DICKSON: Well it's hard to do that. I remember one time I asked somebody from a newspaper about the lingo and the jargon and the slang in the newspaper and they said absolutely not. There's no such thing. And the woman I'd said that to about two hours later called back and said you know, I was just in the sitting room and we were having lunch and I told them what I said to you. Then all of a sudden the terms kept flying out of their mouths. I mean calling a newspaper article a piece. I got a piece due this morning or led for the lead to a story and etcetera, etcetera. There's hundred of them. At the first blush, most people don't realize they're using slang and so I'm looking and talking into a mike sock, which is to prevent me from using (unintelligible).

BLOCK: Right now, at this moment.

BLOCK: Do we call that a mike sock, Stu? Popper Stuffer.

BLOCK: Popper Stuffer. Add that to your next edition.

Mr. DICKSON: I'm writing, the pen is out.

BLOCK: Write it down.

Mr. DICKSON: I will. I wrote Popper Stuffer. I love that.

BLOCK: I was looking your chapter, you've organized these terms by topic or by sub group and I was looking in your section on auction terms.

Mr. DICKSON: eBaysian, some people call it. The new online auctions have some wonderful terms, one of my favorites is pinks. On any eBay if you are in a discussion group on eBay or there is something going on, eBay employees will occasionally chime in when they'll see something that they like or don't like. And they're called pink because the little dialogue box is pink, but what makes it a beautiful piece of slang is that it's reminiscent of Pinkerton, you know, the old private detective.

Mr. DICKSON: People are going to go to their computers. There are people out there, and nobody knows who or why they do this, but apparently they will take a picture of a vase or something that's on eBay that's reflective or a hubcap or something. They will do it without any clothes on and I guess the reason, more than just naked, is because most of these things distort them like funhouse mirrors.

BLOCK: So some naked image reflected in something shiny.

BLOCK: And there's a word for it.

BLOCK: Naturally. The violatility of slang - let's keep you on your toes. When you're revising your book like you are, you're throwing some words out right?

Mr. DICKSON: Oh yeah, I'm throwing categories out. I mean this is the third time out with this book and they've been about 10 years apart, and whole new categories come in that weren't there before. Things like hip hop and java speak which was sort of Starbucks and that whole business. But one I love is the language of the modern office, which is called a cube farm. So.

BLOCK: What would be a category that you've gotten rid of completely.

Mr. DICKSON: I've gotten rid of the counter culture, the ‘50s, the ‘60s, the early drug culture. It's now become so much part of the language that it's now standard language. So bummer, or a trip, that counter culture of do your own thing, all that stuff has now become standard English. Even hip hop, there's 70 hip hop terms are now in the Oxford English Dictionary.

BLOCK: One of the words in your section on hip hop speak is the word grills.

BLOCK: And we have a song here, this is a song Grills by the rapper Nelly. Let's take a little listen.

NELLY (Musician): (Singing) I got like platinum and white, most traditional gold. I'm changing grills everyday like they change clothes. I might be grilled out nicely in my white T on South Beach in my wife beater. VV and (unintelligible) you can see my grandma might hate it but my little momma love it.

BLOCK: So Nelly, they're talking about being tricked out in his grills. Translate for us Paul.

Mr. DICKSON: Grills are now the, were teeth originally, but then they became these golden and diamond studded teeth a lot of the rappers are wearing. The VV in there, there is one point where he refers to VV, and that refers to clarity and it's a nickname for diamonds because VV is a rating for the clarity of diamonds. Of course the other one in there is wife beater, which is the male sort of tank top undershirt with a straps. What's interesting about that is it goes back to, the original allusion which that came from was when Marlin Brando in Streetcar Named Desire when he wore that sort of.

Mr. DICKSON: Stella and he's slapping her around and so from then on that male undershirt without the arms was called a wife beater. The interesting thing for me to do is, I'm 67 years old and I'm trying, I'm basically trying to learn what all this hip hop language was and it's fascinating because it's like any other jargon or slang, it's just a question of decoding and finding context and then finding other examples and writing about it.

BLOCK: I was thinking that in the time that it took you to write the hip hop chapter and get it published, probably half those words have already fallen out of favor because they are totally passé.

Mr. DICKSON: Oh, yeah, and there's a thing they call in linguistics or it's a positive called the Couric factor, which is once a mainstream talk show host explains the term to his or her audience.

BLOCK: We call the Siegel factor.

Mr. DICKSON: That's right. Once it's explained on mass media then it becomes, it's gone. My favorite moment came when def, which was rap, hip hop for something that was good.

Mr. DICKSON: D-E-F, def. When it was accepted, it was the first rap term or hip hop term that went into the OED and when that happened they had a burial, a funeral service for it on BET, Black Entertainment Television, and the Reverend Al Sharpton officiated at the funeral and it was such a tremendous moment in the history of slang. There are these moments when all of a sudden, the people take it so seriously that somebody has to stand up and actually bury a word because it's now so mainstream.

BLOCK: As someone who has so fondly collected slang over many, many years, do you think this is a especially furtile time or do you look back on the ‘20s and ‘30s and say, boy, that was really the golden age of slang.

Mr. DICKSON: It's hard to say. I think they're all golden ages but I think if you looked at it pure and simply that we lost certain slangs. The lumberjacks and the carnival people. They're still there but they're now a minor voice, but we're creating new ones everyday. You know, pizza delivery has a huge slang.

Mr. DICKSON: Pizza delivery, yeah. That's one I've just started to look into, but any endeavor in which things are sort of fast moving and there are a lot of people involved would be subject to slang.

BLOCK: Paul Dickson, thanks for coming in and sharing your enthusiasm for slang with us.

SIEGEL: And for a crash course in cube speak, you can check out our Web site, NPR.org.

Overheard at the Water Cooler (in Cube-Speak)

A very bad play in (mercifully) one act, otherwise known as a crash course in cube-speak. Two colleagues in an office somewhere in America take a water-cooler break.

In a chapter from his book Slang: The Topical Dictionary of Americanisms Paul Dickson collects and defines key phrases from modern America's office culture, such as those used below. (Already confused? Click here to read with translations.)

Britney: Boy, I needed a break from the cube farm.

Kevin: No kidding! Did you catch the prairie-dogging when Caitlin's coffee-maker exploded?

Britney: At least it provided a little drama to a morning when I was definitely glazing. Although did you get that weird e-mail that was being forwarded around?

Kevin: No, I think the digital hygienist struck again.

Britney: What are you working on?

Kevin: Oh man, I need to get granular on the latest fire drill.

Britney: Yeah, Irving is such a seagull manager. It's like, you gotta have triorities with that guy. I can't believe how long the obfun lasted yesterday, as if we didn't already have enough to do.

Kevin: At least they served lunch. Did you see Tiffany's canfusion?

Britney: Yeah, and the catering vultures lurking in the hallway? Don't those people have any shame?

Kevin: Anyway, there was a cloud of bozone in that room. Where are all our idea hamsters?

Britney: I think they realized working here was a big fat wombat.

Kevin: Amen to that. Well, I guess I better get back to my cube. Nice facemailing with you.

Britney: Excuse me, my cell is vibrating.

Britney and Kevin exit, stage left. Irving emerges from the shadows by the water cooler. He is their boss.

Irving: Darn those young people. I didn't understand a word they said! 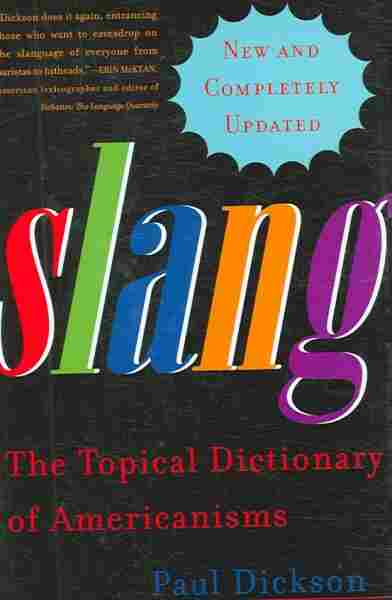 The Topical Dictionary of Americanisms