Accessibility links
New Options for Soothing Arthritis Pain Osteoarthritis is one of the nation's leading causes of disability, affecting approximately 20 million adults. There's no cure, but there are new treatments for easing pain, such as a lubricating fluid and an implant that cushions joints. 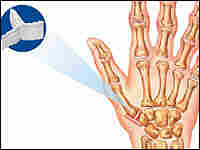 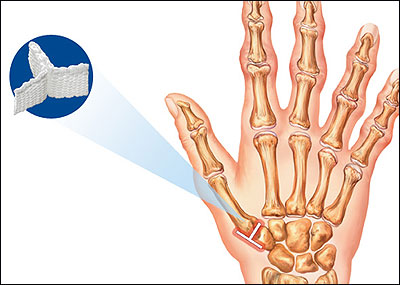 A T-shaped implant inserted between two bones can act like cushioning cartilage in an arthritic thumb joint.

Which Type of Arthritis?

Both cause joint pain, but the causes and treatments are quite different. Here, a few ways your doctor can help you determine what is causing your aching joints:

A person with rheumatoid arthritis often has more symptoms than joint pain. They may have fever, weight loss, appetite loss and weakness. Pain is often symmetrical, the same on both sides of the body.

A person with osteoarthritis may be otherwise quite well except for a few painful joints.

With rheumatoid arthritis, the doctor sees evidence of inflammation in the joint itself and soft tissues are very swollen and tender. That's not the case with osteoarthritis; the doctor doesn't see soft tissue swelling.

Blood tests show evidence of inflammation. For example, a test called "anti-CCP" is positive for the production of certain antibodies in patients with rheumatoid arthritis.

Blood tests show no evidence of inflammation with a case of osteoarthritis. — Erika Engelhaupt

Osteoarthritis has become one of the nation's leading causes of disability, affecting approximately 20 million adults. There's no cure, but there are many treatments that can ease the pain.

Katie Cohen, 52, always took her thumbs for granted until the pain of osteoarthritis set in.

"I learned to use my two fingers instead of my thumb," Cohen says. This helped her get by temporarily, but after trying a splint and steroid injections, Cohen opted for a new surgical procedure.

During a one-hour outpatient procedure, hand surgeon Terrence O'Donovan of Glen Burnie, Md., made a small incision near the base of Cohen's thumb. He then implanted a T-shaped "spacer" where the two bones in the thumb joint come together. The spacer is made of "Artelon," which is a degradable polyurethane material that looks like woven fibers. O'Donovan anchored the implant to the bone with screws.

"The key here," O'Donovan says, is getting the "bone off the bone."

He explains that the pain of arthritis creeps in when the cartilage that separates the bones wears out. The surgically implanted spacer, manufactured by a Swedish company called Artimplant, serves as a replacement. The Artelon material is like graft material, says O'Donovan.

"This means the body can attach to it. And over time, the body will eat it up and (it will) be replaced by the body's own tissue," he says.

Since 2004, O'Donovan has performed about 40 thumb-implant procedures using the Artimplant spacer. He hasn't measured any new tissue growth in his patients, so he can't be certain that new tissue has grown. Artimplant has some evidence from biopsies that document the growth of a building block of cartilage, but not of cartilage itself.

Donovan says he focuses on the benefits he can measure in his patients. In the short-term, up to two years after surgery, his patients have all experienced significant reduction in pain, he says.

One published study comparing the Artimplant procedure to a more invasive alternative surgery that removes a thumb bone found that the Artelon implant leaves patients with greater grip and pinch strength.

"I can grab anything, hold anything, squeeze anything," Cohen says, naming actions that were once very painful for her. She says that repetitive tasks -- such as stapling a lot of papers in a short time -- can still lead to soreness. But Cohen says it's manageable.

With her thumb repaired, Cohen has begun to focus on the pain in her arthritic knee. Currently, she's trying an alternative to surgery: injections of a viscous fluid called hylan, marketed under the name Hyalgan. It's made from a derivative of hyaluronic acid, a natural acid produced in the body.

In the last few years, Hyalgan, as well as a similar product called Synvisc, have shown to be fairly effective in halting pain, says orthopedic surgeon Marc Connell of Chevy Chase, Md.

"Essentially, what these products do is act as a joint lubricant to decrease friction inside the joint, to allow the joint to function more normally and hurt less," says Connell.

A Cochrane Collaboration review of the studies conducted on injections based on hyaluronic acid found that they offer significant pain relief when compared with placebo. The review also found evidence that the effects of the hylan injections are longer-lasting than steroid injections. But rarely does the effect last beyond two years. One reason is that the injected fluid drains from the joint.

In the long-term, surgeon Marc Connell says, many of his patients do ultimately opt for surgery.