Accessibility links
The Border Fence: Welcomed in Yuma, Ariz. President Bush signed a bill Thursday authorizing the construction of a security fence along the U.S.-Mexico border from California to Arizona. The Arizona city of Yuma is along the route, and is a major crossing point between the two nations. Yuma Mayor Larry Nelson is in favor of the fence, saying illegal immigration is having a negative economic impact on his city.

President Bush signed a bill Thursday authorizing the construction of a security fence along the U.S.-Mexico border from California to Arizona. The Arizona city of Yuma is along the route, and is a major crossing point between the two nations. Yuma Mayor Larry Nelson is in favor of the fence, saying illegal immigration is having a negative economic impact on his city. 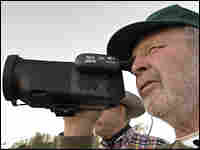 Minuteman Ron Pendleton of Tucson, Ariz., looks through a $15,000 Infrared night scope from the Arizona Minuteman base camp on the King Ranch in Three Points, Ariz., on Oct. 10, 2006. Gary Williams/Getty Images hide caption 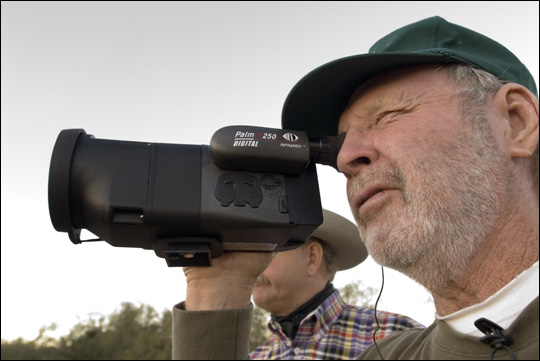 Minuteman Ron Pendleton of Tucson, Ariz., looks through a $15,000 Infrared night scope from the Arizona Minuteman base camp on the King Ranch in Three Points, Ariz., on Oct. 10, 2006.

From the studios of NPR West, this is DAY TO DAY. I'm Alex Chadwick.

Coming up: a top Iraqi leader tells DAY TO DAY that the most dangerous militia in Iraq has renounced violence.

CHADWICK: First, illegal immigrations. President Bush today signed into law the Secure Fence Act of 2006. This is for 700 miles of reinforced fencing and barriers and infrared cameras aimed at stopping illegal immigration across the U.S.-Mexico border.

BRAND: This barrier is expected to extend from the eastern border of California through to the town of Douglas, Arizona, near New Mexico. We'll hear from the mayor of Douglas in a moment.

CHADWICK: The town of Yuma, Arizona is also on that border. I spoke earlier with Yuma's mayor Larry Nelson.

Mr. LARRY NELSON (Mayor, Yuma, Arizona): We see a lot of those that are trying to get the jobs throughout the United States, coming through here. A lot of them come into what we call stash houses, and there will be as many as 150 in a 1600 square foot home.

CHADWICK: How many people do you think are coming across the border right there in your area, every day?

Mayor NELSON: Well, the numbers last year the border patrol had was about close to 140,000.

CHADWICK: One hundred and forty thousand a year, but not right in your area.

CHADWICK: You already are working on a fence just right there near the city?

Mayor NELSON: The National Guard has been here, and the Marine Reserve's been here for almost two years now. And these are the guys that take two weeks active duty, and so they came here on their active duty and they were building these fences as part of that training process.

CHADWICK: And how's it working for you?

Mayor NELSON: Very well. In fact, the additional guardsmen that are here and we had - the last count I had was about 600 - and those are additional eyes and ears. They spread out along the border. Two of them are watching, binoculars all the time.

CHADWICK: As I've heard this fence described, in fact, it might be something like that, not necessarily a physical fence for all 700 miles, but it might be kind of a surveillance, and radar, and all kinds of different techniques.

Do you actually want a physical fence? And the kind of physical fence that the border patrol's been talking about is a little different from what you have there in your town. It's a double fence with a road between it. Do you want one of those?

Mayor NELSON: It's a triple fence. In the areas of high population, we definitely want them. Where you have high population in there - They're coming over into San Luis, Arizona which is right on the border, we've caught people in the backyards of the houses of people trying to go through and they're tired of it. You know, they'll come through. They'll take their food. They'll go right in the house, and there's a threat there.

You know, all these people aren't real good people.

CHADWICK: How close is the fence to getting completed, the one that you're having built there?

Mayor NELSON: Oh, it's a long ways away. Right now it has not even covered all of the line down in San Luis, Arizona. The other thing they're building in there besides the great big tall fence is what they call bollards and they're there as a vehicle deterrent.

Right now, along most of the border down there, Highway 2 - which runs parallel to the United States border in Mexico - is less than half a mile away from the border. And you just - they can turn off from that and drive right into the United States. There's no - not even a barbed-wire fence.

CHADWICK: There's a term that you used when you talked to a producer here on our program earlier: OTM.

Mayor NELSON: OTM. That's a standard designation, and that's Other Than Mexican. There's close to 3000 of those a year and they're coming from Pakistan, from Iraq, from Iran, from China. From all other nations, even in the Mideast. So those can be very scary, some of them.

Mayor Nelson, thank you for speaking with us on DAY TO DAY.