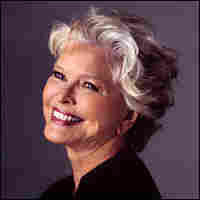 In 1974, Ellen Burstyn won an Academy Award for her role in Martin Scorsese's Alice Doesn't Live Here Anymore. In it, Burstyn portrays Alice Hyatt, who hits the road in search of her future after her husband's death.

When it comes to depicting sorrow and searching, Burstyn has a natural advantage: She has lived it.

Burstyn's memoir, Lessons in Becoming Myself, is about her journey, both professionally and spiritually. She examines her career, which spans five decades on stage, television and film, and her troubled family life: an undermining mother, an absent father, transitory stepfathers and broken marriages -- her last to a man who became psychotic.

Excerpt: 'Lessons in Becoming Myself' 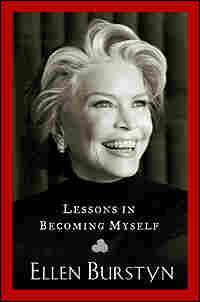 Down in the basement of my house, there is a room where I store my archives: every script I've ever worked on, photos taken of me and photos I've taken, diaries, journals, appointment books, calendars, and notebooks from all the way back to my beginnings.

But that is only the outer room. There is an inner room where I store my feelings. I was blessed with a good memory. John Gielgud once said to me, "Memory is like any muscle. It must be exercised." I have trained my memory and I exercise it often. When I need to access a particular emotion for a role, I imagine taking an elevator down to my inner archive, where I quietly flip through the files until some memory rises up and offers itself. Then I move into that event and it comes alive in me.

In ancient Greece, the goddess of memory was called Mnemosyne. She was a Titaness who married Zeus and then gave birth to the nine Muses. So memory is the mother of inspiration. I call on her every day in my work, then ride her titanic force down into the past, where sleeps my whole life waiting to be called forth.

Detroit, 1935. I'm two and a half years old. My brother Jack is five. We live with my mother and her second husband, Don Francimore, whom I call Daddy. My name is Edna Rae Gillooly. I don't know my real father, John Austin Gillooly, very well. We are in our apartment. Something is wrong. My brother got sick and is in the hospital. My grandmother takes care of me during the day while my mother is at the hospital with Jack. My mother is very sad. My aunts and uncles have come over to see her. I'm in the bathroom. I can hear my mother telling everyone that Jack has scarlet fever. I want my mother to stop crying. I want to make her laugh. I'm naked. I take a white washcloth and put it between my legs like a sanitary napkin, holding it in place with one hand in front and one in back. I prance out of the bathroom and into the living room as though riding a hobbyhorse, chanting, "I'm Mommy, I'm Mommy." Nobody thinks it's funny. I get ushered back into the bathroom and into my pajamas. Everyone leaves. I'm put to bed on the couch. My grandma is in the bed I usually share with Jack. My mother sits in her rocking chair sadly knitting. I watch her for a while, but the creak of her chair and the click-click of her knitting needles lulls me to sleep. In the morning I'm in the kitchen eating my cereal. My mother comes in and tells my grandma that a bird got trapped between the walls.

She could hear it flapping its wings all night.

My brother's been in the hospital for two weeks. He has double pneumonia and a mastoid infection. My mother is crying a lot; she can't sleep and rocks and knits all night. Every once in a while she murmurs, "That poor little bird is still trapped in the wall. I can hear it flapping." One night she says, "The bird is getting weaker," and she rocks faster, her knitting needles clicking and her face looking tight and strained.

The next night she comes home and tells my grandma that Jackie isn't going to last the night. She says, "The doctor said there is a new drug that has been successful in the laboratory, but they haven't tried it yet on people. He asked for my permission to try it out on Jackie. I said, 'Well, if he's not going to last the night, go ahead and try it.'"

My grandma tucks me in on the couch. All the lights are out except the lamp near my mother's rocking chair. I drift off. Suddenly the chair stops creaking. I open my eyes and see my mother leaning forward, the lamp and a soft smile lighting up her face. She says in a hushed voice to the silent room, "The flapping has stopped. The bird got out. Jackie is going to be all right."

I don't know what kind of magic was at work there, but it was a kind my mother clearly understood. It made a deep impression on me. That drug was pretty impressive, too. It was sulfa. It cured Jack's scarlet fever and the double pneumonia, but when it came to the mastoids, its power fell on deaf ears. My brother was hearing-impaired for life.

Writing this earliest of memories makes me wonder if it wasn't right here that I became intrigued with the third world of our existence. The first world is the world of light, where we see, hear, taste, touch with our senses, and understand with our rational minds. Its opposite is the dark world of death, where we are without even our very breath. But between these two realms there seems to be a third world -- a mysterious dimension where a little bird can get caught and flap a fevered message with its scarlet-colored wings to a worried rocking mother knitting her son's return to the land of life.

My mother was very proud of me. She took me to ballet, tap dancing, and acrobatic lessons. When family or friends came over, the rug was rolled back and I was urged to show off my latest steps. My mother made my clothes and dressed me up like a doll. People would say one of two things: "She looks like a doll" or "She looks just like you, Coriene." Either remark would make my mother expand with pride.

But I wasn't a doll at all. I had feelings dolls weren't supposed to have. Not even little girls were supposed to have them. I liked boys, a lot, and they liked me, too.

One day I stayed with my grandfather while my mother went shopping with my grandmother. He was a gruff man, but of his five children my mother, the beauty, was his favorite and her little doll child was the apple of his eye. He let me go outside to play, but cautioned me not to stray from the house. There was a neighborhood boy my age who came over to play. I can't recall his name or his face, only that I felt attracted to him. On the front porch was a metal glider painted green. This boy and I turned the heavy glider around so that its back faced the street and we could squinch down on the cushions and play our dangerous game. The game entailed me slowly lifting my skirt until a patch of white underpanties showed at the top of my legs and then quickly covering them again as the two of us giggled conspiratorially. He seemed absolutely fascinated by this flash of white cotton beneath my skirt and I was excited by his interest. The space between us was alive with desire and curiosity.

I don't know how long we could have gone on, but suddenly we were interrupted by my grandfather.

By turning the glider's back to the street to give ourselves the necessary privacy, we failed to observe that we were performing our clandestine explorations before the living-room windows, in full view of my grandfather's disapproving eyes. The boy was sent off, the glider turned properly around, and I was kept inside until my mother's return, when all hell broke loose. Shouts, slaps, brandishments. I was bad! Very, very bad! She was ashamed of me! I got the impression that the worst part of what I'd done was to be bad in front of my grandfather. I had shamed her in her father's eyes. I had disappointed her. She didn't know I was "like that." I don't think she ever forgave me. Even after she forgot about the incident, she never forgave me for it. I wasn't her perfect little doll anymore. I was bad and needed to be punished. "Spare the rod and spoil the child." I promise you, I may have been bad, but I was never spoiled.

Reprinted from Lessons in Becoming Myself by Ellen Burstyn by arrangement with Riverhead Books, a member of Penguin Group (USA), Inc., Copyright (c) 2006 by Matrix Movies, Inc. (f/s/o Ellen Burstyn).