Accessibility links
Taking the Boring Out of George Washington The first president is often seen as old, stiff and boring. These words are daggers to the hearts of those who run Washington's historic mansion. So a new center seeks to recreate the vibrancy and adventure of Washington's revolutionary life.

Listen
Taking the Boring Out of George Washington 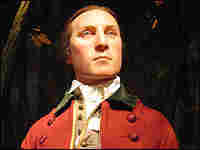 George Washington, depicted as a 19-year-old surveyor. His sloping, pulled-back shoulders are the effects of wearing a corset as a young boy, a fashionable practice of the time. Mount Vernon Ladies Association hide caption 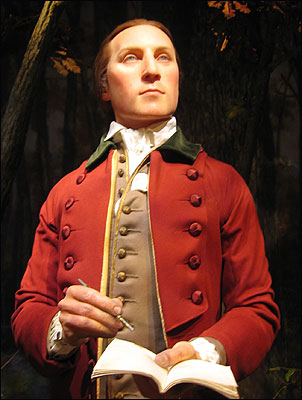 George Washington, depicted as a 19-year-old surveyor. His sloping, pulled-back shoulders are the effects of wearing a corset as a young boy, a fashionable practice of the time. 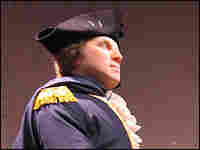 Washington atop his horse, Blueskin, at age 45 in a scene from the Revolutionary War's Valley Forge. Melissa Gray, NPR hide caption 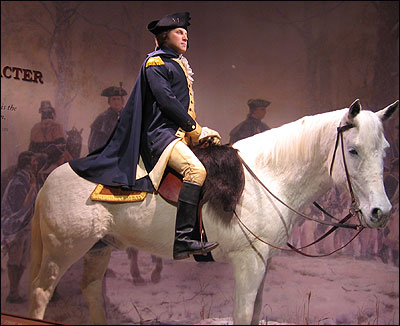 Washington atop his horse, Blueskin, at age 45 in a scene from the Revolutionary War's Valley Forge.

Our first president was never the life of the party. Couldn't stand small talk. And some say he didn't even like to be touched.

Yet in 1798 alone, more than 650 guests dined at his home. So what gives? Was Washington a secret bon vivant?

Scroll down for the answer. 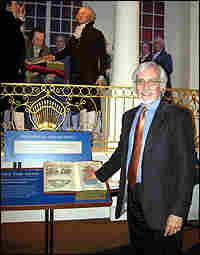 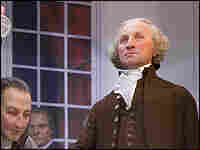 Washington at age 57, during his swearing in as the first president of the United States at Federal Hall in New York. The tension in his face is partly attributable to his dentures. Mount Vernon Ladies Association hide caption 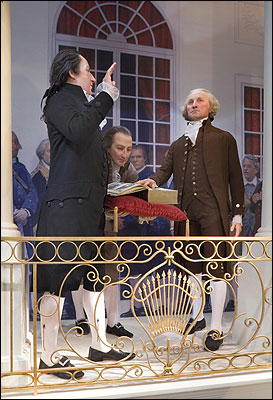 Washington at age 57, during his swearing in as the first president of the United States at Federal Hall in New York. The tension in his face is partly attributable to his dentures. 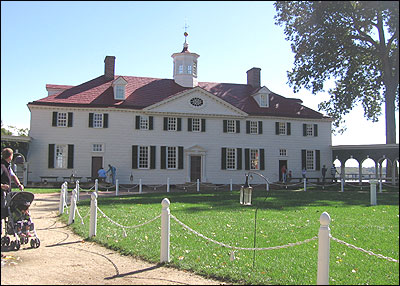 Outside Washington's Virginia plantation, Mount Vernon. The mansion has a majestic view of the Potomac River.

Outside George Washington's Mount Vernon home in Virginia, we asked visitors to take out a dollar bill and tell us their impression of the first president. We heard "leader," "sleepy-eyed" and "lawyerly."

These words are daggers to the heart of Jim Rees, executive director of Mount Vernon.

"There are some people who've commented that Washington must have been born old," Rees says. "Occasionally, they use the word 'boring.' And that really hurts us."

Rees says it's high time for a George Washington makeover.

"Washington was the most adventurous, the most action-oriented, the most athletic, and one of the most handsome of the founding fathers," he says.

Not to mention a great ballroom dancer. And so, a new interactive education center and museum will be opening at Mount Vernon Oct. 27, with theaters and galleries to try to convey the fullness of Washington's life.

The exhibit begins with what looks like a CSI forensics lab, with torsos made of foam, a skull, beakers and goggles on display.

Mount Vernon turned to forensic science, and to forensic anthropologist Jeffrey Schwartz of the University of Pittsburgh, to try to physically re-imagine Washington.

The idea was to create three accurate life-size wax figures of Washington, at age 19, 45 and 57. The trouble was, there are no portraits of Washington before the age of 40.

So Schwartz and his team worked backward in a kind of forensic time warp. They digitally scanned information from the famous bust of Washington by the sculptor Jean Antoine Houdon, the life mask made of the president, his clothing and dentures, and tinkered and molded his image on the computer to create what Washington might have looked like as a young surveyor in Virginia:

"Here we have him as he may have been surveying tracts of land," says Schwartz as he describes the exhibit showcasing the young Washington. "He's looking up from surveying equipment, because I didn't want his face to be hidden after doing all that work of making his face the center point."

It's a lovely face with bright blue eyes, a strong jaw, high cheekbones and good color, framed by auburn hair. He stands more than 6 feet 2 inches in a wooded glen as birds chirp in the background.

Washington's shoulders are pulled back and sloping, his belly rounds outward. There's a reason for that.

"Washington, as others of British background and his status, had been corseted as a boy," Schwartz says. The effect of the corset was to pull Washington's shoulders back and down, and increase the curve in the lumbar region of the spine.

Other galleries at the new center show Washington fighting during the French and Indian War, a copy of the dress Martha Dandridge Custis wore to their wedding, and Washington as a general in the Revolutionary War. He's astride his horse, Blueskin, at Valley Forge. By this point, he's 45 and has lost many of his teeth.

"Later in life, he was very reluctant to accept dinner invitations, unless the food was soft enough for him to squish with his tongue," Schwartz says. "I think what happened in this period, he was changing his diet to more fatty foods, more easily ingested food.... So you can see that the normal curve of belly that would have been accentuated sitting on horse, is a little more accentuated, which I think reflects the girth he would probably have achieved during that time period."

The last wax model of Washington shows him at 57 as he is sworn in as the first president of the United States, on the balcony of Federal Hall in New York. This is much the same face familiar to us from the dollar bill. His lips are tight, and there's some hollowness and tension around the jaw. That's because of his dentures, which were connected by springs.

"Here we know he had only one tooth," Schwartz says, "so he's holding these structures in his mouth which have springs and pressure and so on, so there is a difference in his face."

It cost more than $1 million to create these three wax figures. For Mount Vernon's executive director Jim Rees, anything that helps humanize George Washington is worth it.

"Although Washington has the most familiar face of any historical figure, people don't feel close to him," Rees says. "I think the No. 1 reason for that is the lack of photography. If you see those soulful photographs of Abraham Lincoln, you can't help but feel a connection to him. But with Washington, they are mostly very formal portraits. I think we were kind of putting Washington in the category of the flag and the eagle, in that he was a symbol of America. He really wasn’t a flesh and blood, breathing human being."

The three wax Washingtons will be on display when the new Mount Vernon visitors center opens Oct. 27. And yes, the famous false teeth are on display, too. Contrary to popular belief, they're made of ivory, not wood. 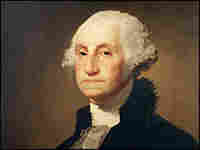 Would you want to have dinner with him? A 1796 Gilbert Stuart painting of George Washington. Museum of the City of New York/Corbis hide caption

toggle caption
Museum of the City of New York/Corbis 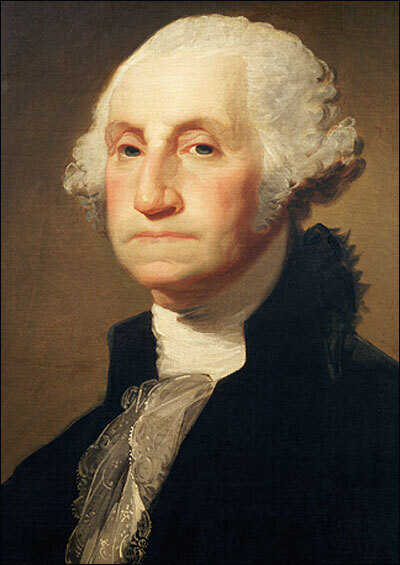 Would you want to have dinner with him? A 1796 Gilbert Stuart painting of George Washington.

Museum of the City of New York/Corbis 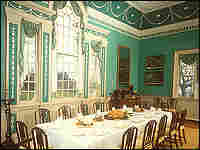 Washington's formal dining room at Mount Vernon. When he was home, he liked to have his main meal at 3 p.m. sharp, no ifs, ands or buts. Mount Vernon Ladies Association hide caption 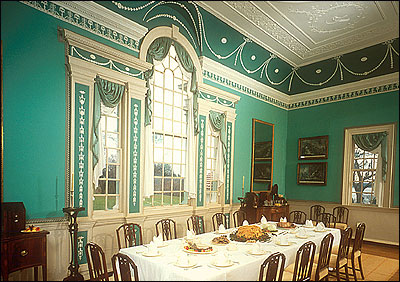 Washington's formal dining room at Mount Vernon. When he was home, he liked to have his main meal at 3 p.m. sharp, no ifs, ands or buts. 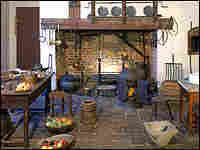 The kitchen at Mount Vernon. Washington's hospitality put a large burden on his slaves and servants, who also had to take care of the visitors' servants and horses. Mount Vernon Ladies Association hide caption 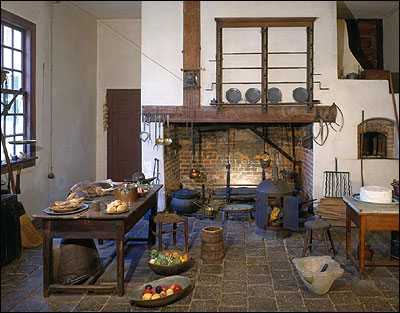 The kitchen at Mount Vernon. Washington's hospitality put a large burden on his slaves and servants, who also had to take care of the visitors' servants and horses.

Our first president was never the life of the party. Couldn't stand small talk. And some say he didn't even like to be touched.

One famous (and perhaps apocryphal) story is that at cocktail hour during the Constitutional Convention in 1787, Alexander Hamilton dared a delegate to go up to Washington, put his hand on his shoulder and ask, "How you doing, George?" Washington lifts the delegate's hand off him, and gives him a mighty staredown.

Yet in 1798 alone, a year after Washington's retirement from the presidency, more than 650 guests dined at Mount Vernon, his Virginia plantation along the Potomac River. True, that was an unusually large number. Some years, Washington and his wife, Martha, only entertained about 230 guests.

So what gives? A bon vivant or a cold fish? Thomas Jefferson declared that Washington had "neither copiousness of ideas nor fluency of words." John Adams personally "always marveled at Washington's gift of silence," says historian Joseph Ellis, author of the 2004 Washington biography, His Excellency. Were these remarks just part of a smear campaign by the other founding fathers, jealous of Washington's good looks, wealth and unmatched abilities with a horse?

A good many of Washington's hundreds of yearly dinner guests were uninvited. But the rules of Virginian hospitality, combined with Washington's own deep sense of duty, dictated that if travelers showed up on your doorstep, you had to feed them and even offer a room for the night.

In Washington's case, though, the travelers weren't just passing through.

He was seen as the greatest man in the world, says Ellis, and "everybody wants to make the pilgrimage to Mount Vernon."

Including Washington's mother, who asked if she could move in. He warned her off, saying his home was like a "tavern …. Scarcely any strangers who are going from north to south, or from south to north do not spend a day or two."

And he didn't just offer up a cold mutton sandwich. Well, he may have if you were poor. But if you were respectable looking, you were given a seat at Washington's daily 3 p.m. dinner. Amariah Frost, a visitor in 1797, recalled a "very good" spread, set with "a small roasted pigg, boiled leg of lamb, roasted fowles, beef, peas, lettice, cucumbers, artichokes, etc., puddings, tarts, etc., etc."

The elaborate Mount Vernon meals were typical for Washington's level of society, says Mary Thompson, a researcher at Mount Vernon who's written about the president's famed hospitality.

"They weren't doing anything special for these people," she says, except to make sure there was enough to go around.

Occasionally, Washington enjoyed the dinners, but sure, says Thompson, a lot of times, they were just "awkward."

"Some of the guests are so awed, they can hardly talk," she says. Nor did Washington always attempt to break the ice.

"He didn't feel the need to hold up his end of the conversation," Ellis adds. "A lot of people who visited him said, 'He's a great man, but he didn't say anything.'"

During one particularly tedious dinner with some senators, Washington allegedly drummed his knife and fork on the table to fill the silence.

This hospitality had a cost. Washington spent a lot of money on entertaining. What's more, the house was so crowded that he claimed he could only have a romantic dinner with Martha about once a decade. Yet he felt strongly enough about the tradition to recruit nieces and nephews to help out as he and Martha became too frail.

"It's part of the obligation, it's like having your portrait painted when you're a famous person, you have to do it 100 times," says Ellis. "He complained about it all the time, but he said, 'This is the price we pay for fame.'"

For his part, if Ellis could go back in time, he wouldn't make a social call on Washington. He'd go see John Adams instead.

"Adams, he would talk your ear off," Ellis says. "But Washington, you'd just sit there with him, sipping his beer."