Accessibility links
Bush Signs Border Fence Act; Funds Not Found President Bush signs the Border Security Act, a new law emphasizing enforcement over reform of the nation's immigration system. The act's key provision is a new 700-mile fence for the border with Mexico. But questions have been raised about whether the fence will be built, given that little or no funds were appropriated to the task when Congress approved the act in September.

President Bush signs the Border Security Act, a new law that emphasizes enforcement over reform of the nation's immigration system.

The act's key provision is a new 700-mile fence, planned for the southern border with Mexico.

But questions have been raised about whether or not the fence will ever be built: Little or no funds were appropriated to the task when Congress approved the act in September. 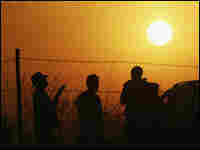 One of the most controversial proposals in the debate about immigration would create a high-tech fence along one-third of the U.S. border with Mexico. Approved by the House in December, the barrier is modeled on an existing 14-mile fence between San Diego, Calif., and Tijuana, Mexico. Supporters say the fencing would bolster homeland security and curb illegal immigration. Opponents decry it as a new "Berlin Wall," antithetical to the American ideal of an open society, and the plan has sparked protests by Hispanic immigrants across the country. NPR's Ted Robbins helps explain the proposal and existing strategies.

Q: How long has the San Diego/Tijuana border fence been in the works?

The fence has been under construction since 1993. Lawsuits and environmental regulations have stalled completion of the final 3.5 miles, which go through a tidal estuary next to the Pacific Ocean. Last fall, Homeland Security Secretary Michael Chertoff used his authority to waive some legal requirements that were bogging down the process.

The government says that about $39 million has been spent on the project so far, though some critics think that's a conservative figure. The Department of Homeland Security expects to spend an additional $35 million to finish the last leg of the fence. The Border Patrol, though, says the cost could be higher.

Q: What kind of security measures does it employ?

The 14-mile project is actually a double- and triple-fence. The first fence was built with surplus military airplane landing mats that were welded together. The second fence is called Sandia fencing, because it was developed at the government's Sandia National Laboratories. It's steel mesh, 15 feet high, with the top part slanted inward. In high-traffic areas, there's a third chain-link fence topped with barbed wire. In between the first two fences is a 150-foot "no man's land." The Border Patrol uses that area to station vehicles. There are also light towers, and remote video-surveillance cameras are being installed even as I write. Security is augmented by helicopters and hundreds of ground-based Border Patrol agents.

Some areas use closely spaced concrete pillars instead of steel mesh for the second fence. And the last 150 yards or so -- leading into the sea -- is made of steel pillars sunk into the sand.

Q: Has the San Diego border fence proven effective? Or are immigrants finding ways around it?

The Border Patrol uses the number of apprehensions to determine success. It's the best statistic available, but it's a somewhat crude figure, because every time someone is caught, that's considered an apprehension. The same person could be apprehended 10 times, then make it into the United States on the 11th try. But using that measure, the San Diego fence has been highly effective. Apprehensions along the fenced area plummeted from 100,000 in 1993 to 5,000 in 2005. Some people still try to cross, often scaling the fences using rope or steel ladders. And last January, agents discovered a tunnel more than 2,000 feet long and 85 feet beneath the surface that was being used by drug smugglers.

On the other hand, the number of people illegally crossing the entire U.S. border since the fence was built has actually increased. People have been entering through Arizona, New Mexico and Texas, and the fee for being smuggled in has skyrocketed during the last decade. Crossers say they used to pay a couple hundred dollars to a guide; now, it costs a couple thousand dollars.

Critics such as author Douglas Massey say barriers have disrupted previous patterns of migration: People used to come to the United States to work for a time and then returned home to Mexico. He and others say the increased cost and risk of crossing means that more undocumented immigrants are staying in the United States permanently and bringing their families with them.

More importantly, an estimated 3,600 people have died trying to cross the border -- mostly of heat or cold exposure in the Arizona desert.

Q: What measures are currently being used in other areas?

Urban areas on the border in Arizona (Yuma, Nogales, Naco and Douglas) currently use fencing constructed out of airplane landing mats. Outside of urban areas and along much of the rest of the border, the physical boundary consists of barbed-wire fencing. A "virtual fence" is slowly being built using vehicle barriers, motion-detecting ground sensors, remote-controlled cameras, helicopters, unmanned aerial vehicles, and Border Patrol agents driving all-terrain vehicles, motorcycles and SUVs.

Q: The House and Senate are calling to extend the border fencing through Arizona. What are the plans for this proposed new fencing?

The House passed a bill in December that called for a barrier, similar to the one near San Diego, along 700 miles of the 2,000-mile U.S. border with Mexico. That's the distance from Atlanta to Chicago. It would run across parts of California, Arizona, New Mexico and Texas.

The bill being debated in the Senate has an amendment calling for double fencing only in the urban areas in Arizona, which now have single fencing, plus a stretch of border west of Naco, Ariz. After complaints, the amendment's sponsor, Sen. Jon Kyl (R-AZ), removed the proposed fencing from a sensitive wildlife corridor. Both Senate and House versions call for increased technology to create a "virtual fence" in other areas.

Q: How much would extending the fence cost?

There's no official government estimate of how much it would cost to build a 700-mile-long border fence. Rep. Duncan Hunter (R-CA), the main backer of the fence plan, has been quoted as estimating the project would cost about $2.2 billion. That's roughly $3 million per mile. But Sean Garcia, an expert on fencing with the Latin American Working Group, says the costs are likely to be much higher. Garcia notes that Hunter severely underestimated the cost of the San Diego fence, which is the model for the larger fence. Hunter said the San Diego fence would cost $14 million, or about $1 million a mile. The first 11 miles of the fence actually cost $42 million, or $3.8 million per mile, Garcia says; the last 3.5 miles may cost several times that much because they cover more difficult terrain. And that's just the cost for building materials. Labor, surveillance cameras, sensors, lighting and road construction are not included. Plus, there are the potential costs of fighting any lawsuits that may crop up, and of buying land from private landowners.

Q: Who are the main backers of plans to extend the border fence?

Members of the House Immigration Reform Caucus -- roughly 90 members of Congress support the House proposal. An organization called "We Need Fences" also supports the 700-mile fence. In the Senate, the Judiciary Committee voted 12-6 to send its fence proposal to the floor. The 12 voting for the proposal included Republican John McCain (R-AZ) and Democrat Ted Kennedy (D-MA). The Border Patrol and Department of Homeland Security are asking for more fencing, as well as "virtual fencing," to block both immigrants and potential terrorists.

Q: Who is opposing the plan? What's the thrust of their criticisms?

Critics say security is a specious argument for building a border fence. They wonder why the same barriers aren't being suggested for the Canadian border, where potential terrorists have actually been caught. They say barriers help curb illegal immigration only where they are put, because people find ways around them. Environmentalists also note that extending security infrastructure into the Arizona desert will imperil fragile ecosystems. The Buenos Aires National Wildlife Refuge and Organ Pipe Cactus National Monument have been damaged by both illegal immigrants and Border Patrol vehicles. Impenetrable fencing, critics say, also blocks migration paths for mountain lions, coyotes, deer and other wildlife. And American Indian tribes in the region worry that the fence will prevent their people from crossing the border as they have traditionally done.

With additional reporting by Maria Godoy.